This exhibition marks the opening of the Pan-American Life Insurance Group Collection of corporate archives donated by the company to the Latin American Library in 2017.  The Pan-American Life Insurance Group (PALIG) is a major international financial services company headquartered in New Orleans and one of the leading insurance underwriters in Latin America for over 100 years.  The company was founded in 1911 as Pan-American Life Insurance Company (PALIC), and it was initially established to provide life insurance to employees of New Orleans-based fruit companies established in Central America.  That a company designed to serve a workforce based in Latin America would be headquartered in the Crescent City at that time was not a coincidence.  PALIC was conceived during a period of high aspirations in the modern history of commerce and trade relations of New Orleans, when the city was aggressively striving to regain its pre-Civil War status as a major hemispheric port.   It was a time of intense activity when local business and government leaders laid the institutional groundwork to stimulate commercial ties with Latin America as the most promising strategy to bring about the modernization of the city.

This exhibition underscores a growing understanding of New Orleans’ unique position among U.S. cities vis-à-vis Latin America and the Caribbean. Far from being a recent phenomenon, the city’s Latin American connections are but the continuation of over 250 years of cultural affinities and commercial exchange with the region, extending back to the late 18th century when New Orleans was part of the Spanish empire, and especially after 1803 when it was annexed by the United States. A silver lining amid the collective tragedy wrought by Hurricane Katrina in 2005 is a renewed focus on the city’s Hispanic population due to the spike in Latin American immigrants who came to rebuild the city.  That story, like the history of the Crescent City’s centuries-long relationship with Latin America and the Caribbean, is a complex one involving race, class, transnational cultural exchanges as well as commercial and political interests.  This exhibit aspires to shed light on one of those strands to inspire further research into this lesser known part of New Orleans’ modern history.   The Latin American Library at Tulane University, whose own story is also a direct result of this past, is honored to preserve and make accessible the historical memory of Pan-American Life Insurance Group, which is so deeply intertwined with this legacy.

This exhibit is co-sponsored by the Pan-American Life Insurance Group and The Latin American Library at Tulane University.

The Library’s gallery exhibits trace the rise and decline of New Orleans’ efforts to position itself as a nexus of hemispheric trade from the 1880s to the present.  This history serves as a backdrop to PALIG’s corporate trajectory, beginning with its founding and continuing through key moments of its historical involvement as an important agent in the city’s ongoing commercial and business relationship with Latin America.  These intertwined stories are told through the donated company records and other documents, as well as historical photographs, journals, newspapers, rare books and ephemera from the archives of The Latin American Library, Tulane University Special Collections and University of Alabama Special Collections.  The timeline along the extended gallery wall outlines a chronology of these stories, while the four exhibit cases flanking the entrance complement and expand upon people and events featured in the timeline.

The exhibit poster, shown below, was adapted from an advertisement of the Merchants and Manufacturers Bureau and New Orleans Progressive Union that appeared in several issues of a renowned Spanish-language New Orleans magazine, Mercurio, in 1915-1916.  The image is a figurative interpretation of the city’s aspirations to become the “Axis of the Western Hemisphere” (Eje del Hemisferio Occidental).  New Orleans is personified as a beautiful, larger-than-life woman perched atop a map of the United States, nestled within the contours of the globe.  Like a giant puppeteer, with tight fist, she firmly controls the strings of tiny ships sailing in every direction in the Gulf of Mexico, the Caribbean Sea and the Atlantic Ocean, encircling the Americas.  The suggestion is clear; the vision unilateral:  the Port of New Orleans will dominate the waterways of the Americas—and the world—from her privileged geographical position at the mouth of the Mississippi.  Of note is the large gap depicting the newly opened Panama Canal (1914), providing long-awaited commercial opportunities via Pacific sea lanes.  Also of interest are the modern high-rise buildings, perhaps factories with billowing smoke, that surround the central figure.   The words “New Orleans” are etched at right as if to underscore that this old city is on the threshold of a new era.  It is a modern metropolis, a hub of industry and manufacturing.  Thus, at bottom left are various instruments of machinery and industry—an anvil, a cog, a hammer, and a pick axe, behind a flaming torch. 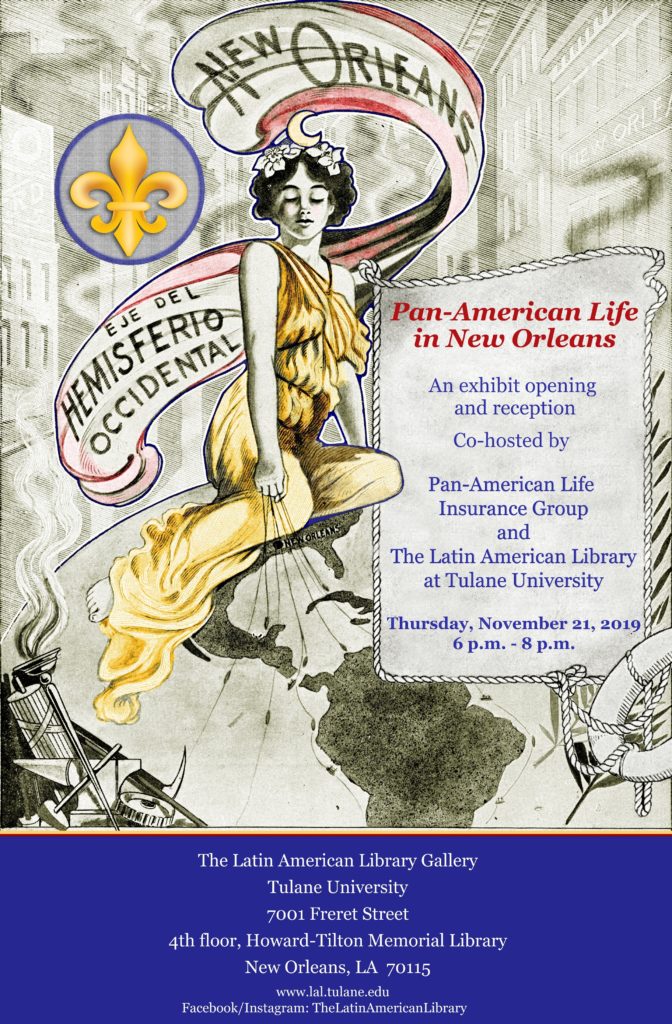 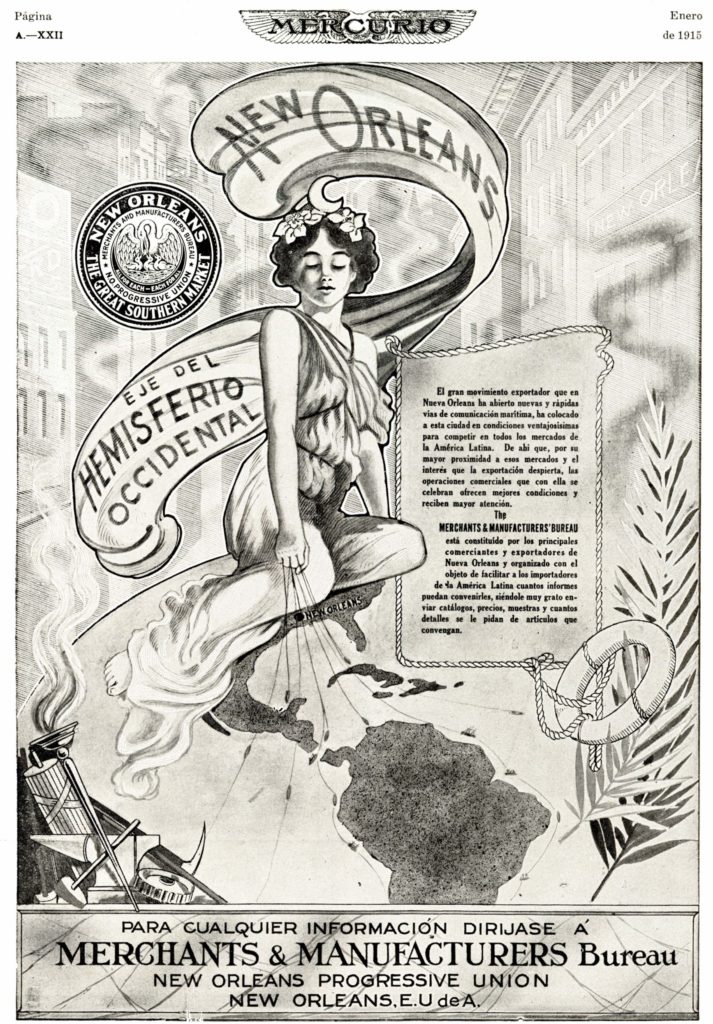 Merchants & Manufacturers Bureau ad from a January 1915 issue of the Spanish-language newspaper, Mercurio.

The exhibit poster is flanked on the main gallery wall by two additional images (shown below) that also depict figurative interpretations of New Orleans’ aspirations as Hemispheric Gateway.

Featured also in the Main Gallery exhibition (thumbnails in the upper right) are five images from The Logical Point, a monthly New Orleans publication singularly devoted to promoting the city—over that of San Francisco—as the site of a World’s Fair organized to celebrate the opening of the Panama Canal. 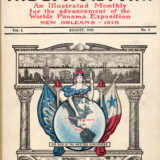 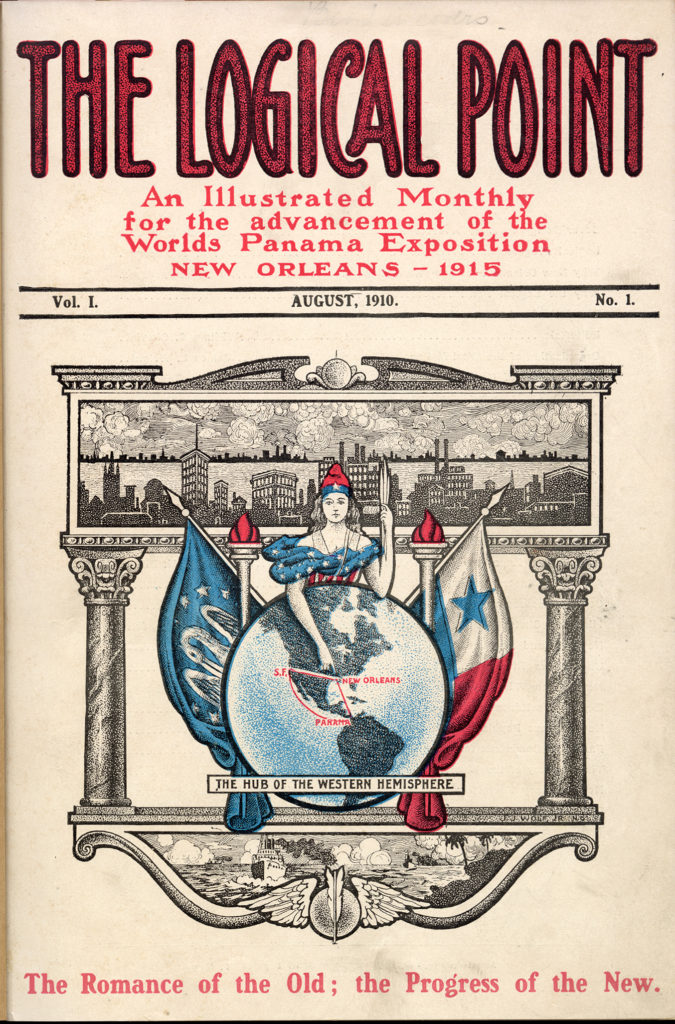 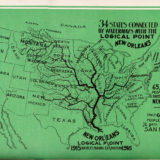 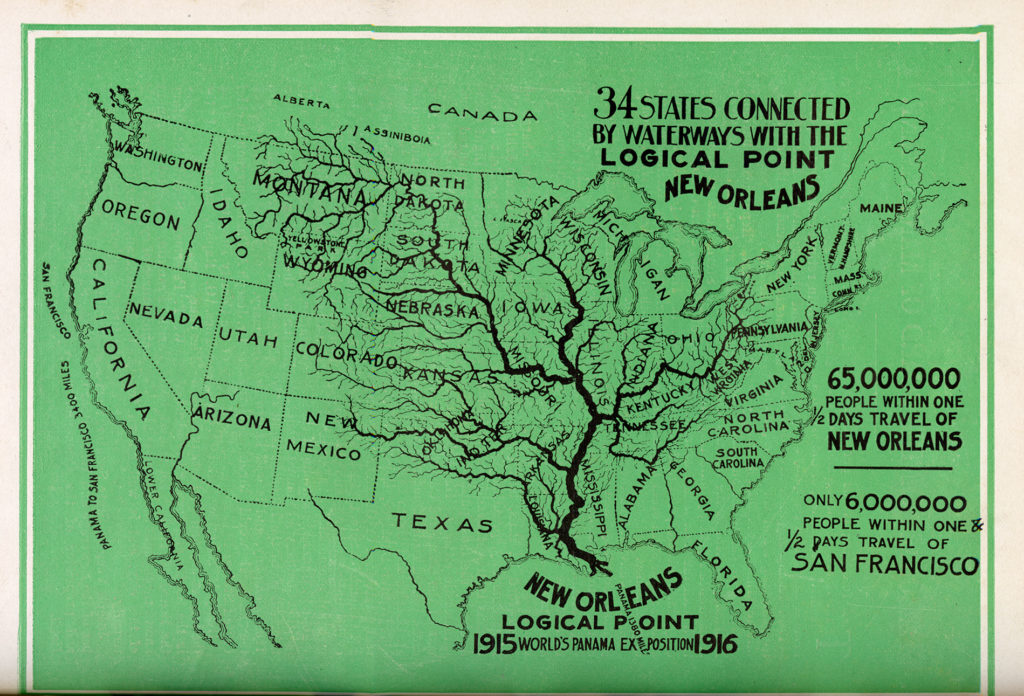 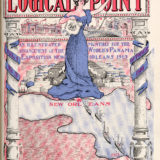 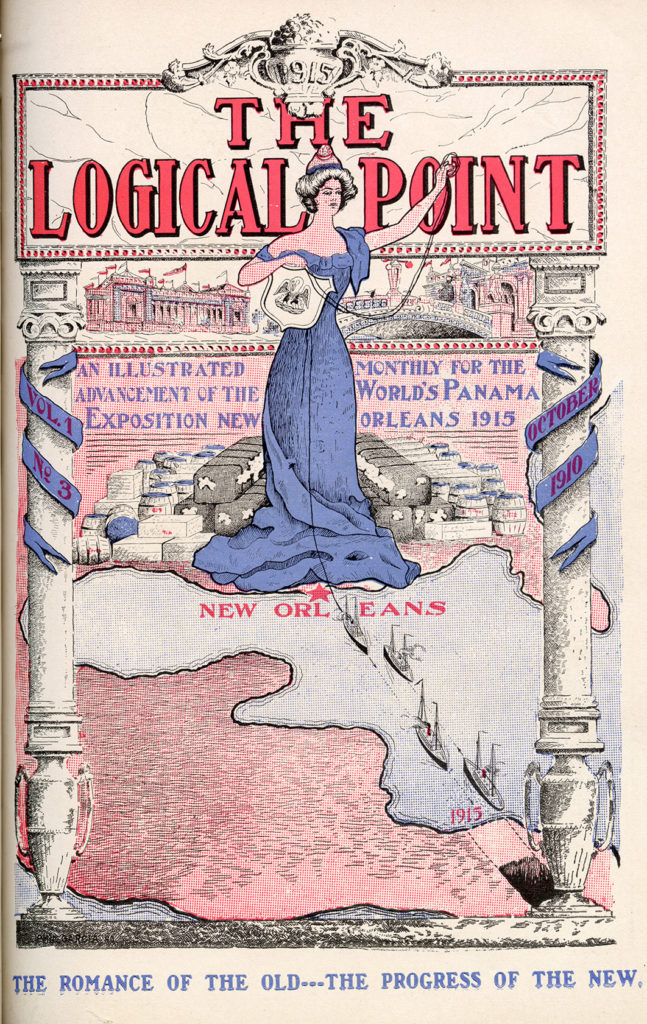 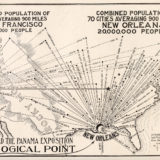 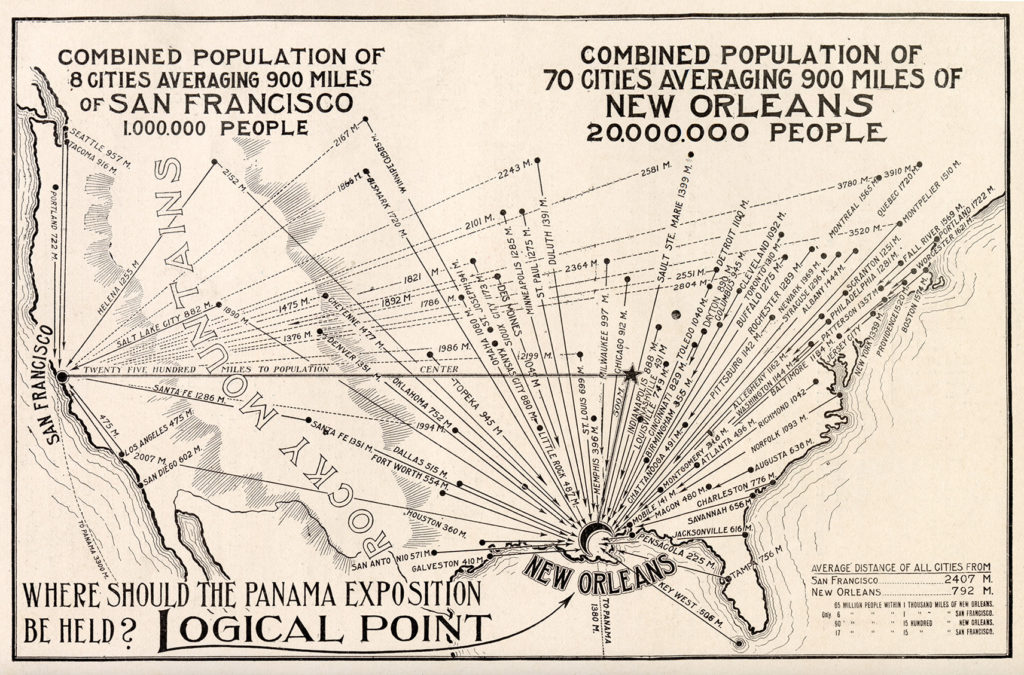 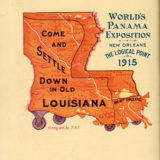 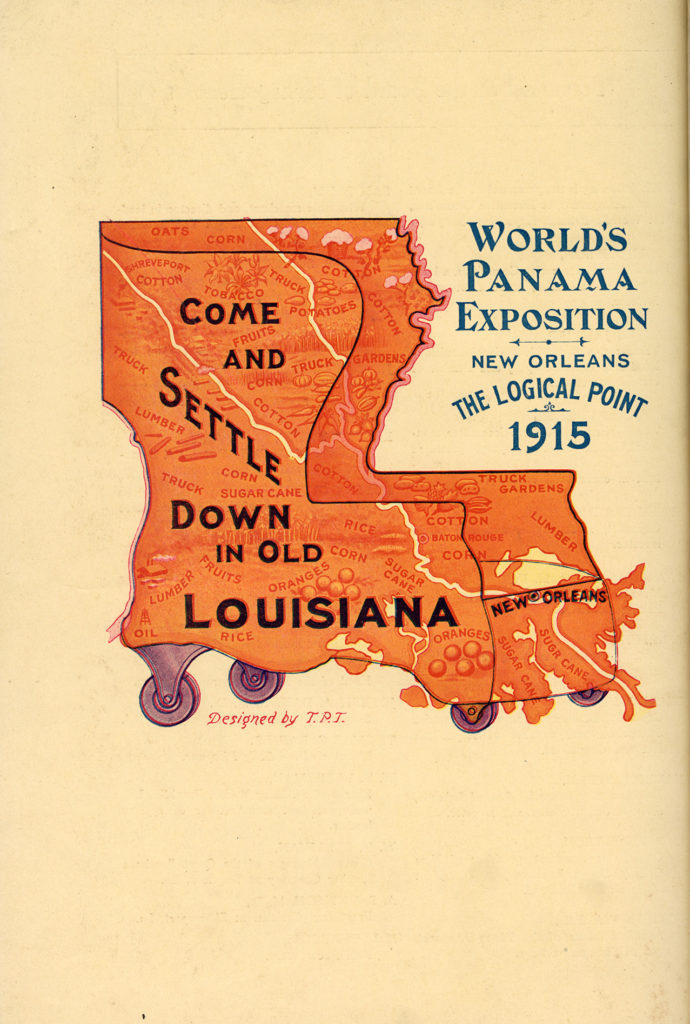