Of Seeing, Speech and the Childsphere: A Meditation into Jan Yoors’ New York Photographs

Children of the Streets: Reminiscences of Jan Yoors

Children of the Streets: Reminiscences of Jan Yoors / Of Seeing, Speech and the Childsphere: A Meditation into Jan Yoors’ New York Photographs /

1. The hardest thing to accept about photographs is often the first thing about them: that they show and do not tell, depict and do not describe, make-manifest and do not aver.

2. To be drawn into photographs is precisely to parry questions about appearances, and to find that the world’s surfaces are replete with illusions equally fragile and enduring.

3. To photograph—for an artist who might otherwise have sketched or painted or made a tapestry of an idea, all of which Jan Yoors did to great acclaim—represents a cunning turn. If a brush- or pencil-made image (in Emile Zola’s famous definition) offers us the world perceived through a temperament, a camera-made image teases us with the idea of the world perceived in spite of a temperament. To photograph—for an artist with a plenitude of means—is to broach the question: can we outwit our own perception?

5. And if I say that photographs are guileful things—activated desires posing as plain facts—and also dull things—half-statements prompting diffident opinions, or not prompting them—what kind of visual potency am I speaking of? Surely it seems something apart from the mode of painting, which proclaims visual potency constantly and without self-qualification.

6. If I had to name it succinctly, Yoors the draughtsman, Yoors the painter, Yoors the weaver seems to me drawn to photography for its contradictions, the repeatable-unrepeatable feat of making common visions for common purposes while making enervated truths uncommonly elegant. I cannot prove this hypothesis any more than I can prove that a city appearing as a dot in an atlas is actually a human hive running amok, or that watchmakers are regularly driven witless by the burdens of shrinking time to clockfaces.

8. And I venture: what Jan Yoors means by a “moment” is neither the parceling of consciousness into instants nor instants prolonged into, say, epochs, rather he means the gladness of our own awareness when we stand things up, perpendicular to complacency, and gaze out along the horizon of the inner life we have not yet come to claim.

9. For Jan Yoors, it is not necessary to say how a photograph begins or ends, except to say that it arises in the act of looking away from where we know we are already.

10. I venture: Jan Yoors took three short steps for every long one, before eight side steps and eventually, no doubt, a memory of innumerable dead in the old world, and he wandered through ten faces for every eleventh he recognized as typical of the others, and did not count the waves of what visions of home New York sprung, though surely he bent and extended his stamina to the tripping point.

11. The frame’s worth of seeing a photograph offers casts us beyond the edges of the picture itself, first into the flung-open realness of the streets that were, and then the ebbing kingdoms of whatever we call the present hour.

12. With a camera in his hands, Jan Yoors beholds a particular wonder: children more humanly able than the fate-bound adults whom childhood presses from its mold. His children—how can I put it?—catch shadows in nets. And this is remarkable. And for we who can see such a thing for what it is, sorrow passes through our gates until there is nothing left—childhood in memory, childhood as memory, human-being slipping toward human-having-been.

13. From Yoors’ pictures, I switch on the light: our narratives, I see, are made from our severances, emotional and philosophical alike. It is not our paintings we live by, the grand and aloof statements of our envisionings, rather we derive our stories from our photographs, the necessary illusions cut away from time and from space. And if so—the test, I see, is to keep the necessary illusions from collapsing into mere illusoriness.

16. Looking with a camera toward the semblances rather than the certitudes, Yoors approaches the core admission: seeing owns nothing, photographs fix nothing, the dayshifts and nightshifts of the pictures captivate and hold-captive… nothing. Rather this: the light reflecting from the surfaces happens by way of some other, intrinsic light, linked to the psyche pushing its way between glances, and perception hurtling through the shutter blades to distinctly humble points. In Yoors I see: it is not enough to brave one’s own conclusions, rather the world demands also that we console them—with sighs.

17. I venture: to seek earlier generations moving forward and backward among the irrelevant objects, steadily supplying the unthought new generations (we ourselves!) with queries and the near-palpable hum of the sidewalk—to seek all of this is to pursue a glowing confusion: the sense of the human soul made bright enough to see.

18. Strange and beautiful things must be left as they are. There is nothing else to do with the pictures and guesswork metaphysics of Jan Yoors, the gypsy-hearted weaver, the also-painter and also-writer, except to ponder them. He has left the links of the chains unlinked. He has left photographs to behave like photographs—frames that will not defend borders. He has left us the childsphere as it might condense, for awhile, within us. 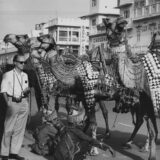 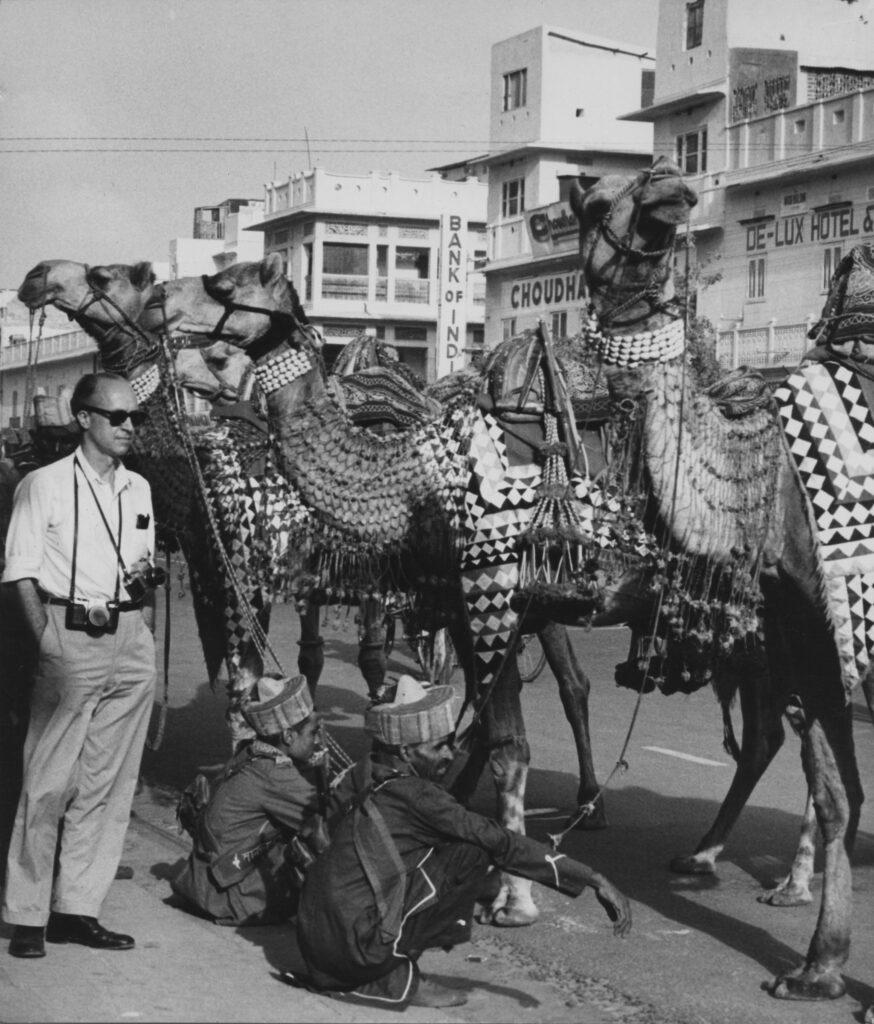 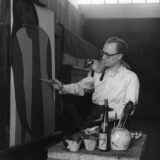 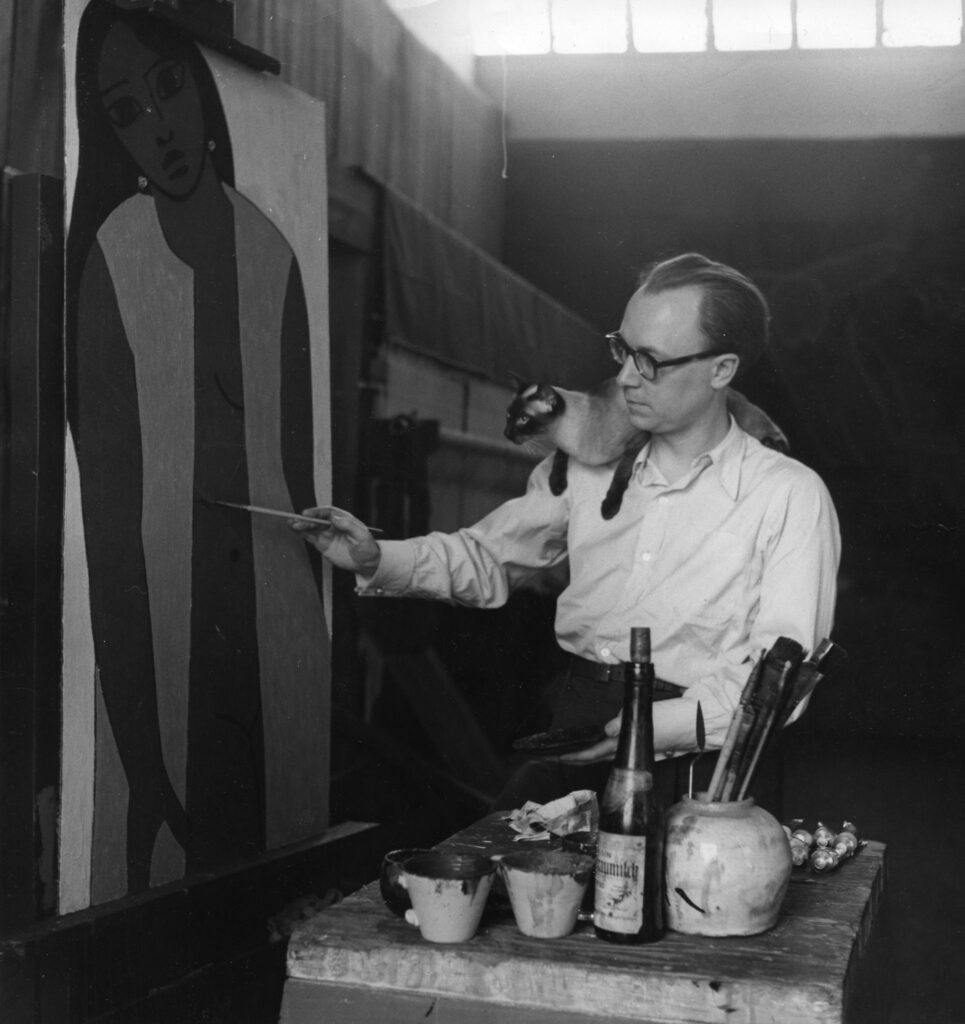 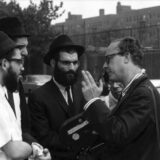 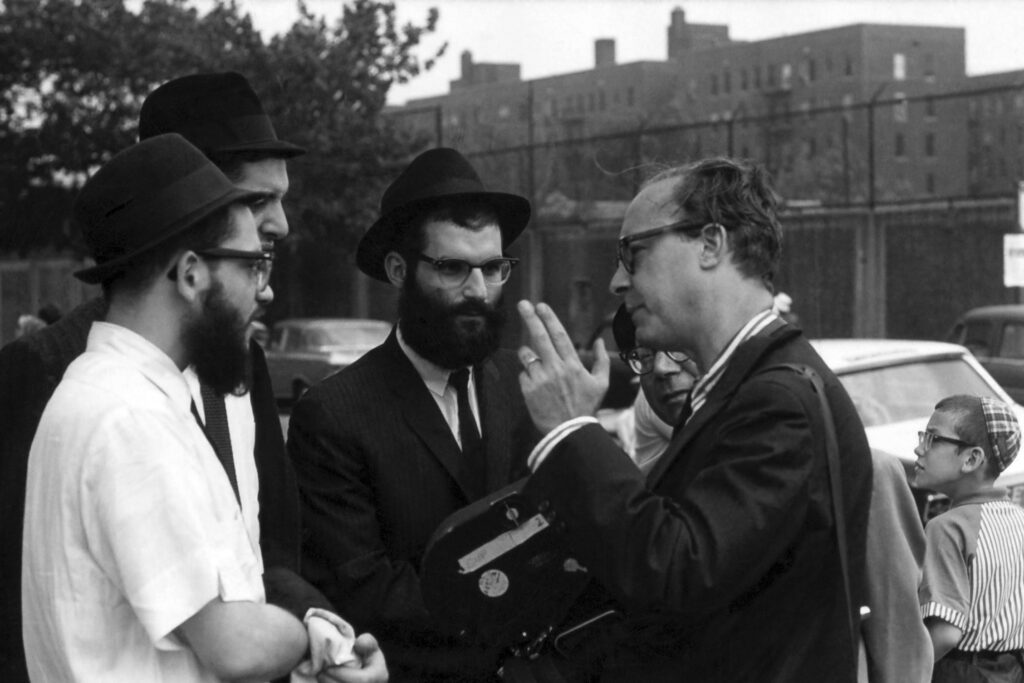 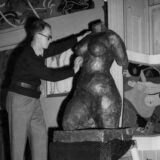 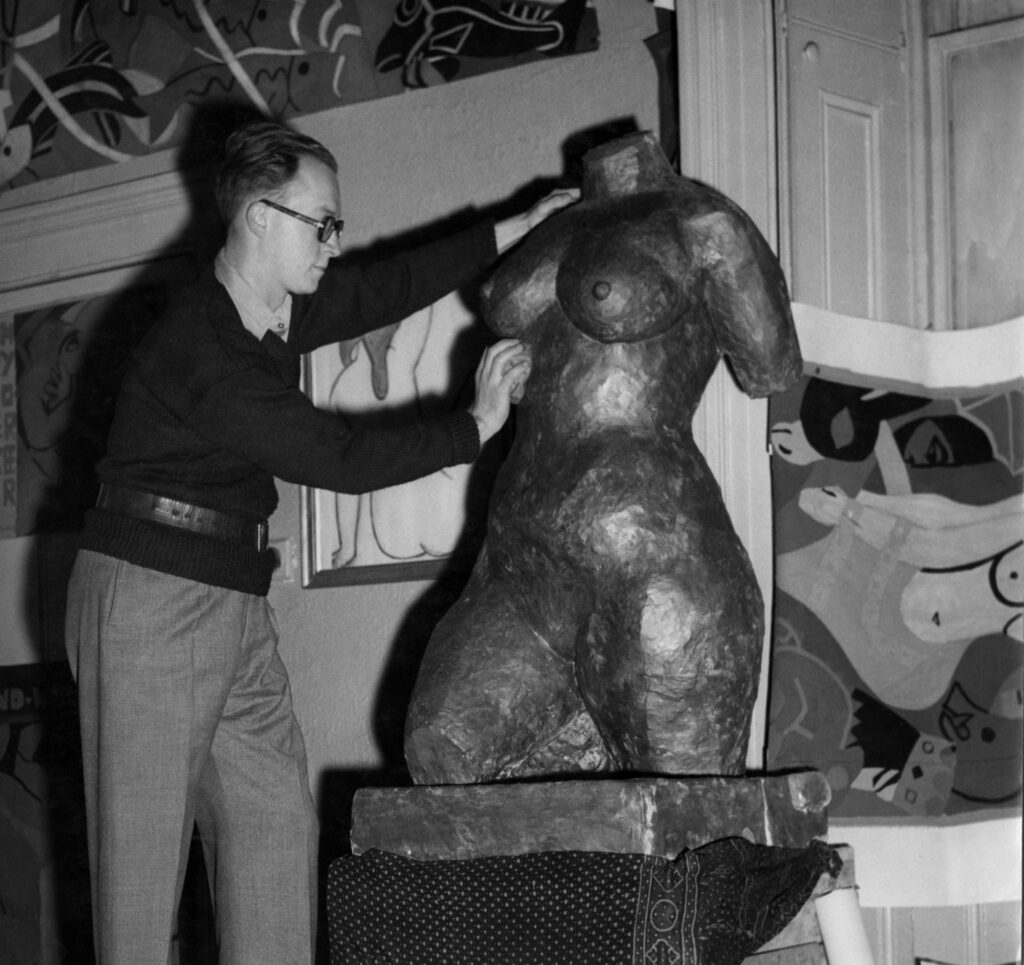 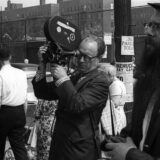 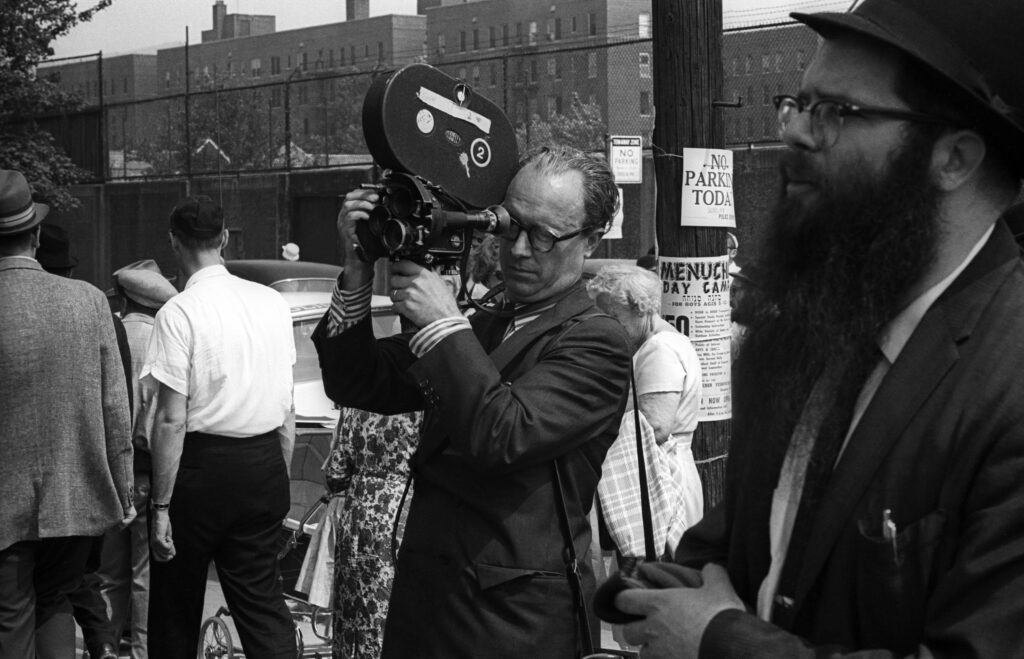 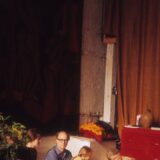 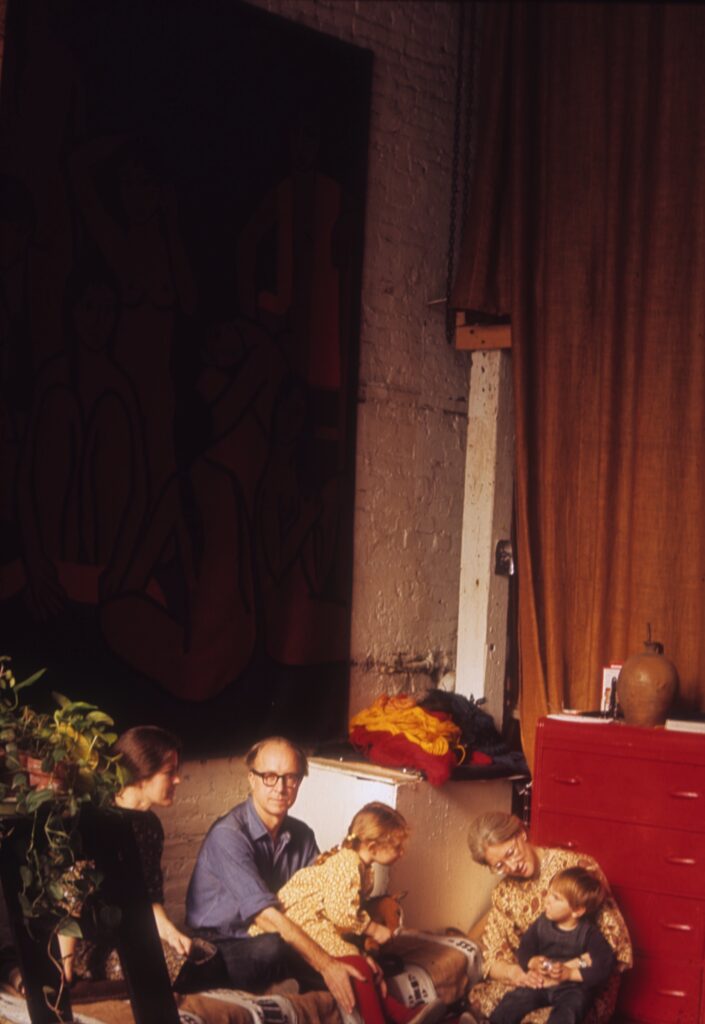