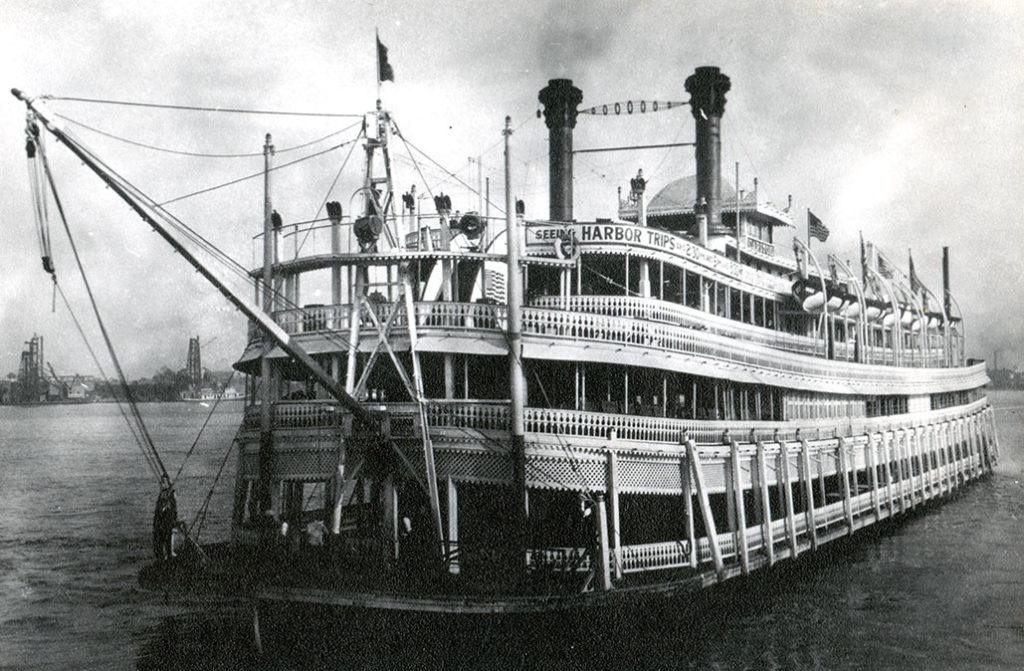 In the 1920’s, the Capitol became the flagship of the Streckfus musical excursions. Typically, the steamers followed three routes from St. Louis on the seasonal trips to St. Paul, Pittsburgh, and New Orleans. Although these “tramps” consisted primarily of one-nighters, there were longer stays in the larger towns along the Mississippi and Ohio Rivers. The trip to New Orleans began sometime after Labor Day. Following the winter season there, the return trip to St. Louis occurred in May or early June. Excursions to St. Paul were summertime affairs, as were the trips to Pittsburgh. Musicians working the excursions earned $35.00 a week in the 1920’s and were responsible for finding their own living quarters while in St. Louis and New Orleans. In other venues, the musicians were permitted to sleep on the boat. On the Capitol, they were quartered in cabins in a bunkhouse on the top deck. Each cabin had two bunks, and, according to one sideman, “they were the smallest bedrooms in existence.” In most cases, only one meal a day was provided. Only one recording of Marable’s S. S. Capitol Orchestra exists: it was recorded for OKeh in New Orleans on March 16, 1924 under the name of Fate Marable’s Society Syncopators, featuring “Frankie and Johnny” and “Pianoflage.” One of the principal soloists on “Frankie and Johnny,” cornetist Sidney Desvigne, later organized a band of his own on the Capitol, but after the mid-1920’s most of the Streckfus riverboats were using bands assembled in St. Louis under the leadership of Marable, Charlie Creath, and Dewey Jackson. The Streckfus company found that most New Orleans musicians did not want to work in St. Louis–perhaps they missed the red beans and rice–so replacements tended to be recruited from that home port, except during the winter season in New Orleans.