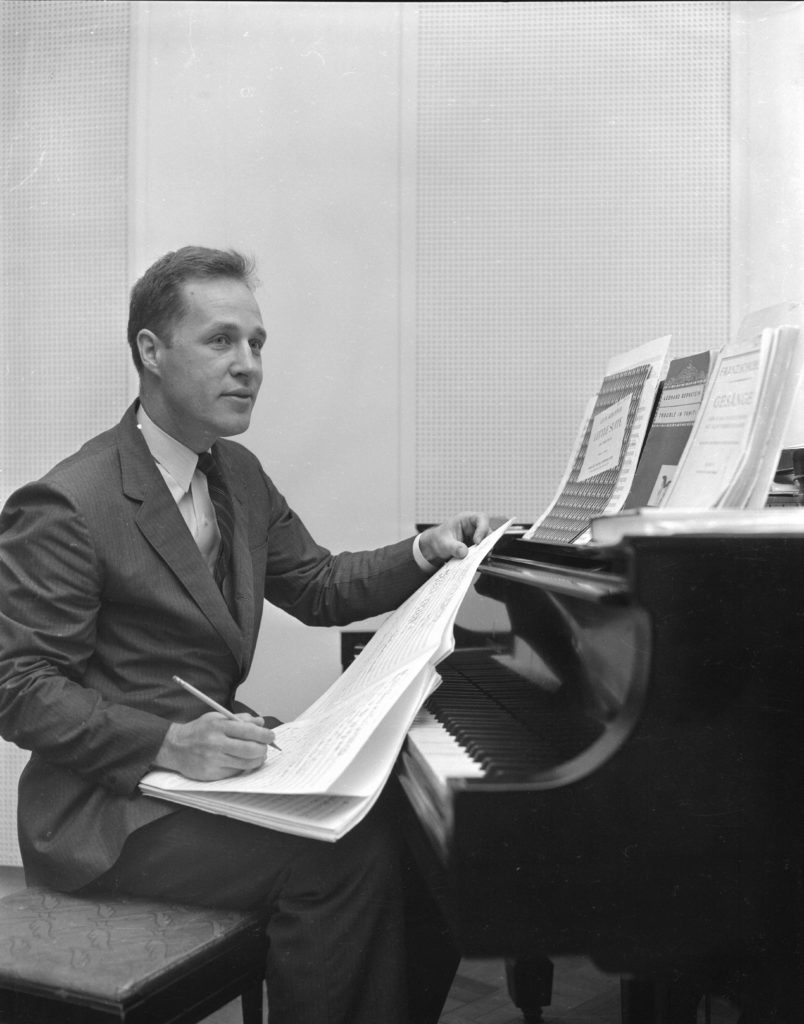 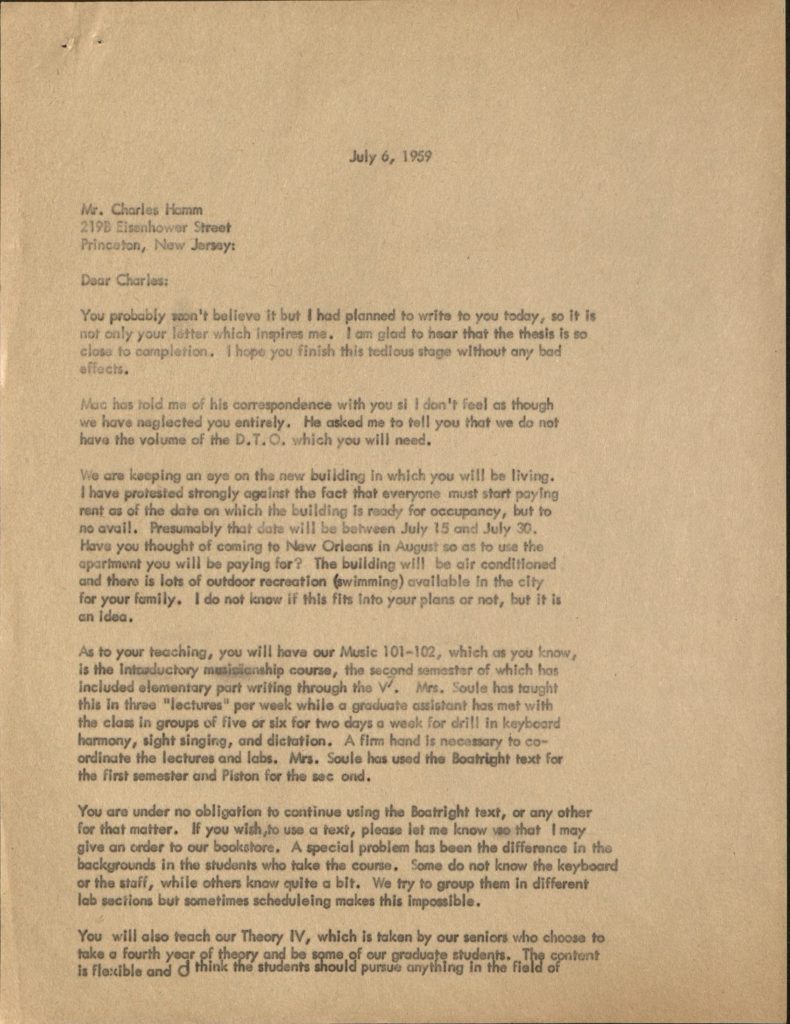 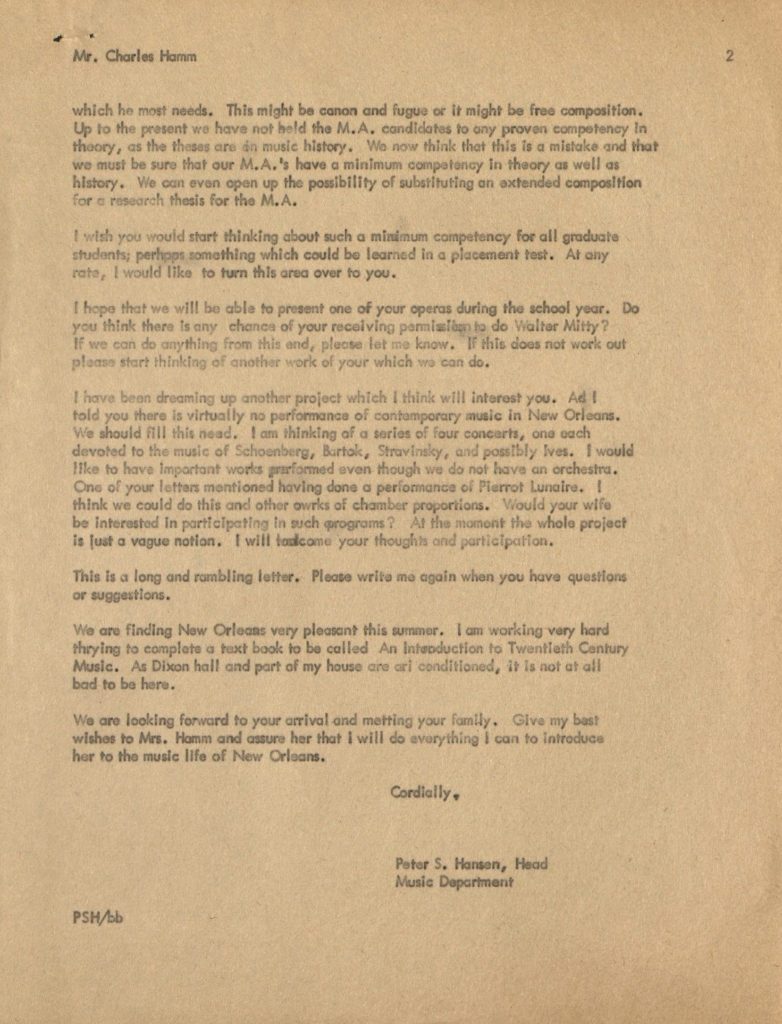 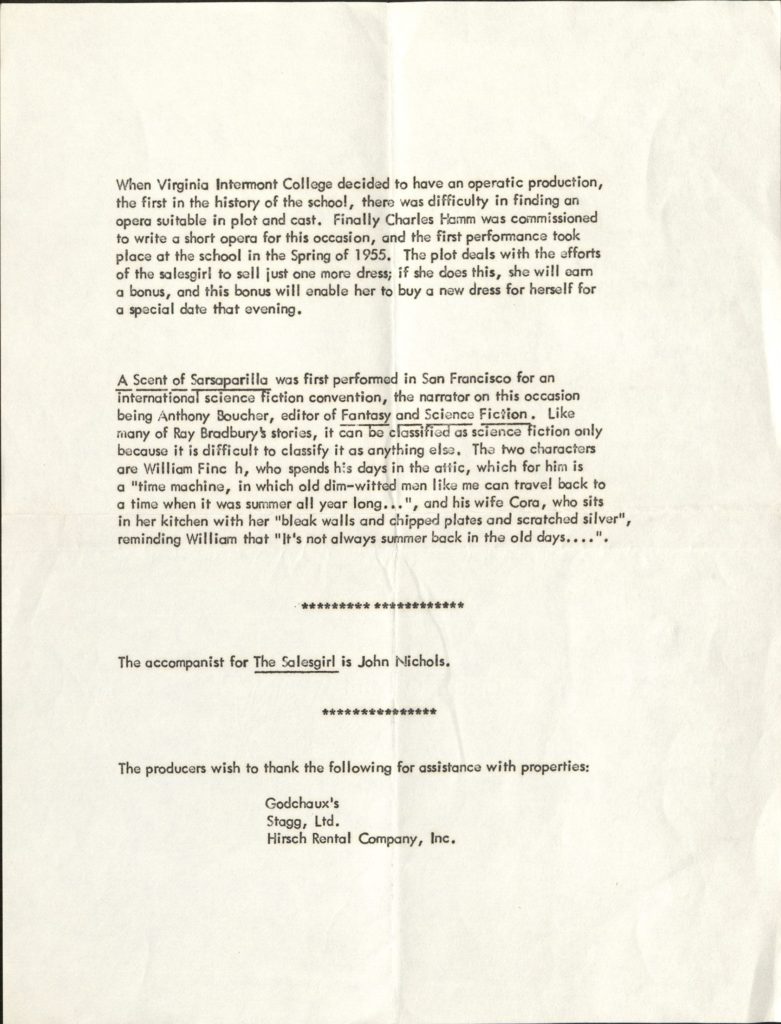 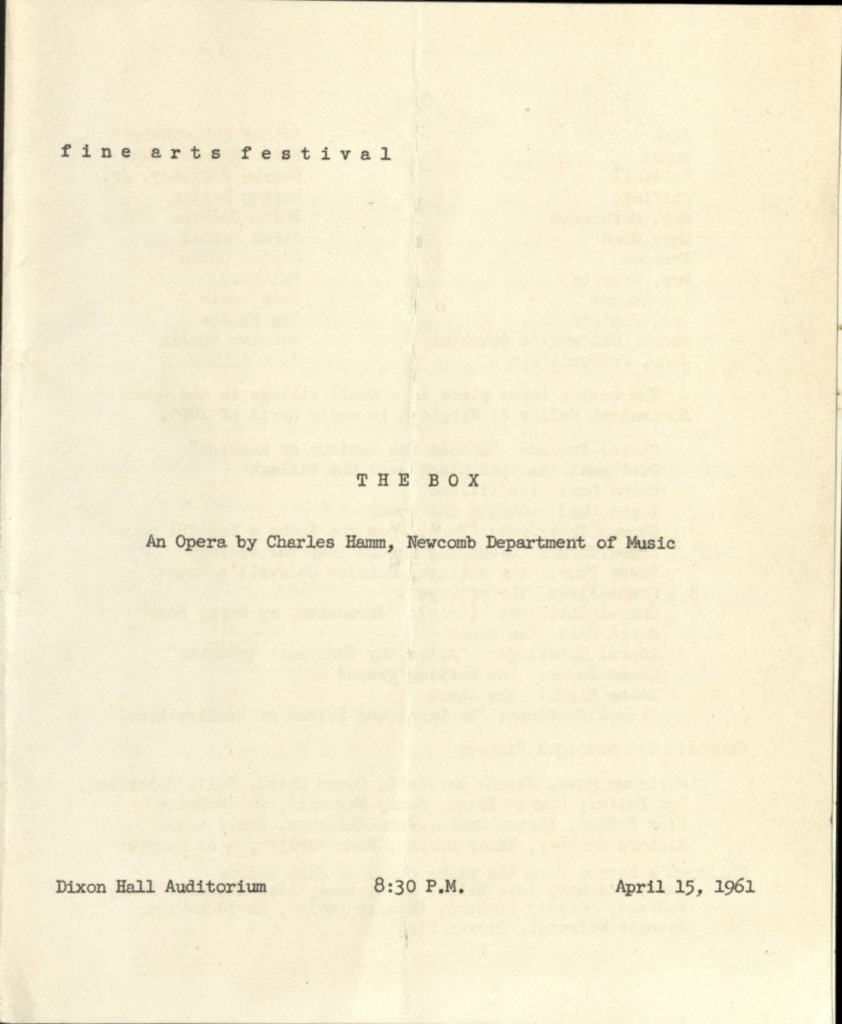 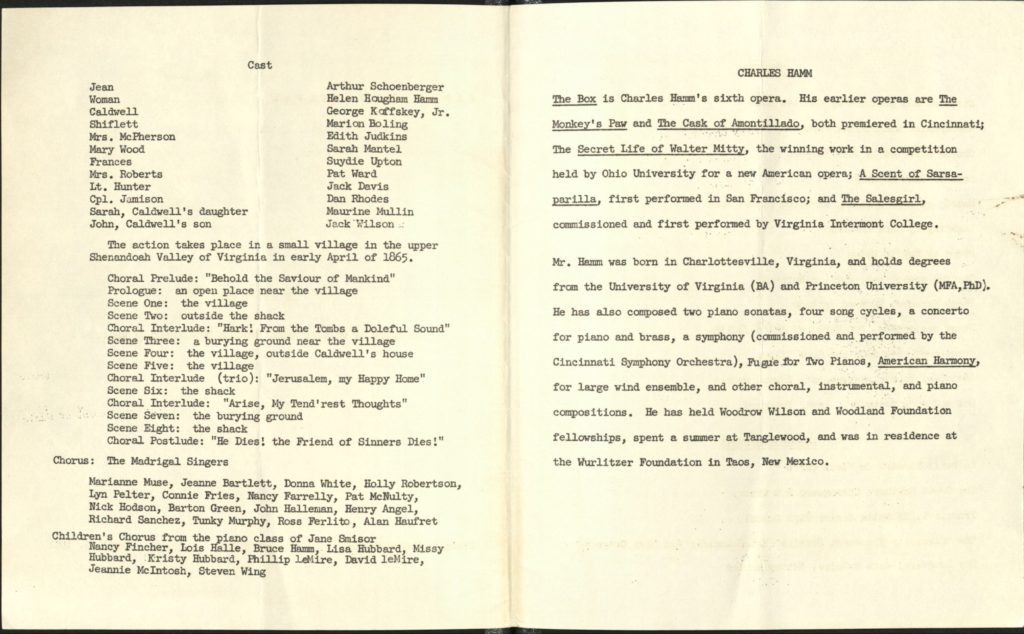 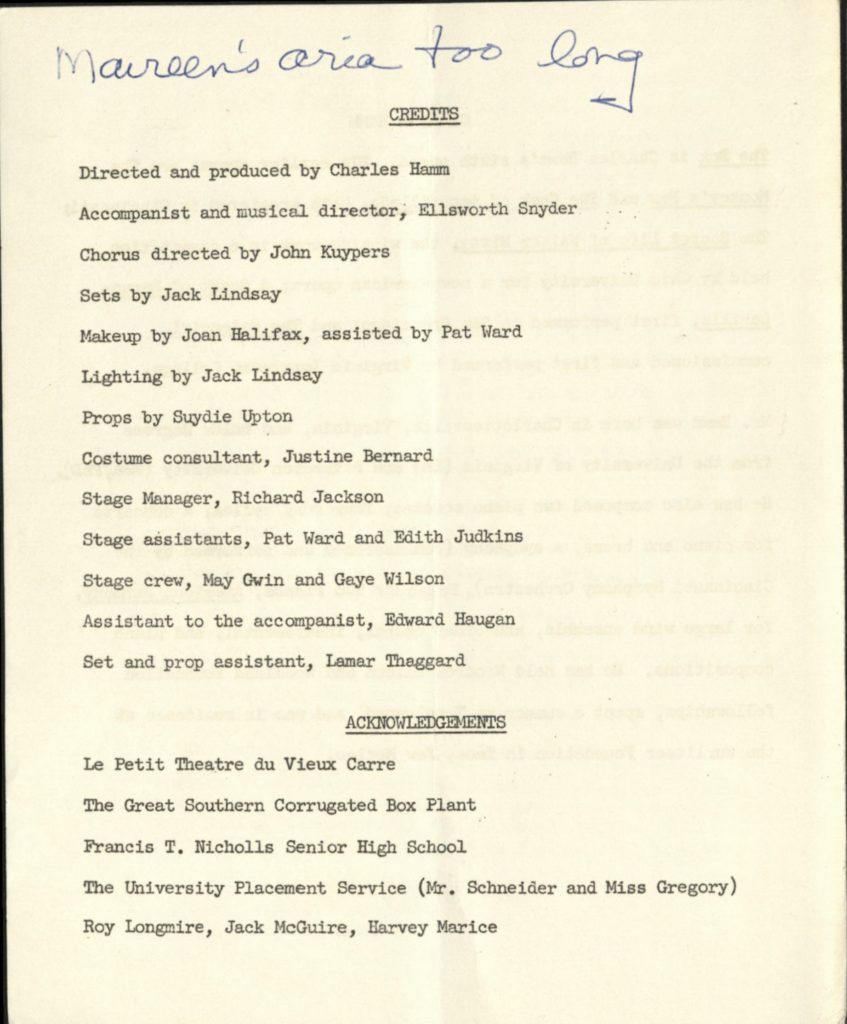 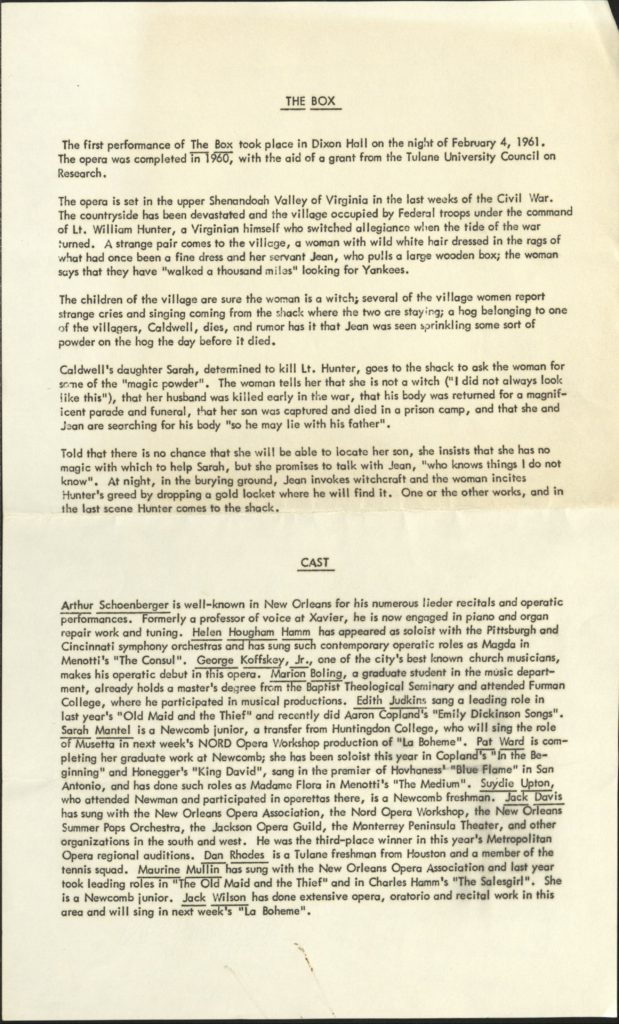 Opera productions dramatically slowed following Burnham’s departure. Indeed, there are surviving records of just four full opera productions by Opera Workshop and two concerts of selections from various operas. There is no record of opera performances for the remainder of 1958 or for the entire year of 1959. Opera Workshop doesn’t pick up again until 1960 with two performances. There were one to two performances in 1961 and 1962. The next record of an Opera Workshop performance doesn’t appear again until 1967. Concert programs preserved and stored in University Archives reveal a continuing tradition of presenting operatic scenes, but there was no full opera production at Tulane again until the arrival of Frank Monachino in 1967. The first opera produced during this interim period appears to be Gian Carlo Menotti’s Old Maid and the Thief. According to the Times-Picayune reporting on the upcoming production, this February 1960 performance marked the New Orleans premier of this highly popular one-act radio opera from the 1930s. This particular performance was directed by Joe Knight, a graduate student in music composition. The arrival of Dr. Charles Hamm in 1959 seems to have opened a new door for Opera Workshop. Hamm, a musicologist best known for normalizing the study of American popular music in academia, had also written several chambers operas. In July 1959, then department chair Peter Hansen, wrote to Hamm requesting that he produce some of his operas with Tulane Opera Workshop. While there is no record of a performance of The Secret Life of WalterMitty as Hanson had suggested, we do know that Opera Workshop performed a total of two operettas and one full opera by Hamm. On April 29, 1960, Opera Workshop performed two of Hamm’s operettas, The Sales Girl: A Silly Little Opera in One Act and A Scent of Sarsaparilla: A Lyric Chamber Opera Based on a Story by Ray Bradbury. The following year Opera Workshop along with guest performers from the New Orleans community performed The Box, an opera Hamm completed while on the faculty at Tulane thanks in part to a grant from the Tulane University Council on Research. 1962 saw three performances by Opera Workshop. In January, music graduate student William Schlottmann conducted first a selection of arias from various Mozart operas including Marriage of Figaro, The Magic Flute, Cosi fan Tutte, and Don Giovanni. Schlottmann again led the Opera Workshop with a May performance of Martinu’s The Marriage and his own adaptation of Bach’s Coffee Contata for opera. In 1962, the new head of Newcomb Voice Department, Robert Bernauer, led another production of operactic scenes, this time from Otello, La Traviata, and La Boheme.