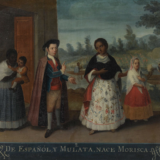 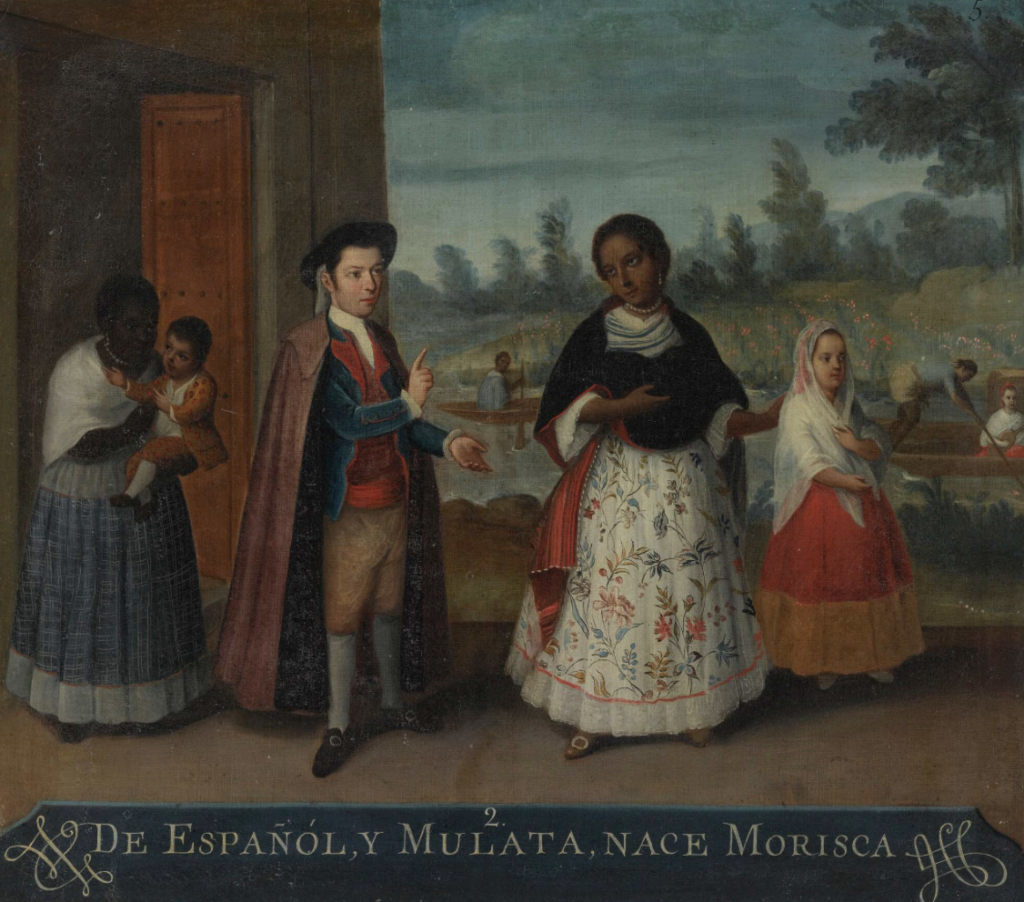 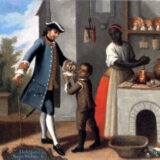 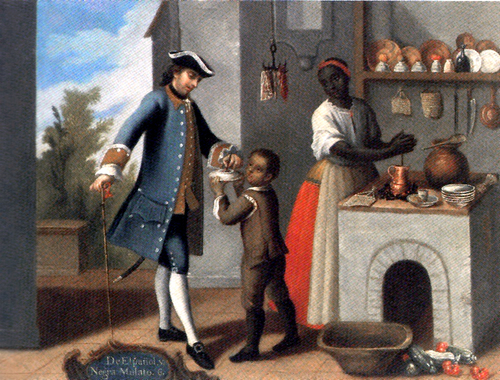 There is little scholarship about this work outside of a catalogue note written for a Sotheby’s auction for this painting and the rest of the series in 2017. Sotheby’s described the work as the following: “unfolding against the charmingly rendered backdrop of the ancient floating gardens of Xochimilco. The canal system supporting these gardens, which originally supplied food for inhabitants of Tenochtitlán (Mexico City), were adapted by the Spanish as transport routes for agricultural goods but also as gardens for recreation. Alcíbar depicts a woman playing the lute as she is steered in a small canoe alongside bountiful floating fields and tradesmen, capturing the changing nature of the city and the close relationship between commerce and leisure.” The catalogue note pays no attention to the Spanish and Mulata figures in which the painting is entitled after or the Black African woman caring for the Morisca child. The interracial couple split the composition while gesturing towards each other in a calm manner. The Mulata woman wears a black shawl with a white blouse underneath. It is paired with a flowy white skirt adorned with flowers of various colors. She is further ornamented with a pearl necklace and matching earrings. To the left of her, the Spanish man wears a neat red shirt with brown breeches. His outfit is complemented with a red and blue jacket, purple overcoat, and black hat. Further left lies the most interesting part of the composition: a morisca child and a Black African woman. The child is tidily dressed like her parents. The Black African woman wears a white shirt with a matching white shawl and a long blue and white skirt. Her clothes are also well-kept and demonstrate either her wealth or her proximity to wealth. This notion is furthered by her also wearing a pearl necklace and earrings identical to the Mulata woman. At first glance, the Black African woman seemed to be laboring for the Spanish and Mulata couple as the caregiver for their Morisca child. By the eighteenth century, most Black African women were no longer in bondage. Despite their “freedom,” Black Africans still faced rampant racism and sexism in the private and public spheres. This social limitation kept them shackled to the same roles of servitude that they occupied as enslaved people (Fuelling 17). Her compositional placement in the background by Alcibar also alludes to this idea. However, her clothing and adornments are completely oppositional to these notions. She is dressed too finely to simply be serving as a nanny for the child. The matching necklaces and earrings seem to suggest that, rather than a nanny, she is the mother of the Mulata women. What then is Alcibar telling the audience? Is he portraying racial mixing as an acceptable means to generationally rid New Spain of Black Africans? Given the initial promotion of racial mixing before the Bourbon reforms, the answer to these questions is likely yes. Through marriage, Black Africans would begin to elevate their class standing and obtain the adornments of the wealthy such as the pearl necklaces and fine clothing. Ultimately, Alcibar seems to be advocating for racial mixing as a mechanism to elevate all of New Spain.

Between 1770-1780, Mexican painter, José de Pàez produced a set of casta paintings that included this work, De Español y Negra, Mulato. In this New Spanish domicile, de Pàez, renders an orderly open-air kitchen with three figures: a well-dressed Spanish man, a neat young Mulato boy, and a domesticated Black African woman. The Spanish man is framed by a serene backyard with a bench and shrubbery that appears to be wild but somehow not overgrown. In his right hand, de Pàez places a cane that does not seem to support him in a necessary way but rather for aesthetic purposes in order to convey to the viewer that this man was of some social distinction. His head is adorned with a black tricorne and luscious brown hair in a ponytail. The man is clothed in a blue coat and a brown waistcoat underneath. The blue coat is matched with blue breeches of the same shade as well as white stockings. His feet are poised in an elegant tendu as if to present his stylish buckled black shoes to the viewer as another way to propose that this is a sophisticated man. Through his refined dress and graceful posture, de Pàez is overtly communicating that this Spanish man is an upstanding citizen and deserving of respect. In the far-right side of the composition, the Black African mother looks on while preparing hot chocolate. She is positioned­­ in an orderly kitchen to anchor her physical body in her role as a housewife. De Pàez renders her with a white blouse on to contrast and emphasize her coal black skin. Her facial features are rather delicate and could have been another way to convey her domestic position in her household. Her hair is hidden from the viewer but neatly tucked away under an orange headband. She wears a brightly colored yellow and orange skirt that matches the headband. The skirt is cinched at the wait and accentuates her hips in a subtle way to possibly emphasize her fertility to the viewer. She stands over a small stone oven in her beige apron while rubbing a molinillo (which is another name for a stirring device) back and forth between her hands in a copper pitcher. The pitcher is surrounded by small devices of chocolate. A small brown sack, a small cup on top of a saucer, a stack of white plates, and a larger pitcher with a wooden spoon placed across the opening are all placed on the small stove. There is also an assortment of kitchen items placed neatly above the stove while a large basket and various vegetables are placed on the floor directly in front of the stove. Although the Black African women’s clothes are neat, they are not nearly as fine as her husband or son’s. Unlike the Black African woman in Alcibar’s painting, she is not adorned with any jewelry or fine clothing that would display her wealth and upper-class status, but she is depicted performing domestic chores. Perhaps the elderly qualities of Alcibar’s Black African woman rendered her harmless to the racial hierarchy. In constrast, Páez made a distinct choice to anchor his Black African woman in a role of servitude without any of the trappings of wealth to reinforce her inferior status. This stylistic choice would have eased the growing anxieties of elite Spanish audiences and signaled to them that the racial order they wished to see in the world would remain despite racial mixing.