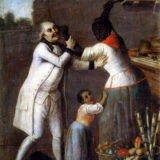 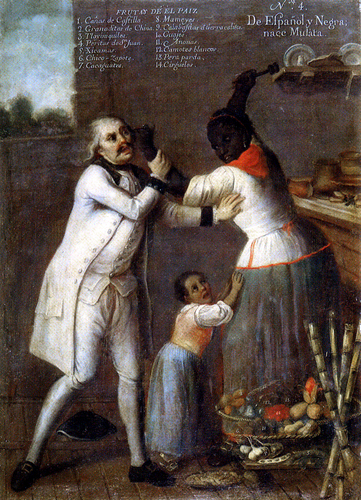 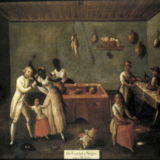 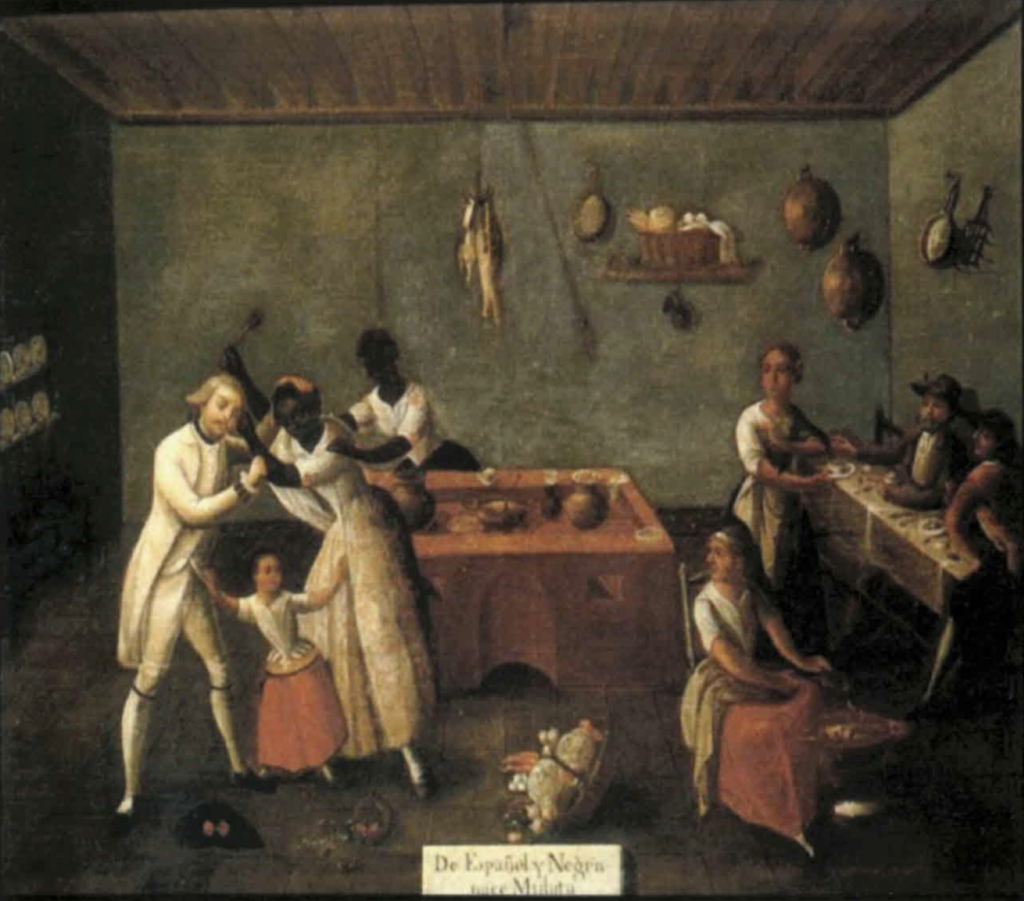 Andre Islas’ paintings frequently negotiate location and the mannerisms and physical appearances of his characters to highlight the stratification of New Spanish society and encourage his viewers to buy into said stratification (Fuelling 26-27). In El Español y Negra, nace Mulata, Islas depicts an elderly and balding Spanish man attempting to evade a vicious attack by his Black African wife within the domestic space of a kitchen. She aggressively wields a kitchen utensil at the man’s head; an instrument associating the Black African woman with the domestic labor expected of her gendered status in society. The woman angrily grabs a fistful of the man’s hair as well. Given the social class differences between Black African women and Spanish men, it seems almost unlikely that such an interaction would have ever taken place. However, according to Evelina Guzauskyte, Islas renders the man as approaching baldness because it was a clear symbol of “lost honor” that would have been easily recognizable as such by the Spanish elite viewers (Fuelling 26). Guzauskyte also states that fallen hats are another symbol of lost honor (Guzauskyte 182). Isla includes this trope of the fallen hat that further emphasizes that this man is not respected. Their Mulata child completes the rather balanced triangular composition as she is wedged directly between the couple. The young girl frantically attempts to stop her violent mother from attacking her father. Her mouth and generally frightened facial expression suggest that she is screaming to encourage her mother to stop as well as pulling on her mother’s dress. Despite the tense altercation depicted, Islas still includes an orderly arrangement of numerous fruits native to New Spain to depict the bountiful lands of the colony at the bottom of the composition. Each fruit has a tiny number painted inside it with the corresponding key at the top of the composition. Also, the rest of the kitchen behind the Black African women is completely orderly with every kitchen utensil in its proper place. It seems rather contradictory to include fruits, as they are typically associated with fertility and growth, and a neat, tidy kitchen. These attributes are seemingly oppositional to the violence depicted in this tense marriage. Above the dysfunctional family, the viewer’s eye is led to a window in the upward left corner. It seems to be connected to the Spanish man’s status as the opposite side of the composition features kitchen accoutrements that are clearly intended to be associated with the Black African woman. Violent casta paintings typically depicted feuding families in such “in-between” locations such as these to reify the “broken boundary between civilized domesticity and disrupted nature” in these interracial relationships (Guzauskyte 183).

In another painting by an unknown artist, the artist seems to almost exactly replicate the same scene as depicted in Islas’ painting. The artist’s painting was created at least twelve years after Isla’s and thus, he or she almost certainly encountered Islas’ painting. Again, the viewer witnesses a vicious assault by a spoon-wielding Black African woman against her elderly Spanish husband while their Mulata child desperately tries to stop the encounter. The kitchen is in a perfect, orderly state, and another fruit basket is arranged neatly. The artist even duplicates the costumes that the characters are wearing. However, this painting differs in its setting. Rather than the violent encounter occurring in an “in-between” location, the unknown painter places the scene within a large kitchen or restaurant setting with several on-lookers. Directly behind the assault, another Black African woman is attempting to stop the encounter. On the opposite side of the composition, three other figures look on curiously. It is unclear what race these figures are meant to depict. However, their skin tones are much different than the coal blackness of the Black African women and the pale whiteness of the Spanish man. They most closely resemble the Mulata child. However, it is difficult to pinpoint without a shadow of a doubt because the different types of racial mixings at this time were so vast. The presence of the on-lookers is a unique intervention by the unknown artist. Insults were commonplace in New Spain, but the presence of an audience was more critical than the actual insult (Fuelling 9). Although Islas’ painting would have publicized the insult and resulting loss of honor to its elite Spanish viewers, the unknown artist takes the humiliation a step further by placing obviously racial mixed individuals to witness the attack of a Spanish man at the hands of the lowest member of society: the Black African woman.

Carrera analyzed the first painting as Isla intentionally “attempting to show not only the violent character of this kind of person [the Black African woman] but also the concrete and the abstract ability of Black African blood to dishonour respectable Spaniards” (Carrera 87). This sentiment can also be applied to the painting by the unknown artist given the almost identical scene was rendered. Perhaps then, Islas and the unknown painter depicted the man with a balding head and his hat on the ground and not to directly reflect upon the man’s character but rather to display the effects of being in a relationship with a Black African woman. In all of Islas’ twenty-four surviving casta paintings, there are nine that depict woman-on-man violence and eight that feature mutual violence (Guzauskyte 188). These statistics imply that domestic violence is gendered rather than being specifically linked to race. However, five of the nine are of Black African women. The strife rendered in Islas’ and the unknown painter’s images seems to be a warning to the Spanish elite class of the fate that begets them if they marry Black African women specifically. This familial relationship between the Spanish man, Black African woman, and the Mulata girl was the rule and not the exception and to be avoided at all costs by the Spanish elite audience.