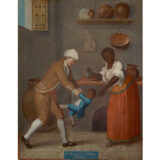 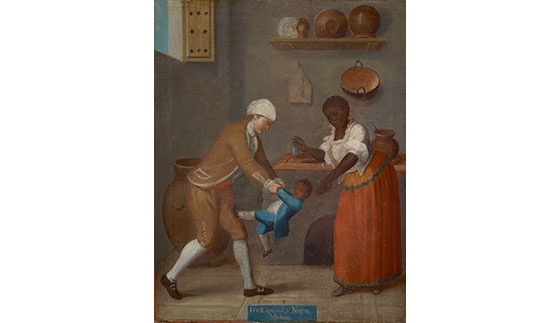 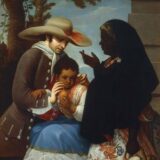 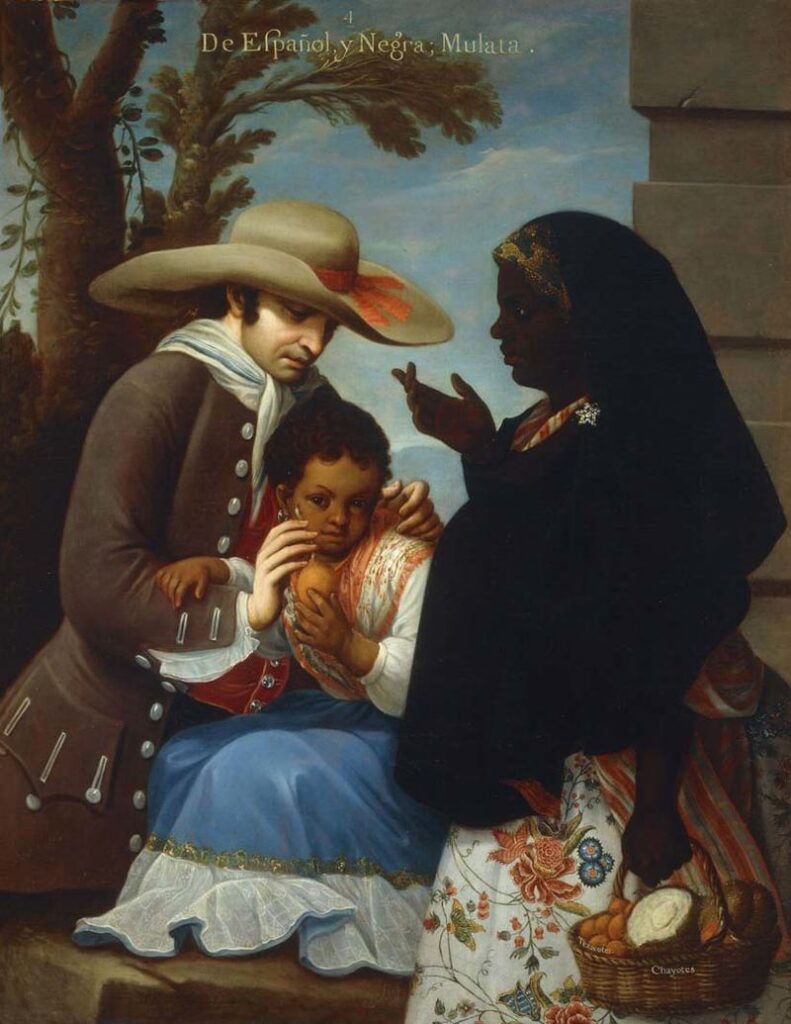 This composition depicts a playful interaction between a Spanish husband, Black African wife, and their Mulato child. The males in the composition are dressed rather finely in similar white blouse and socks. The Spanish man wears a brown jacket with matching brown breeches while his Mulato son wears the same ensemble but in a jubilant blue.  In contrast, the Black African woman in Clapera’s painting is stylistically similar to the woman depicted in de Pàez’s De Español y Negra, Mulato.  Both are rendered in a white blouse and orange skirt while unadorned by any jewelry. Their clothing is neat but not fine in a manner indicative of wealth. They are also situated in tidy kitchens with similar pots and kitchen utensils. These factors contribute to the Black African female body being intrinsically linked to domestic servitude. However, the Black African woman is seen here directly engaging in leisurely activity. Clapera seems to depict her participating in a playful encounter with her husband and child rather than performing domestic chores. This choice by Clapera completely combats her supposed inferior status. This work was completed several decades after the Bourbon reforms began which begs the following question: why were these supposedly anxious Spanish and New Spanish audiences purchasing works that did not depict the “lowest members of society” in positions fitting of their role in society?

Perhaps the most fascinating work in the exhibition is From Spaniard and Black, Mulatto Woman (De Español y Negra, Mulata). This oil on canvas was completed by Miguel Cabrera in 1763. The composition positions the family outdoors in an “in-between” space as mentioned previously. The interracial family creates an inverted triangle with the Spanish father and Black African mother at the top while the Mulata child is wedged below them. The Mulata child stares directly at the viewer with a childlike slyness while seated in a beautiful outfit of blue, orange, gold, and white. The Spanish man wears a white shirt paired with an elaborate brown coat with silver buttons. However, his head is adorned with wide sunhat commonly reserved for the lower class that completely contrasts with the rest of his outfit. Cabrera directs his languid, almost solemn gaze downward and leads the viewer’s eye directly to the outstretched hand of the Black African woman. In comparison, her gaze is direct and bordering defiant at the Spanish man. This interaction seems to suggest her dominance in their relationship. Her head bears a bright scarf while her outfit is mainly covered by a black shawl that drapes over her head and shoulders to her stomach. However, she is depicted as heavily adorned with a colorful blouse, matching skirt, and a brooch of some fine metal. Her dress is European while her head scarf is of indigenous origins (Fuelling 18).  Through her cosmopolitan style of attire, Cabrera clearly depicts her as a worldly woman. Her marriage to her Spanish husband has elevated her status. However, in her left hand, Cabrera places a fruit basket which would have indicated that she frequently the markets, an activity reserved for the lower class and dishonorable women (Fuelling 18).  Through her fruit basket and his sunhat, Cabrera communicates a discontinuity in their social status. Although they may have some of the finery of the wealthy, they are in fact not wealthy and only posing as such. The eyes of the elite Spanish audience that Cabrera created these paintings for would have immediately identified these odd fashion pairings and assigned them to a lower status to themselves.