The Archaeology of Mardi Gras

The Archaeology of Mardi Gras / Krewe of Petronius / 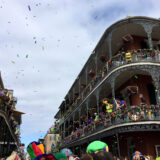 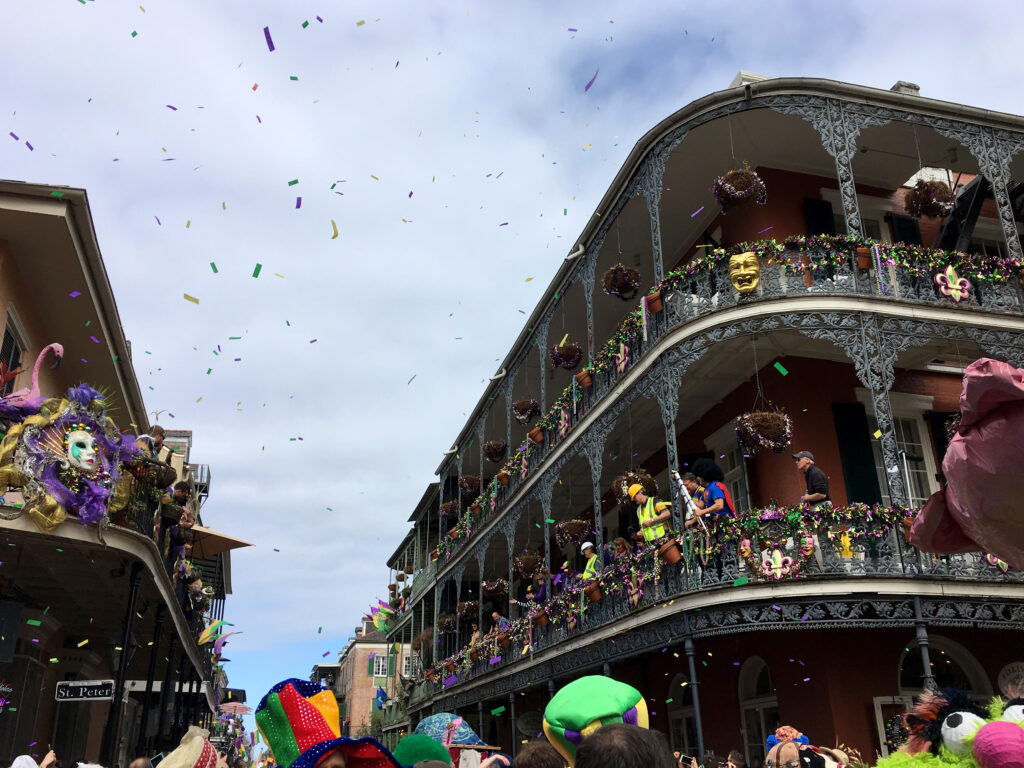 The Krewe of Petronius is the all-gay krewe in New Orleans, preceded by a krewe named Yuga. In 1962, one week before Petronius held their first ball, the Yuga ball was raided by police, resulting in the decline of the Krewe of Yuga. Petronius, being the only other gay krewe in the 1960s, grew as a result, but still had its share of difficulties. In the mid-1960s, Petronius began the campaign to acquire a charter from the city; they reasoned that if all male straight krewes such as Bacchus could parade then Petronius had the right to parade as well. After a long battle, the Krewe of Petronius became a legitimate krewe in 1966. Ever since, the krewe has hosted their annual masquerade balls every Mardi Gras season, accompanied by after-parties and celebrations that promote the gay community. Petronius has become known for their elaborate and lively festivities, attracting support from both the gay community and other advocates. The krewe has paved the way for beneficial change in LGBTQ history and has managed to remain a strong establishment, despite the multitude of challenges they have faced, including police raids and the AIDS crisis.

Drawing of the King of Petronius by Jim Keyes 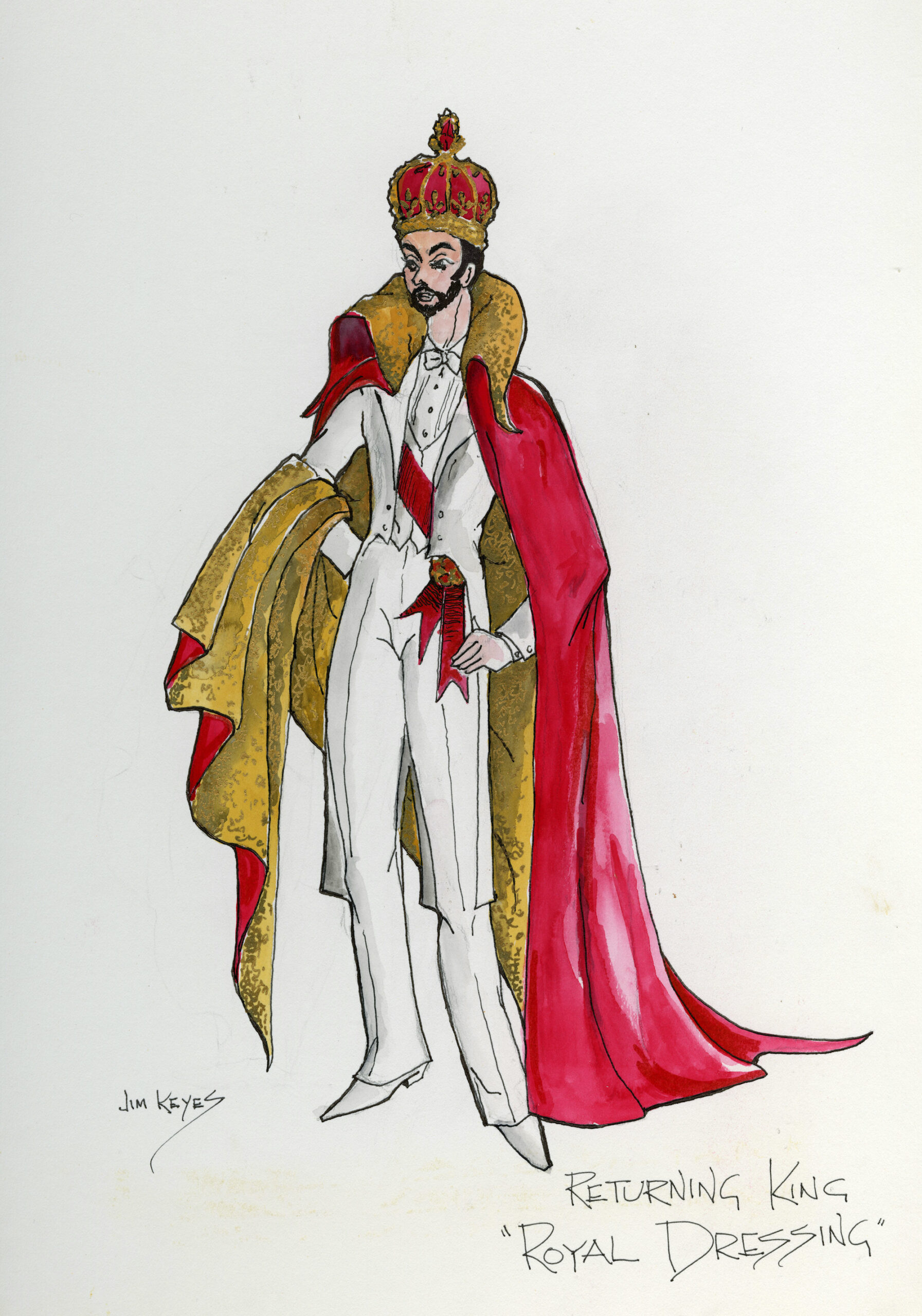 The 1980s hit the gay krewes hard because the AIDS crisis almost destroyed the gay carnival entirely, membership dwindled and people started to walk away from gay crews. However, while this was going on multiple gay crews were vying for the top spot.

The Petronius krewe website says that in the 1980’s the various gay krewes tried to “out-gay” each other. To the krewe of Petronius the flamboyancy was a way of life. The worst thing you could do at a gay krewe’s gala was show up in no costume. The minimum requirement was black tie with masque, however “clown costumes” were preferred, suggesting that the krewe wanted their attendees to dress as flamboyantly as possible and some members took it as far as flamboyant acts of defiance. The AIDS epidemic was devastating for the gay crews of New Orleans, they were the ones being effected by this epidemic and also were the ones being ostracized for their sexual preference and flamboyancy.

The renderings of the carnival krewe King by Jim Keyes shows the vibrant nature of the Krewe of Petronius. The flowing bright two-colored robes with an all white underdress highlights some of the flamboyant nature of the krewe. Additionally, the crown resting upon the king’s head is adorned with jewels and wrought in gold. Finally, the makeup upon the king’s face show how the krewe of Petronius wanted to display themselves. Most krewes try to shine some type of image of the krewe through their individual kings. The king of Petronius is the symbol of their krewe.  The wealth of Petronius is shown through their king’s crown, which is inlaid with many precious stones. However, the true message of Petronius comes through in their queen. To adhere to Mardi Gras tradition the krewe of Petronius had a queen, however this queen was a drag queen. Members of the krewe just want to have fun like all other genders and sexualities, and Mardi Gras is the perfect place to express themselves. 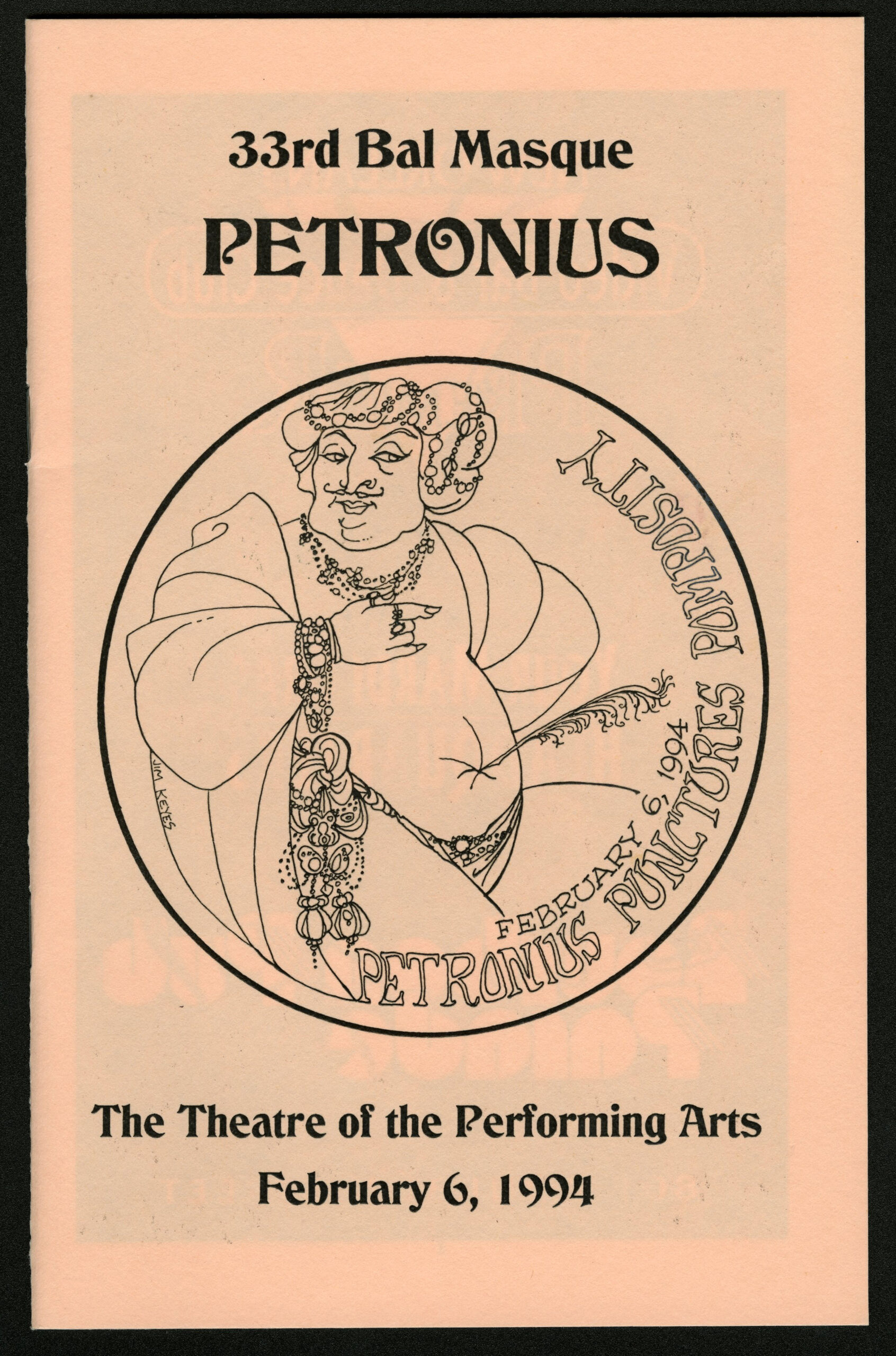 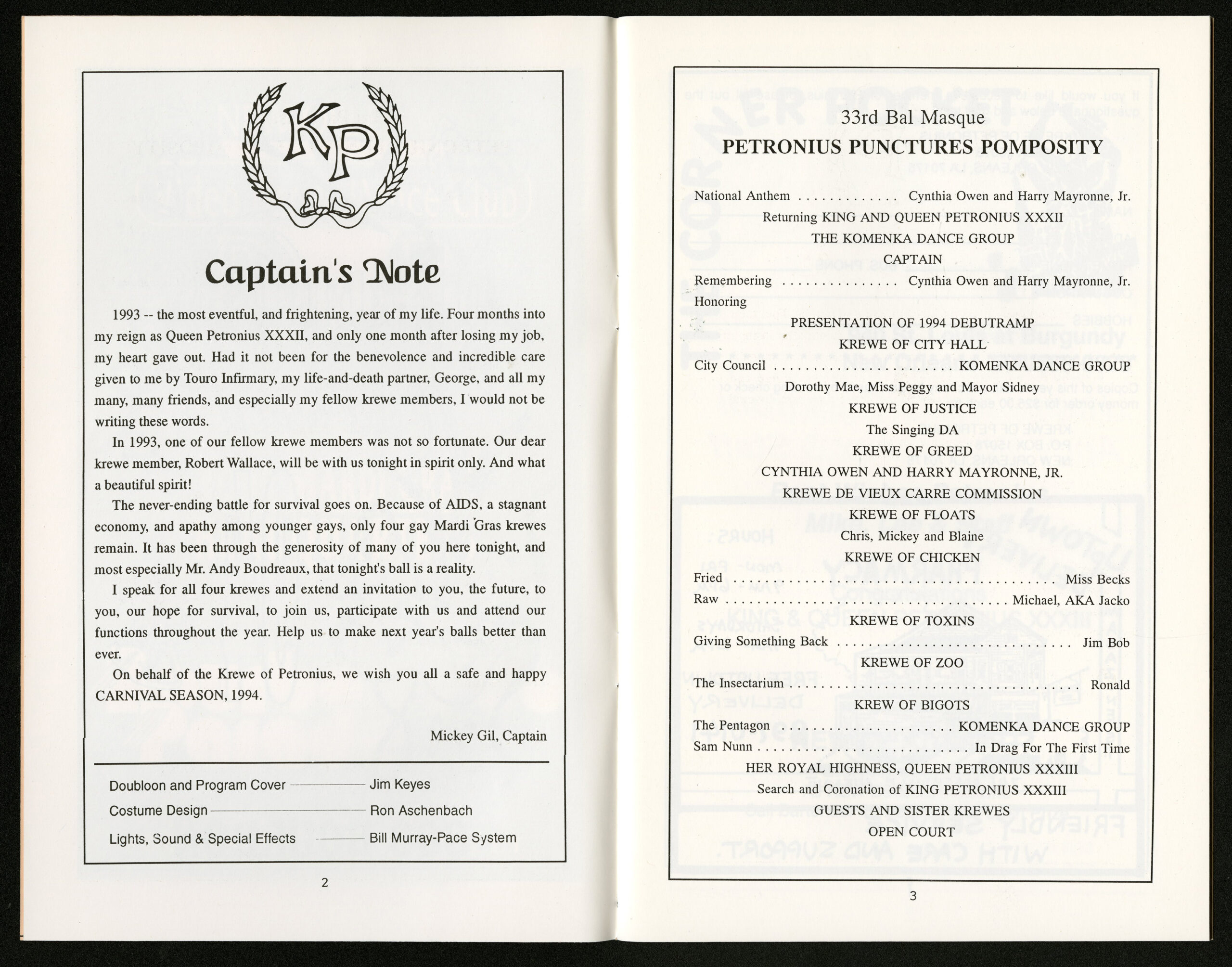 The cover of the 1994 pamphlet includes an image of a man in a mustache dressed in feathers, jewels, beads, and scarves. This demonstrates that even in a less progressive time period, the krewe exhibits more feminine qualities associated with homosexuality, and does not conform to societal norms. It emphasizes the importance of staying true to oneself and that one does not need to be like everyone else. In addition, by having this elaborate cover, the krewe makes it clear that they are extravagant in their events. The krewe gained popularity for having these differing qualities, making them feel they needed to uphold this reputation to an even bolder extent as the years progressed (Smith 35). On the following pages, there is a traditional captain’s note that Petronius’s captain, Mikey Gil, delivers every Mardi Gras season. He states that 1993 was “the most eventful, and frightening, year of my life.” He explains that along with losing his job and his reign, a devoted member, Robert Wallace, passed away from AIDS. He marks that the battle of fighting AIDS within the gay community must continue to protect their community, remain a strong participant of Mardi Gras, and lead the way for beneficial change in gay history. Gil ends the message by optimistically noting that regardless, the traditional balls will continue in future years with a more developed establishment than previous years. This highlights the struggles the Krewe faced, telling us that there are always going to be those challenges due to their homosexuality. Petronius is committed and united so that they can fight these struggles, progressing further towards positive change for the community.

Furthermore, the booklet includes advertisements from gay clubs, bars, and strip tease businesses, accompanied by images of shirtless men accessorized in beads and masks. The men are partying with each other in a promiscuous manner. The words “Congratulations Krewe of Petronius” are frequently included in a bold font. This presents a less filtered side of the krewe. It reveals that similar to other krewes, Petronius is very active in socially celebrating, except specifically for the gay community. These images and advertisements are not reserved for the time period, which further supports the common understanding that Mardi Gras is a time for people to be whoever and do whatever. They indicate that Petronius practices a spontaneous and liberated mindset so that people have the ability to be themselves. Petronius and the gay community were regularly rejected by society, but through their audacious statements, Petronius has obtained power and fame in the Mardi Gras world (Stein 331). Through this, people began to appreciate and associate the Krewe of Petronius for their eccentric celebrations.

All in all, this pamphlet for the krewe’s masquerade ball is tremendously telling of the beliefs that Petronius upholds. It also clearly distinguishes the progress in Mardi Gras history and in LGBTQ history that the krewe has achieved over the years. Nonetheless, although this object included aspects that were rare considering the societal conservative mindsets at the time, the gay community is now more accepted and normalized in our existing society, so the popularity and trend to join gay Carnival has declined (Calder 1). People who identify as gay no longer feel the need to join a gay krewe to find a sense of comfort and inclusion (Calder 1). Despite all the advancements the Krewe of Petronius has made, they still face a variety of impediments on an everyday basis. To overcome this, the Krewe of Petronius puts an immense amount of pride, devotion, and loyalty into their Mardi Gras celebrations. Petronius has been able to maintain their unconventional and embracive energy, causing themselves to remain a prominent krewe today. 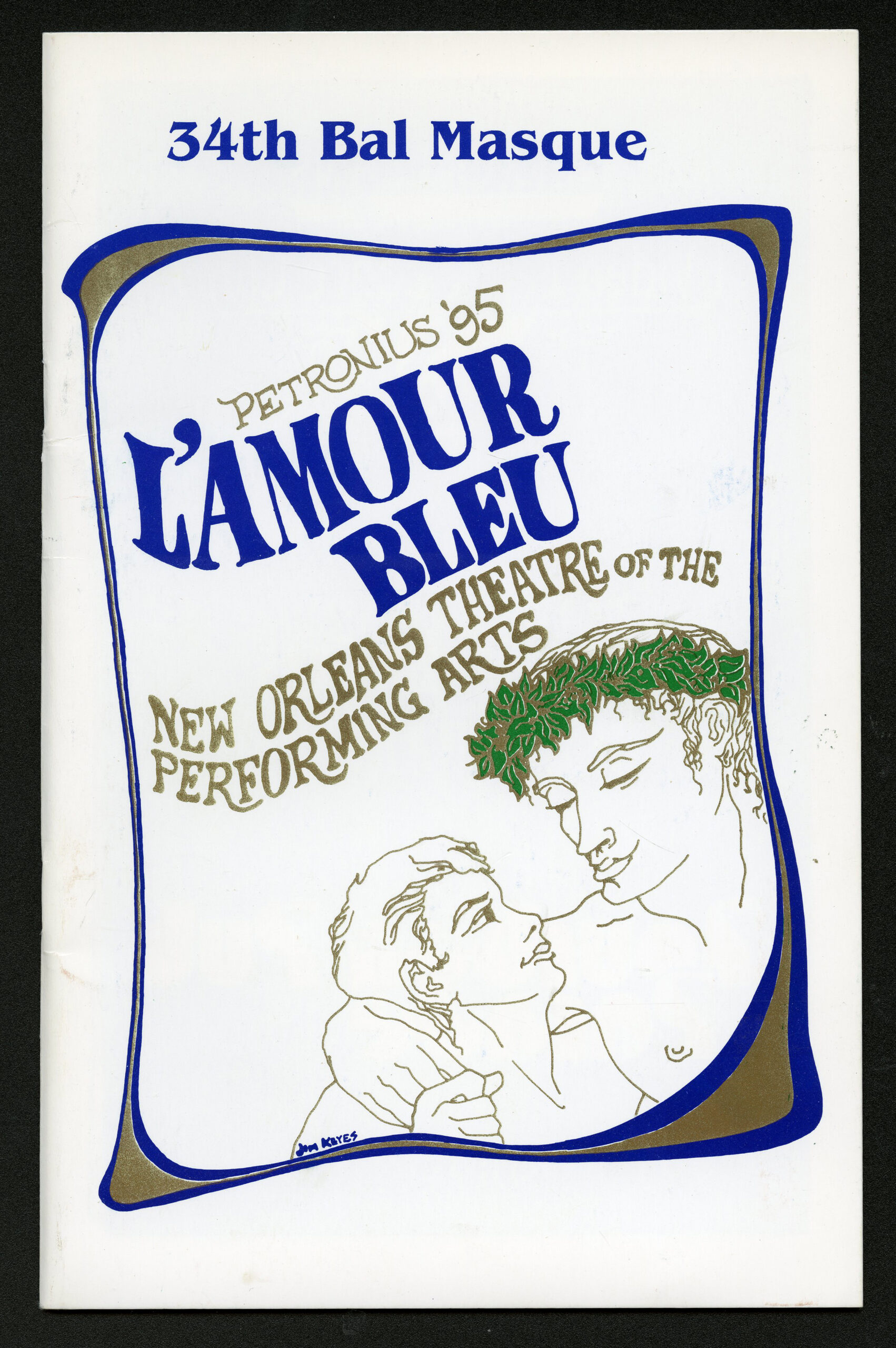 The 1995 pamphlet displays how far homosexuality has come since the krewe’s formation and how Petronius’s proud, flamboyant self will continue to prosper in the Mardi Gras environment that is abundant with “images and themes of eroticism, public nudity, public sex, and alcohol consumption” through phallic symbols in the invitation (Milhausen 97). Furthermore, provocative images within the pamphlet such as nude men posing and tavern deals that exemplify how “New Orleans is a place where people prioritize the need to be happy” (O’Neill 208).

The pamphlet is filled with elements that proudly represent Petronius’s dynamic culture in 1995. Throughout the nineties, an artist named Jim Keyes designed most of the cover pages of Petronius’s invitations. His creations all have deeper meaning to true Petronius supporters as they are elegantly suffused with symbols that only members would appreciate. For example, within the 37th pamphlet’s cover art, he personified oil and vinegar as lovers to promote the Petronius value that love transcends societal rules. In 1995 the ball was titled L’Amour Bleu and to match its fancy name Keyes’s design for the cover was exquisite as it depicts either Petronius himself with a younger man or possibly the characters derived from his novel Satyricon. The invitation also has Fleur-de-lis and other creole symbols scattered within that embody the Mardi Gras environment where “people play together and stay together, and that carnival mentality inspires that need to have fun or ‘let the good times roll’”(O’Neill 208). This mentality has propelled Petronius and all of New Orleans through times of turmoil such as Katrina and the AIDs epidemic.

As AIDs ravaged the gay community in the eighties, Petronius suffered as well; however, a man named Mickey Gil’s ingenious creativity and charisma reinvigorated Petronius because he did anything he could for the krewe. In 1987 Gil was named ball captain and he immediately recruited “Wendell Stipelcovich, a founder of the krewe of Armeinius, to join Petronius” (Smith 33). That year Stipelcovich designed a Flying Dutchman costume that won best costume at “the Academy of the Golden Goddess Inc. Awards, gay Carnival’s version of the oscars”(Smith 33). Throughout the nineties Gil’s leadership was the crux of Petronius and its success because he “was adept at finding the right people to realize his visions.”

Overtime Petronius and society have had to overcome and endure countless injustices and obstacles such as prejudiced laws against homosexuality and the traumatic AIDs crisis. Without the undying spirit of Petronius and leaders like Mickey Gil, the krewe would have been decimated. The imaginative design of the 1995 pamphlet embodies this spirit as it celebrates LGBTQ society and bolsters Petronius’s culture. 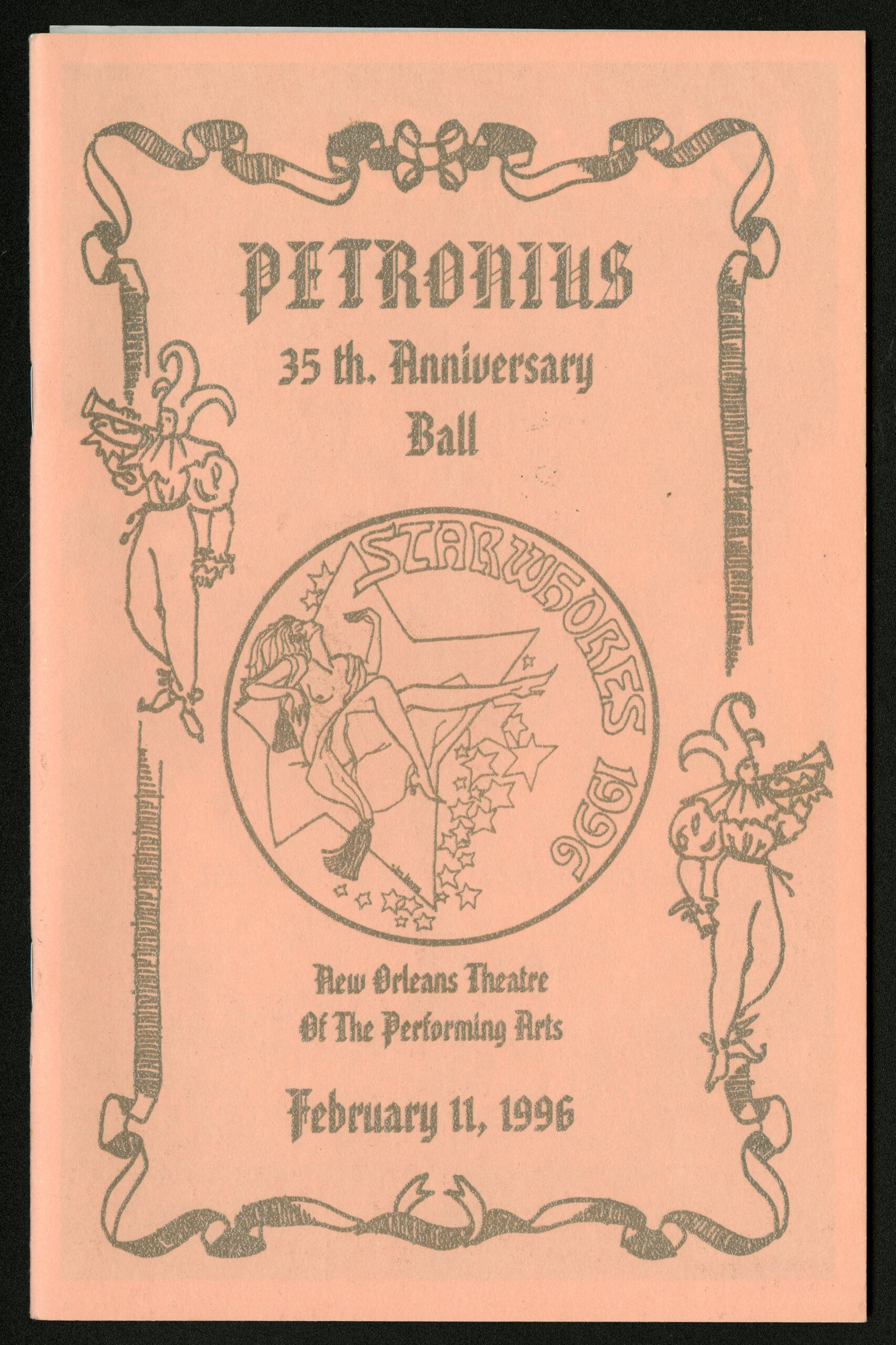 The object I have chosen to look at is the pahmphlet from 1996, which was the 35th anniversary ball. During my time in the archives I got to see many of these booklets from different years, and I found that a lot of the advertisements were the same each year. Some of the most common advertisements I saw were Petunias restaurant, Second Skins, and Clippers. These companies appear to be the most loyal to Krewe of Petronius. 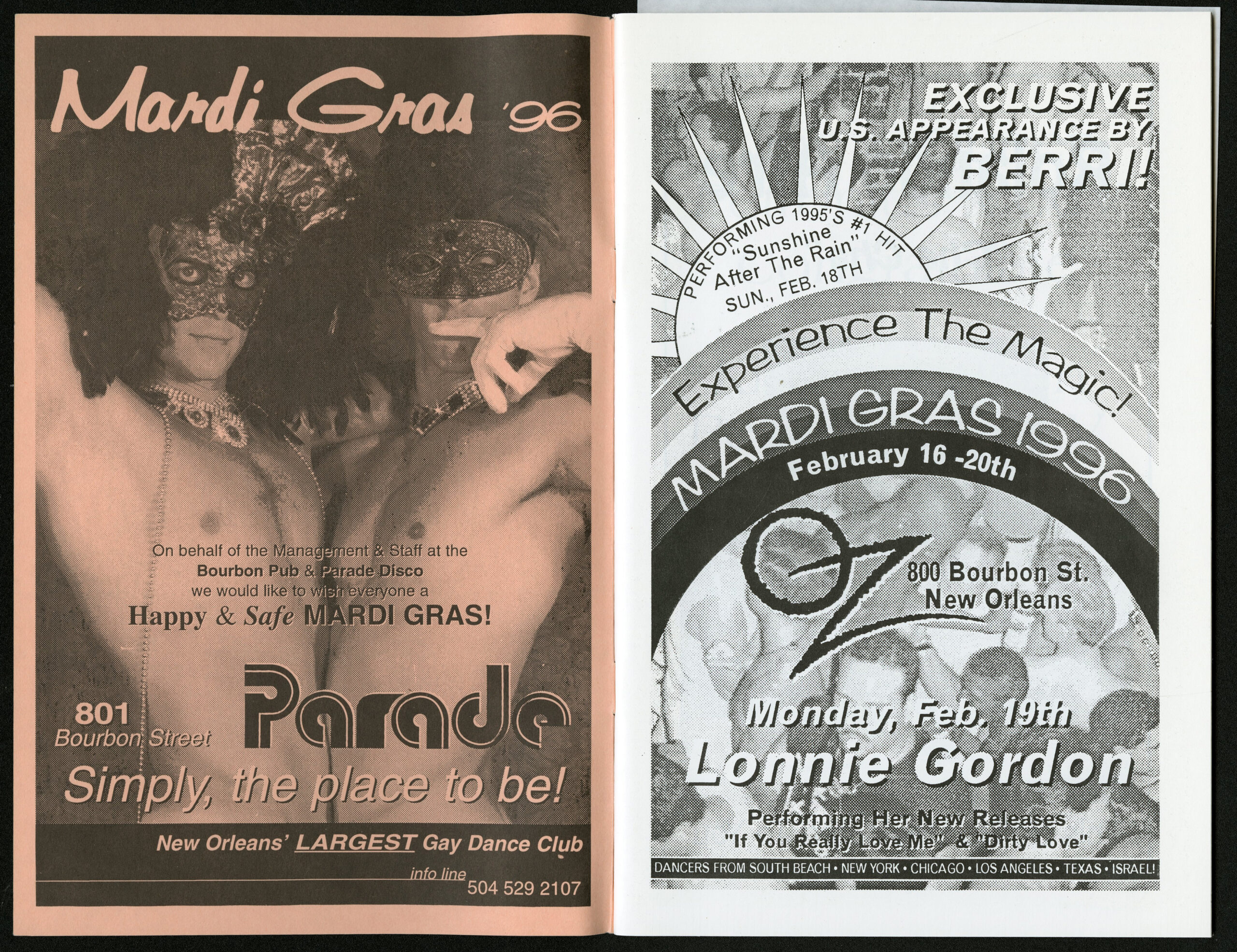 Many festival groups use things such as callouts to spread the word about their event and increase public participation. Callouts can be defined as “the texts queer festivals use to get public on social media” (“What” 83). Back when the 1996 booklet was produced, there was no social media, so the best way to spread the word about the Krewe of Petronius festival was through advertising. The Krewe of Petronius booklet is the equivalent of a social media post or text, and since being openly gay was not fully accepted in the 90s, television advertisements could not be used. Callouts “aim at producing a distinct image of festivals’ uniqueness in the social movements’ field” (“What” 83). The Krewe of Petronius does this by creating interesting ads that people will remember and associate with the krewe. One of the more interesting ads in the 1996 booklet was the one for Second Skins. The ad showed two shirtless men wearing masks. This would be considered risque for this time period, but because of its uniqueness, people definitely remembered it.

News, Billy., and Dent, Thomas C., Former Owner. The Blue Book : Guide to Pleasure for Visitors to the Gay City : Directory to the Red-Light District of New Orleans in the gay Nineties. 9th Ed.].. ed. Place of Publication Not Identified]: [publisher Not Identified], 1963. Print.