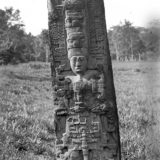 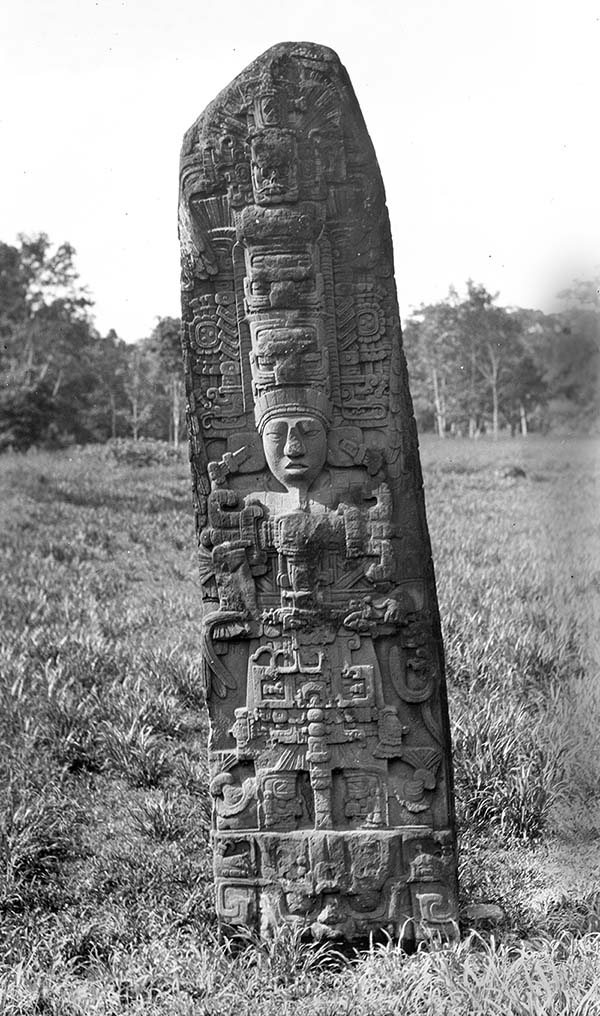 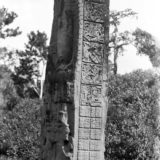 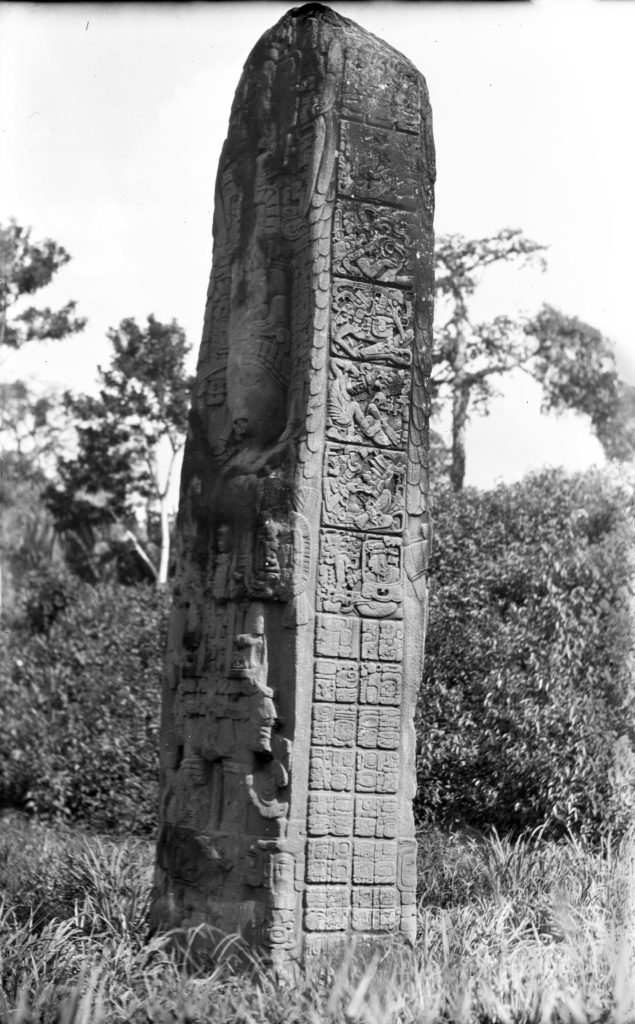 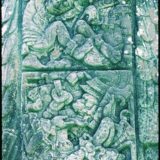 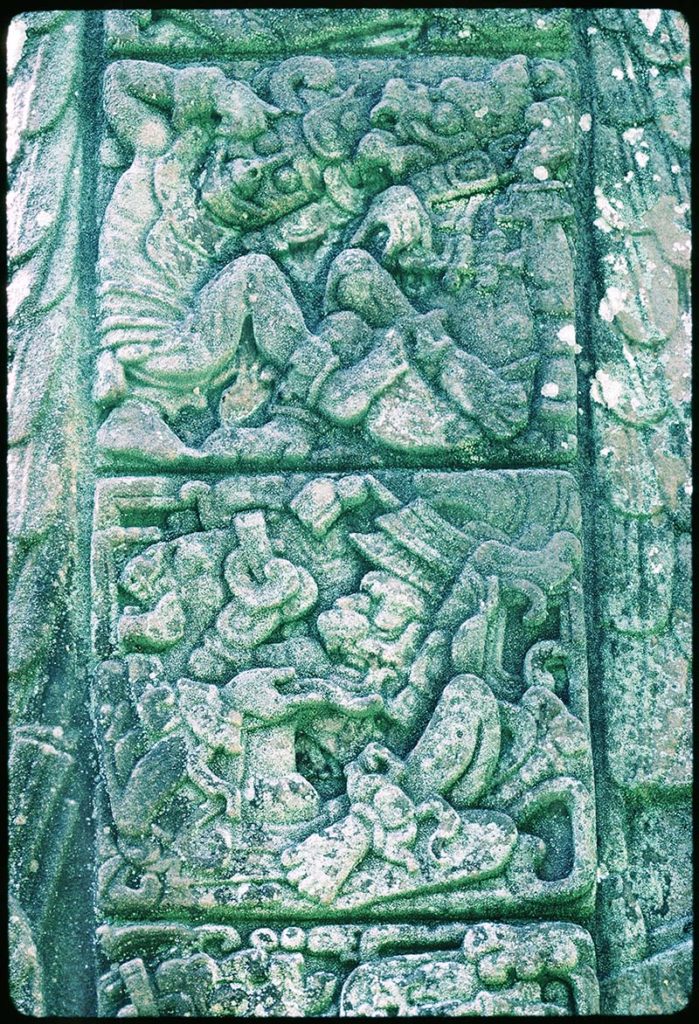 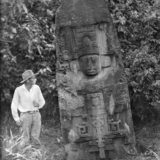 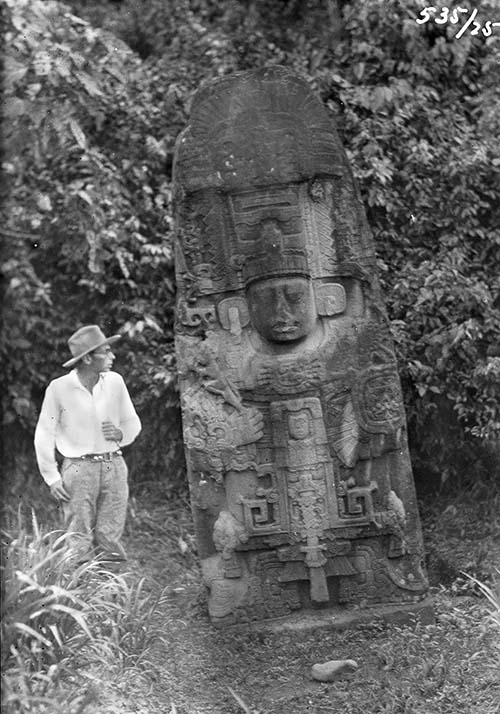 The stelae of Quirigua are famous both for their towering height and their highly artistic full-figure hieroglyphs. To get a sense of the truly impressive scale of these monuments, see the photo of Quirigua Stela E in the first section of the exhibit, Stories in Stone.

Stela D, standing approximately 20 feet tall, was erected in AD 766 in honor of K’ahk’ Tiliw Chan Yopaat (AD 725-785) and is one of 10 massive monuments commissioned by the king to celebrate his military victories.

The north side of the stela is a portrait of the king. He bears the insignia of the lightning god Yopaat, for whom he was named, and wields the lightning axe of the deity K’awiil while standing atop a ‘fire mountain’ or volcano.

The photo above, the one on the left below, and the one of Stela K were taken during the First Tulane Expedition to Mesoamerica in 1925. 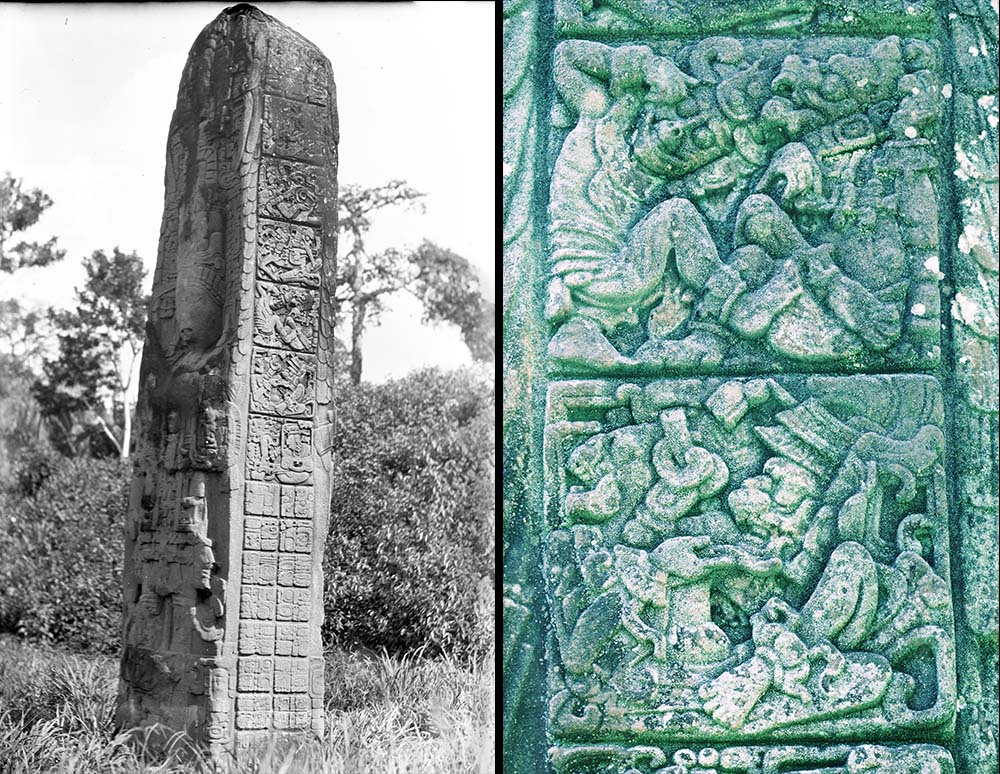 The text opens on the east side with seven spectacular full-figure glyphs recording the period ending date 9.16.15.0.0 7 Ahau 18 Pop, equivalent to February 19, AD 766. On this day, the king cast incense and dedicated the stela to an aspect of the lightning god Yopaat.

In the close-up image, the upper glyph shows the god of the number zero as part of the period ending date 9.16.15.0.0, meaning “zero days.” Though difficult to see in the picture due to erosion of the monument, the deity bears a percentage sign and a hand on his jaw, both symbolic of death. Full-figure glyphs are uncommon at most Maya sites, but are common features of the texts of Quirigua and Copan.

The relatively diminutive Stela K depicts a stunted portrait of K’ahk’ Jolow Chan Yopaat, the last known ruler of Quirigua, who reigned from about AD 800-810. He is best known for commissioning two of the largest buildings of Quirigua’s acropolis, including one which mentions the contemporary king of Copan, Yax Pasaj Chan Yopaat.