Napoleon Leading the Troops Over The Alps

Back & Forth: Reframing the Parameters of Black Subjection Through Appropriation / Napoleon Leading the Troops Over The Alps / 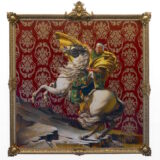 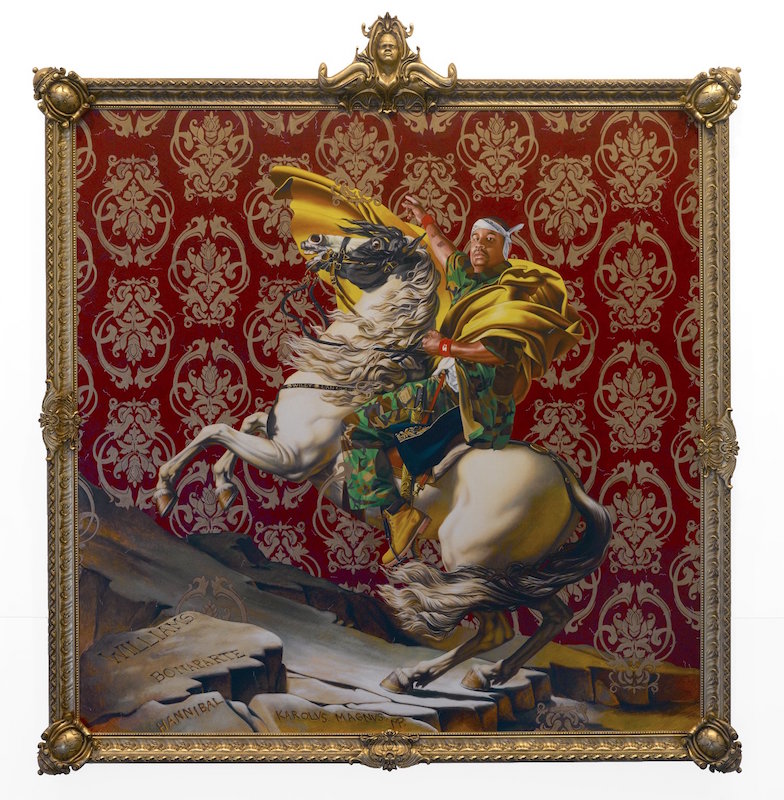 Kehinde Wiley, like Titus Kaphur, reimagines historical paintings in an attempt to rethink the power of portraiture. Wiley instead of crudely ripping or tearing out the white subjects simply replaces them with Black male sitters normally clad in street clothing synonymous with urban Black youth. Like Aaliyah, Wiley remix’s the original works by including the traditional elements of the original painting such as composition, color, and incorporates elements of hip-hop as a means of interrogating the tradition of portraiture and its exclusion of Black bodies.

Modeled after Jacques-Louis David’s Napoleon Crossing the Alps (1801-1805), which depicts the French emperor atop a white stallion who is in mid-rear. The Emperor maintaining his stoic composure as he sits atop his stead, gracefully pointing his finger directly ahead as a signal to both the stead and the viewer of the direction in which they’re moving. The steads unsteadiness is further accentuated by the rocky terrain in which the subject and horse are situated within further emphasizing the sturdy the French leader’s inability to be moved. Clad in outrageously fantastic garb that otherwise would be unsuitable for the task at hand the Emperor is pictured in a heroic manner. Like that of the Emperor of the French Empire, Wiley’s sitter, whose name is unknown, is also atop a white steed. He like the French emperor before points his finger in a similar direction and is also clad in dress that otherwise would be suitable for the task at hand, but instead of the tricorne hat that sat atop of the original sitter’s head, Wiley’s subject dons a white bandanna tied around his clearly bald head and knotted on the side. The pants and jacket of the new sitter are also military in style, this time though comprised of a much more modern camouflage motif that one would see on the bodies of hip-hop artist Master P and his group of No Limit Soldiers which immediately brings to reference P’s description of their uniforms and the creation of his “army” as a means of homage to his grandfather and as a symbolic gesture in his conquest on the music industry which Wiley seems to understand and uses this figure to symbolically “take over” the history of portraiture.