Back & Forth: Reframing the Parameters of Black Subjection Through Appropriation / Seeing Through Time / 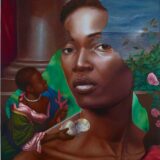 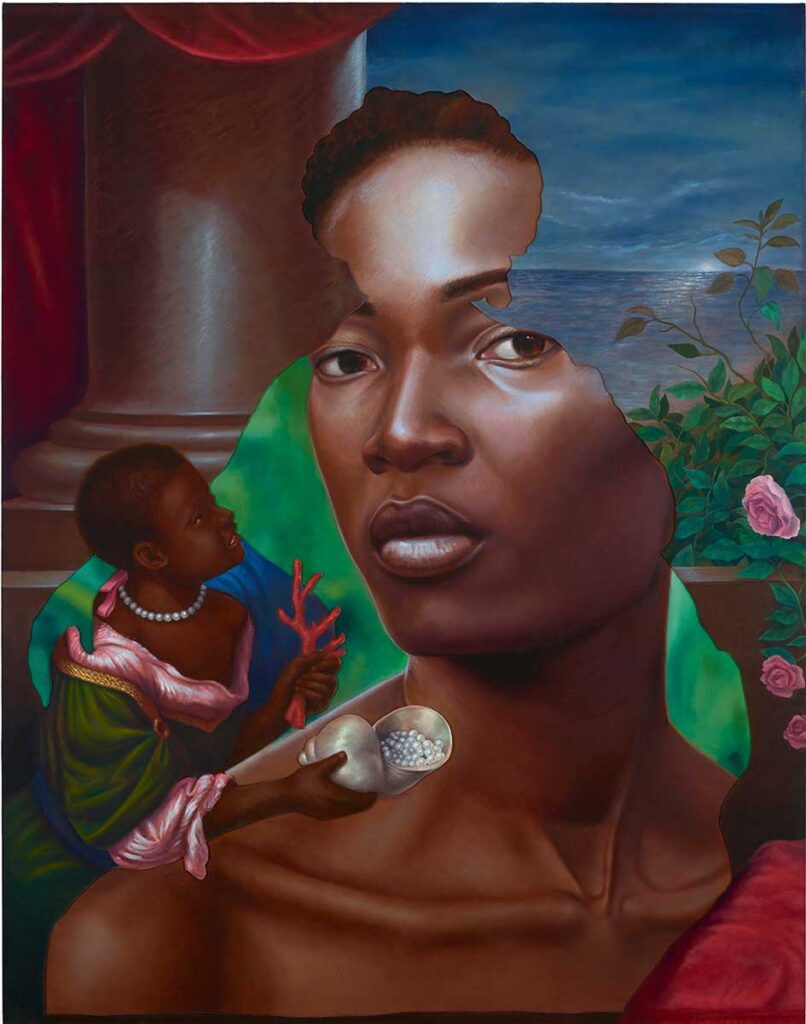 In looking for a visual to embody the relationship between past and present, I was led to the work of Titus Kaphur, who opens the exhibition. Kaphur, re-envisions portraits of the 18th and 19th centuries through the centering of Black figures in place of the prominent white sitters. Through his work he often, “reveals” the complicated histories of the original portraits through a visual breaking of the fourth wall, this includes but is not limited to cutting out the original figures and replacing them with Black bodies as we see above. His work then acts in reckoning with the fraught histories of the past through a tongue-in-cheek, self-awareness embodied through the use of this technique. His work also acts as a critique of the hierarchy of racial beauty standards, recentering Black figures in place of those historically denoted as “beautiful”

Titus Kaphur’s Seeing Through Time, 2019, is an oil painting on canvas, that is based on Pierre Mignard’s Louise Renee de Penancoet de Keroualle, Duchess of Portsmouth 1682. Mignard’s original painting sees the Duchess of Portsmouth seated in the center of the frame, richly decorated in luscious fabrics, as an open window displaying the vastness of the sky and sea during the setting of the sun, frame the right side of the figures face. Her alabaster skin, porcelain-like in appearance, is made even more apparent by the inclusion of her ungendered, darker-skinned attendant who sits at her side, staring up adoringly at their mistress. The servant, who also dons rich and lush clothing, serves the same purpose as the Duchess’ fine clothing and extraordinary setting, as an asset to exhibit the royal’s wealth and status. Kaphur, uses this same composition in his painting but instead opts to “cut” out or completely erase the sitting Duchess, instead, replacing her with a much larger Black feminine figure. The Black feminine figure that took the place of the Duchess is much larger in scale than the Duchess originally was and is rendered in a three-quartered profile. Her eyes like that of Duchess meets the gaze of the viewer, staring directly ahead and outside of the frame, situating herself as the subject and conveyor of power within and outside of the image. The Black servant in Mignard’s painting also finds themselves within Kaphur’s composition, this time though, staring in admiration at the Black woman who shares visual similarities to them. The sky that once framed the Duchess is also present, this time though, almost completely dark, marking the end of one day/period and the beginning of another. Here we see how Kaphur uses the tongue-in-cheek technique of revealing truths behind the original works and offering a reprieve from the legacy of anti-blackness that plagued the young Black sitter for centuries.