Back & Forth: Reframing the Parameters of Black Subjection Through Appropriation / The New Negro Escapist Social and Athletic Club (Emmett) / 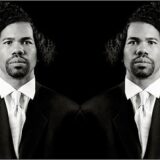 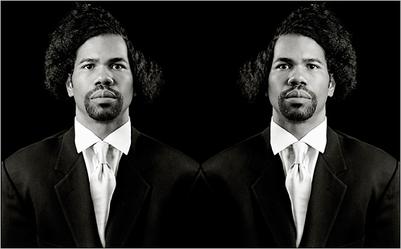 In early assessments of the potential power of photography, Frederick Douglas an abolitionist and a formerly enslaved person, believed photography to be a democratic technological advancement. Douglass has been quoted as saying “Man is the only picture-making animal in the world. He alone of all the inhabitants of earth has the capacity and passion for pictures.”  Being one the most photographed persons of the nineteenth century, Douglas understood that the photograph had the power to change narratives and invited the technology with open arms. The idea of self-fashioning, one in which I’ve mentioned as it relates to Renee Cox’s Olympia’s Boyz is one of importance in the theory of crafting a Black identity within the canon of art and like Douglass and Cox, Rashid Johnson also understands the importance of envisioning oneself. In his 2008 photographic piece The New Negro Escapist Social and Athletic Club, Johnson fashions himself after Douglass in an attempt to interrogate Douglass’ theories on photography by bookending Douglasses subjection with his own. Referring back to Shawn Michelle Smith, Johnson is literally “looking” back at Douglass as well as the complicated history of the medium which includes both the positive and negative ways in which photography has affected its Black sitters.

Johnson’s use of appropriation is different from the rest of those included in this exhibition as he is not directly replacing or removing a white figure from an image but instead appropriates the stylings of a prominent Black figure who had a sense of agency. His direct conversation with the physical and theoretical being of Frederick Douglass allows for the opportunity to critique understandings of race and subjection within the Black community and offers a chance for the viewer to contemplate the usefulness of lateral appropriation, or appropriation within cultures.