Mapping the Amazon River / Amazon Maps of the Modern Age /

Featured in these final two sections of the exhibit, are maps that exemplify the ever-increasing needs of modern Western society to obtain, record, and disseminate the most accurate data possible about the resources both natural and cultural, hidden and untapped within the Amazon Basin.  It is a story that has unfolded over the course of 500 or so years.  Below are three examples from the cartographic history of the Amazon that come from a world-atlas format.  With the earliest published examples of a world atlas, the Americas appear as an accepted part of the known “world” and modern, educated people are curious to know more about that “world.”  Bound atlases and geographies provided that sought after information.

World Atlases and the Amazon

The Theatrum Orbis Terrarum [Theater of the World] by Flemish geographer, Abraham Ortelius (1527-1598) is considered to be the first world atlas, in the modern sense.  Ortelius set the standard for world atlases that would continue well into the 17th century.  One the primary innovations of the Theatrum work is that it combines texts with maps.  It was the first project to curate, compile and reduce to size the best available maps of the time to a uniform format.  Ortelius also took the additional step to list the names of all of the cartographers and geographers whose works he used to create the first edition which appeared in 1570.  The Theatrum went through at least 37 editions in order to remain the current and up-to-date source for world geography.  It was translated into six languages along with its original in Latin with the last edition being published in 1641, long after Ortelius’ death in 1598.

The Amazon drainage appears prominently in the “America” map shown below.  The image comes from another first by Ortelius:  a pocket-size edition of the Theatrum. 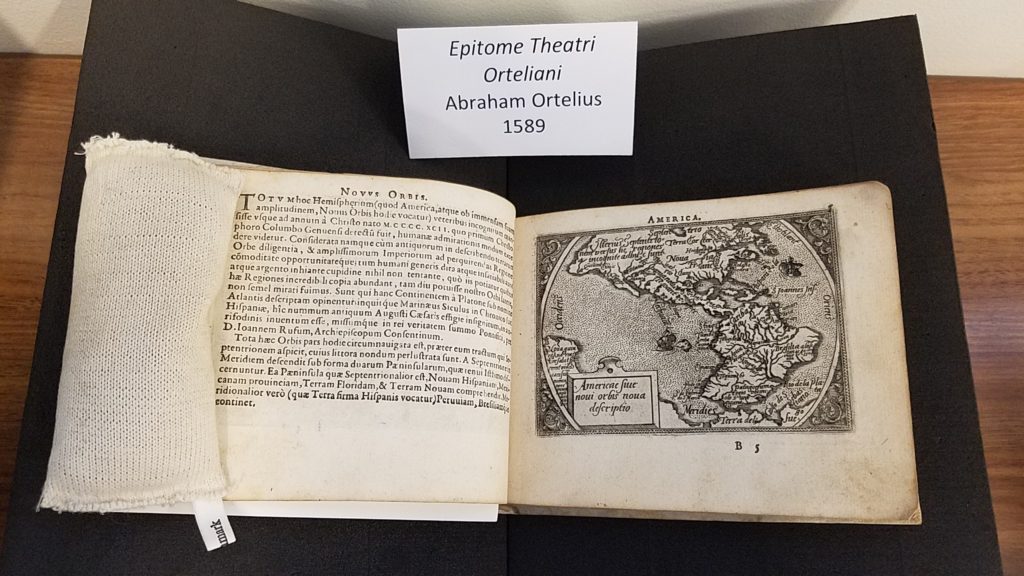 Abraham Ortelius’ map, “America,” showing the configuration and major drainages of the continents of the Americas in this rare pocket size publication of his Epitome Theatri Orteliani (1589), Howard-Tilton Rare Books Collection.

Another Amazonian map from a world atlas of note is that shown below titled, “A New and Accurate Map of Peru, And the Country of the Amazones Drawn From The Most Authentick French Maps &c And Regulated by Astronomical Observations,” by Emanuel Bowen (1694?-1767).  This map comes from Bowen’s Universal History of the World  first published in 1767 and co-authored with his son, Thomas.  Bowen was a Welsh engraver who worked in London during the early 1700s printing and selling maps.  He was renown for the detail and accuracy of his maps, especially road maps which were his specialty.  Another characteristic of Bowen’s cartography that can be appreciated in the map of Peru and the Amazon below is the inclusion of historical and geographic notes.  For example, at the top he mentions and maps the legendary Parima Lake and the town of Manoa de el Dorado “El Dorado” in the area of Guiana.  Lower to the south, is an annotation describing the country of the Xarayes is full of silver and gold. 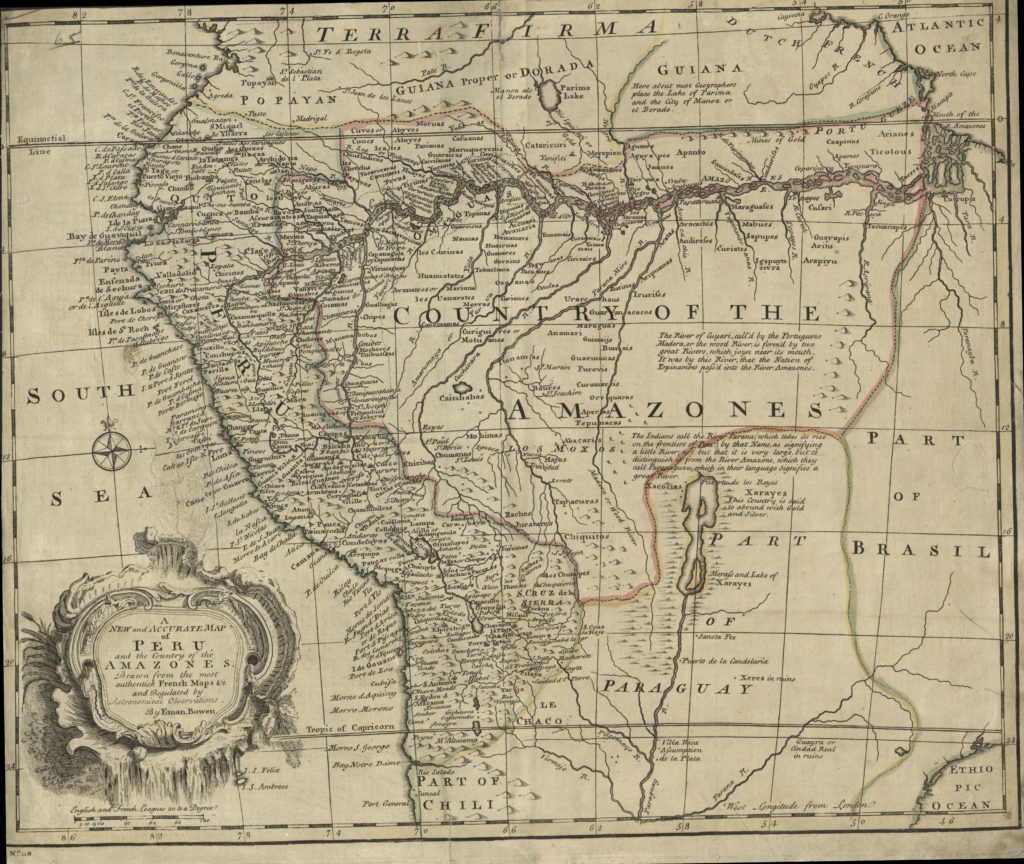 “A New and Accurate Map of Peru, And the Country of the Amazones Drawn From The Most Authentick French Maps &c And Regulated by Astronomical Observations” by Emanuel Bowen from the Universal History of the World published with his son, Thomas Bowen, c. 1750.  Map Collection, The Latin American Library.

The map, “Amérique Méridionale,” shown below, demonstrates another cartographic approach to the Amazon from the 19th century.  The mapmaker here is Victor Levasseur (1800 – 1870) who was an important French engineer, cartographer, and engraver of the mid 19th century.  He held a number of important political and educations posts in France in which he made good use of his cartographic skills.  His importance as a world cartographer outside of France has only recently been recognized and commented upon.  He is perhaps best known for his Atlas National Illustré des 86 Départements et des Possessions de La France, an oversize, highly decorative atlas of France which included his Planisphere and five important continental maps.  The colored version of “Amérique Méridionale” (below) comes from Levasseur’s Atlas Universale Illustre (1856) published in Paris by A. Combette.  Both of his atlases and constituent maps are distinctive for their wide decorative margins containing elaborate depictions of natural scenery, peoples, and trade goods related to the area that appears mapped in the conventional sense.  The “Amérique Méridionale” illustrates this very well with the allegorical maidens representing South America’s two major rivers at the top; the pictures of miners, gauchos, and the Amerindian toward the bottom; and the idealized landscapes of rainforest, the Andes Mountains, and coastal city.  Another singular feature of Levasseur’s maps was the inclusion of geographic and statistical data, and the “Amérique Méridionale” likewise contains a historicla note and population statistics in the lower left.  Levasseur’s atlases were some of the last examples of decorative cartographic works of the period. 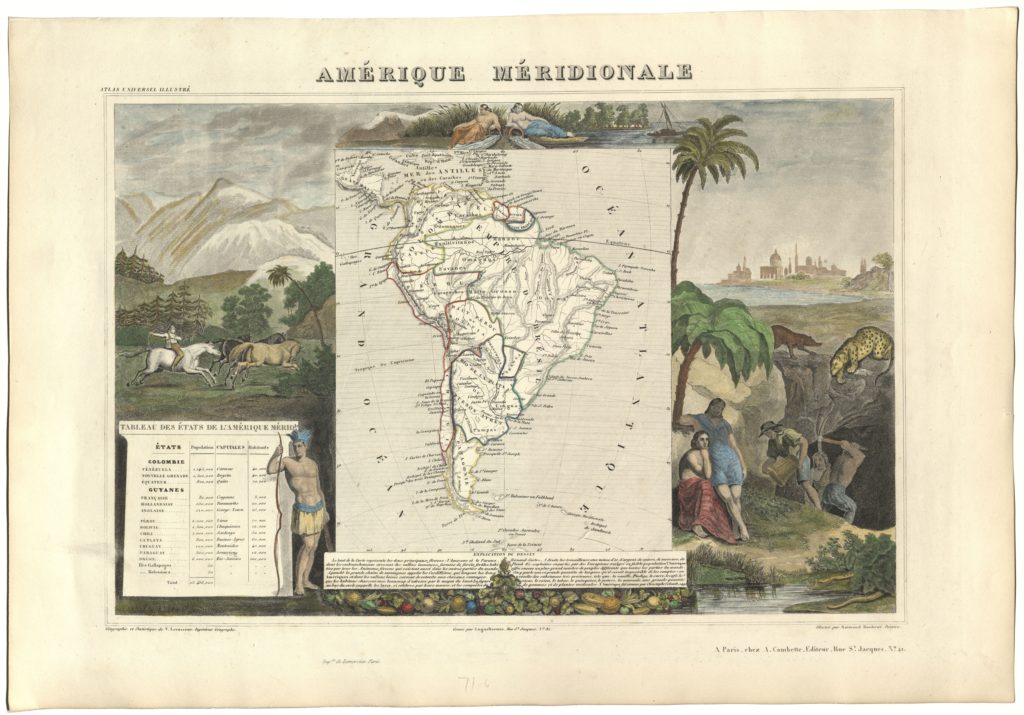 “Amerique Meridionale,” from the Atlas Universel Illustre, published by A. Combette. Geography and statistics by V. Levasseaur, history by Dessin, and engraving by R. Laguillermie, 1856. Map Collection, The Latin American Library. 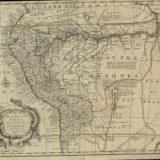 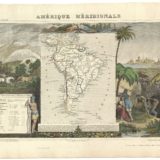