First Maps of the Amazon River

Scholars credit the Jesuit missionary, Father Samuel Fritz (1694-1724), with producing the earliest comprehensive map in manuscript form, dated 1691, of the entire course of the Amazon River in South America.  Fritz created his map based on a two-year, round-trip journey he made from his mission station among the Jurimaguas above Manaus to the settlement at Pará at the mouth of the river on the Atlantic coast.  While at Pará, Portuguese officials detained Father Fritz suspecting him of espionage on behalf of the Spanish.  After 22 months in confinement, the King of Portugal ordered Fritz to be released and so, once freed, he returned to his mission at San Joaquim above the Napo River.  He notes on his map:  “For better knowledge and general information concerning this great river Marañon or Amazons I have made this geographical map with no little toil and exertion, having navigated it in the greater part of its course as far as it is navigable.”  (144)

During the early 1700s, Father Fritz advanced to become Father Superior of the Jesuit missions he forged among the Omaguas and neighboring peoples.  Along with Father Juan Baptista Sanna, his second in command, Fritz struggled against Portuguese raiders, disease, and lack of manpower to keep the missions going.  During one of his prolonged stays at Quito, Father Juan de Narvaes published a highly embellished, engraved version of Fritz’s original Amazon River map in 1707  (Quito map in World Digital Library) with the intention of presenting it to Philip V on behalf of the Jesuit College of the Province of Quito.  The map was extremely accurate given it was based on personal observation and information from native informants.  Fritz’s map, along with his notes on Amazonian topography, flora, and fauna, continued to be the only trustworthy source for cartographers about the Amazon River years after his death in 1724.

Even though Father Fritz had sent manuscript versions of his 1691 map to his superiors in Madrid, Spain and to ecclesiastical authorities in Quito, Ecuador the map and the information it contained was not widely known in Europe until after it appears again in a publication by Charles-Marie de La Condamine titled, Relation abregee d’un voyage fait dans l’interieur de l’Amerique meridionale (1745).  Condamine formed part of a French expedition to the South American continent to make astronomical observations and measure a degree of meridian along the Earth’s equator with the goal of improving measurements of the Earth and the accuracy of maps.  Condamine seperated from his expedition companions to return via the Amazon River.  He visited the Jesuit missions and it is likely during one of these visits that Condamine acquired Fritz’s map or a copy thereof.  Condamine published his own map of the Amazon along with his own observations.  His map appears below and it shows Fritz’s trace of the Amazon’s course in comparison to his own.

Herman Moll (1654-1732), was a prolific and well-respected engraver, cartographer, and geographer who worked diligently and prolifically in the London map trade.  He reproduced Fritz’s map for use in his own publication projects.  The image below comes from his, Atlas geographus: or, A compleat system of geography, ancient and modern. Containing what is of most use in Bleau, Varenius, … &c. With the discoveries and improvements of the best modern authors to this time, published in 1711-1712. 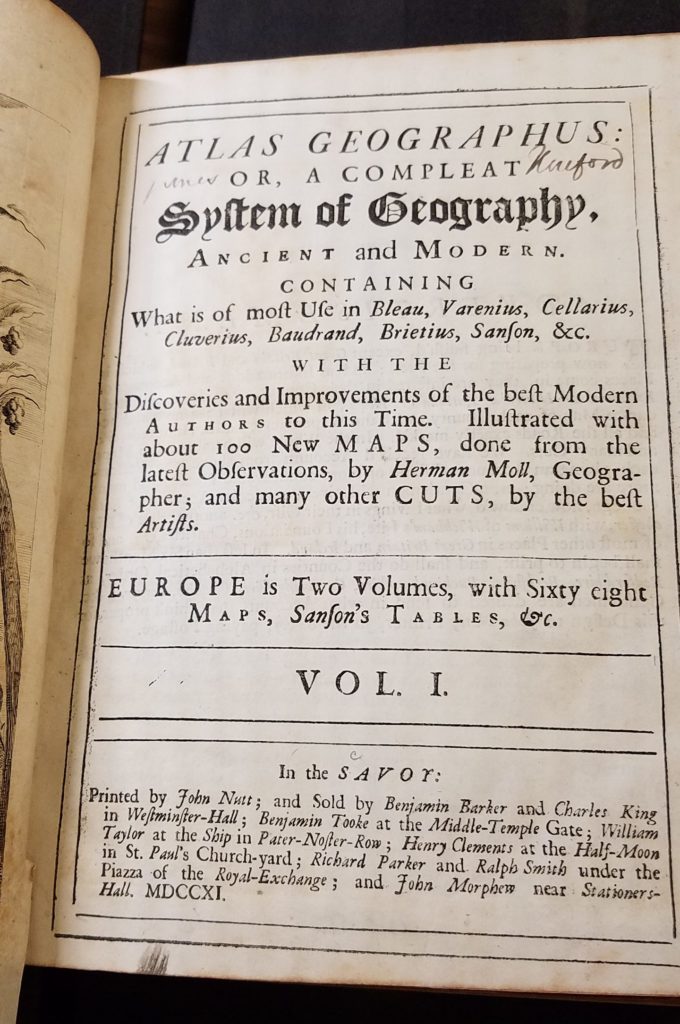 The Great River Marañon or of the Amazons Geographically Describ’d by Samuel Fritz Missioner on the Said River, by Herman Moll. Map Collection, The Latin American Library.

Moll’s reproduction of Fritz’s map appears in other publications, including Abbot Querbeuf’s, New Edition of the Lettres Edifiantes Et Curieuses, Ecrites Des Missions Etrangeres.  The Fritz map by Moll appears in the second edition of Lettres Edifiantes Et Curieuses, Ecrites Des Missions Etrangeres, vol. 8 (1780-1783).  This monumental series began under the editorship of Charles le Gobien, who, when charged by the Jesuit superiors with providing a history of Jesuit missions and news from China, adopted an epistolary format.  Published annually, then biennially, then more irregularly, each volume comprised recent missionary missives, in no particular temporal or geographical order, addressed to those inside and outside the Society.  The volume essays addressed Christianity’s progress around the world, as well as ‘curious’ matters of medicine, science, natural history, technology, geography and cartography, giving the Lettres its broad appeal.  Le Gobien was succeeded by Jean-Baptiste du Halde, a great proponent of Jesuit science as a means to winning imperial favor in China, who in turn was succeeded, after a six year gap when disruptions in overseas trade prevented letters getting through to France, by Louis Patouillet.  The publication of volume XXVIII in 1758 was followed by the tumultuous years that witnessed the Society’s suppression in Portugal, France, Spain and Italy, and yet the Lettres re-emerged under the editorship of Nicolas Maréchal in 1773 (the same year that the Jesuit order was universally dissolved by papal brief), advancing to a 34th and final volume in 1776.  The second edition, enlarged and corrected by l’Abbé de Querbeuf, is preferred to the original, as it is arranged systematically according to geographic region. 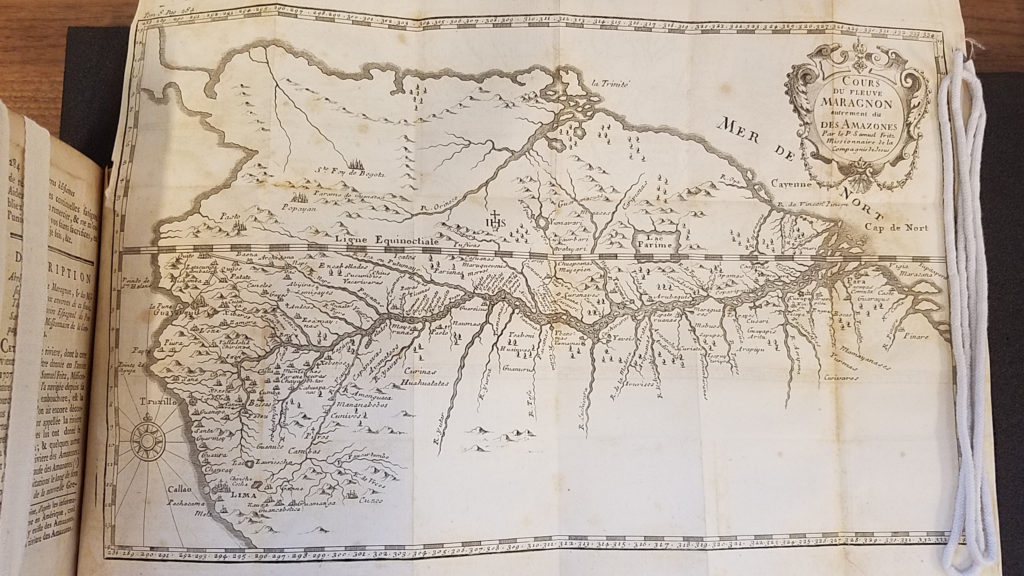 The authors of the above mentioned works published versions of Samuel Fritz’s map of the Amazon River for its cartographic content (as in the case of Moll’s atlas) or to illustrate chronicles of Amazonian exploration and river charting (in the case of Condamine and l’Abbé de Querbeuf).  The final image below represents a very interesting example of how Fritz’s map came to be used to illustrate a passage of a longer story that happened to take place in Amazonia in a way that suggests it had some degree of iconic value for readers of the time.

The image below comes from a two-volume set that is a re-issue of the first edition (1745) of previously unpublished manuscripts collected by the Earl of Oxford, A collection of voyages and travels, consisting of authentic writers in our own tongue, which have not before been collected in English, or have only been abridged in other collections. And continued with others of note, that have published histories, voyages, travels, journals or discoveries in other nations and languages, relating to any part of the continent of Asia, Africa, America, Europe, of the islands thereof, from the earliest account to the present time …, published by Thomas Osborne in 1747. They contain 37 of Herman Moll’s maps.

The Fritz map illustrates the fascinating account of William Davis titled, “Travels and miserable Captivity of William Davis, Barber-Surgeon of London,” (1747:476-488).  Davis recounts his many adventures with rich descriptions of the places, peoples, and cultures that he encounters throughout.  He begins with his time working on an English merchant vessel bound for north Africa, his captivity as a galley slave on a ship owned by the Duke of Florence, and his eventual release and conscription as ship-surgeon on a British vessel bound for Brazil. It is at this point in his chronicle that the Fritz map appears as the one and only illustration for Davis’ description of the Amazon River.  He travels on to several other port cities and finishes with a list of people who could testify to the truth of his tale. 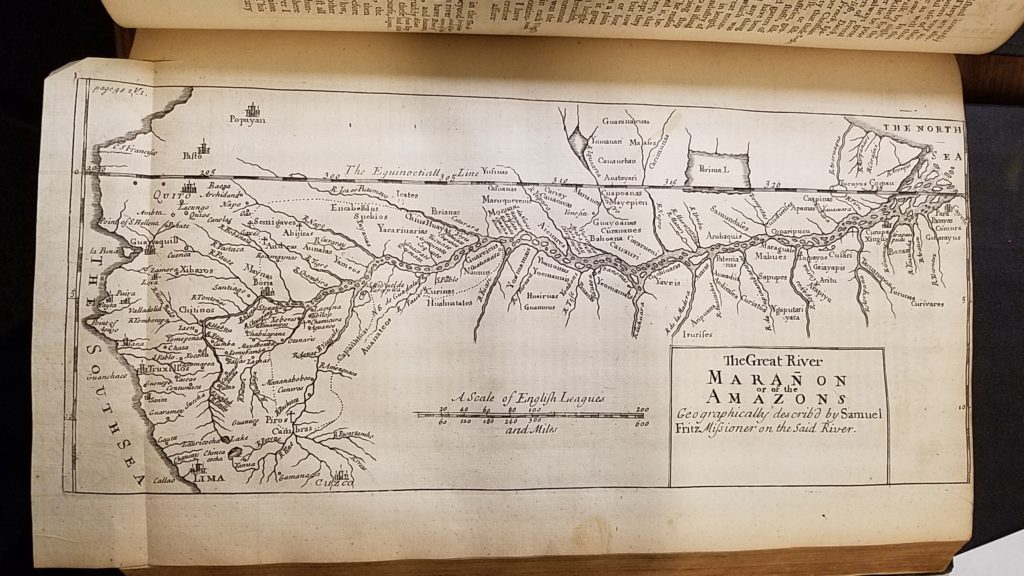 Herman Moll’s version of Samuel Fritz’ map of the Amazon River for use in the chronicle of William Davies’ travel narrative in the “Oxford Voyages” (1747). 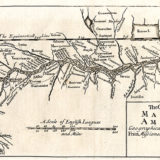