Early Tracings are some of the earliest European maps of the Amazon river basin within the larger contexts of the South American continent and the territory referred to as Brazil.  In these early maps, the river is called Marañon.  One of the earliest appearances in print of the Amazon River as a major continental drainage are those produced by Venetian editor, Girolamo Ruscelli (c. 1504-1566), for his translated editions of Ptolemy’s Geographia.

Claudius Ptolemy (90-168 CE) was a Roman geographer and mathematician who lived in Alexandria, Egypt, and it was there where he compiled his knowledge and theories about the world’s geography into one seminal work. Although his maps did not survive the ages, his mathematical projections and location coordinates did.  During the Renaissance revival of Greek and Roman works in Europe, “Geographia” was rediscovered by monks and based upon Ptolemy’s detailed instructions, the maps were recreated.  The first printed edition with maps was published in Bologna in 1477.

A groundbreaking version of Ptolemy’s “Geographia” was later published in 1548 with the short title, Ptolemeo.  La geografia di Claudio Ptolemeo alessandrino,….  It was the first to contain copper engraved maps by the foremost Italian cartographer of the 16th century, Giacomo Gastaldi.  This was also the first atlas to appear in pocket form and in Italian, translated by Pietro Andrea Mattioli.  Another aspect of this work that made it exceedingly important was the supplement of 34 “modern” maps to Ptolemy’s original 26 maps of Europe, Africa, and Asia.  These “modern” maps included for the first time the known regions of the Americas.

Ruscelli would re-issue his own version of this 1548 atlas beginning in 1561.  V. Valgrisi published the 1561 and 1562 editions of the Geografia di Clavdio Tolomeo Alessandrino.  They appeared in an enlarged format and with Ruscelli’s own maps based on Gastaldi’s originals.  The Italian Geografia would be re-issued five more times by various publishers. 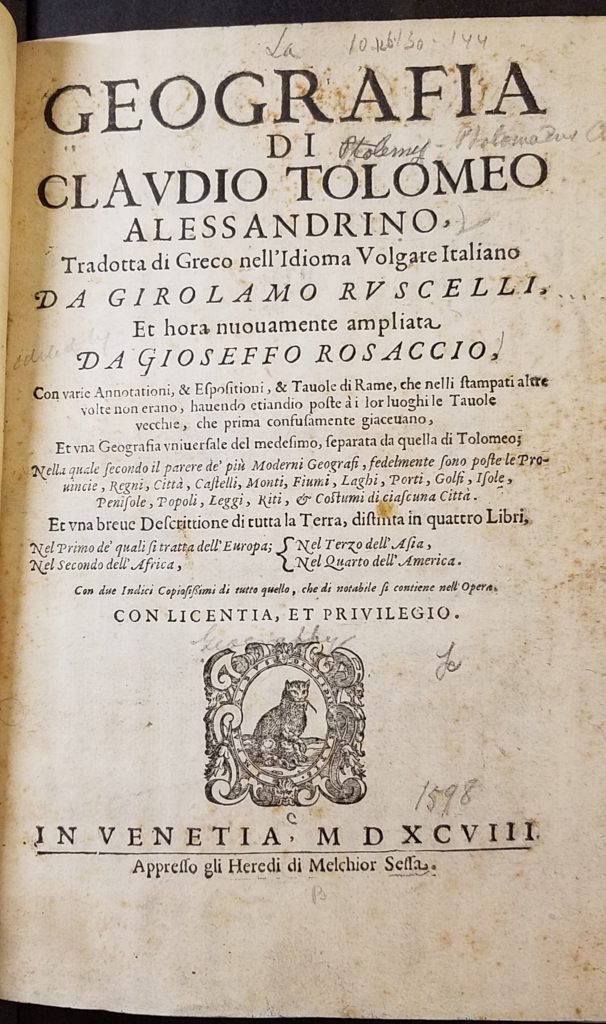 The map of South America in this fourth edition, shown below, illustrates the use of Ptolemaic grid measurement, tropic lines and the Equator.  It also employs pictorial relief and fanciful illustrations of ships and sea monsters.  Note that the map has little in the way of accurate detail for the interior of the continent, namely the delineation of the Amazon river’s course. 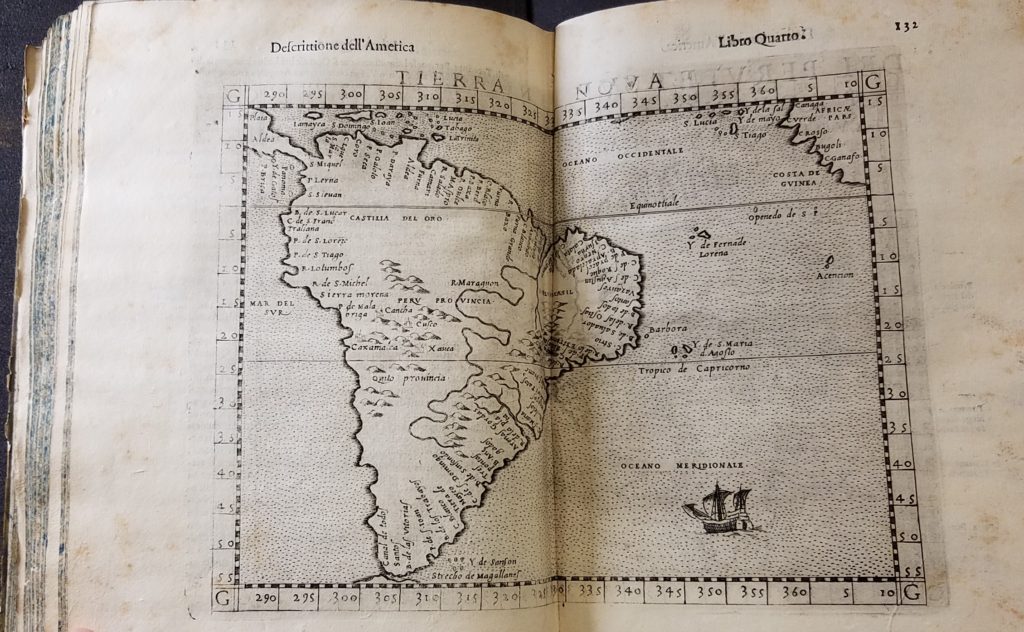 The course of the Amazon river is also depicted in Ruscelli’s map of Brazil, “Brasil Nuova Tavola,” as it was known in the mid-16th century.  The hand-tinted version, below, comes from a 1561 edition of the atlas.  The orientation of the map is head on to the Atlantic coastline coming from the East.  The Amazon River is foreshortened as its course is traced horizontally across the top of the map to the base of what appears to be a volcano.  The Río de la Plata River is drawn from the opposite side of this volcano to the coastline at the far left (or southern end) of Brazil.

The inscription in the center of the map reads, “Gli indi natij di questi paesi mangiano carne humana,” which translates roughly to, “the indians native to these countries eat human flesh.” 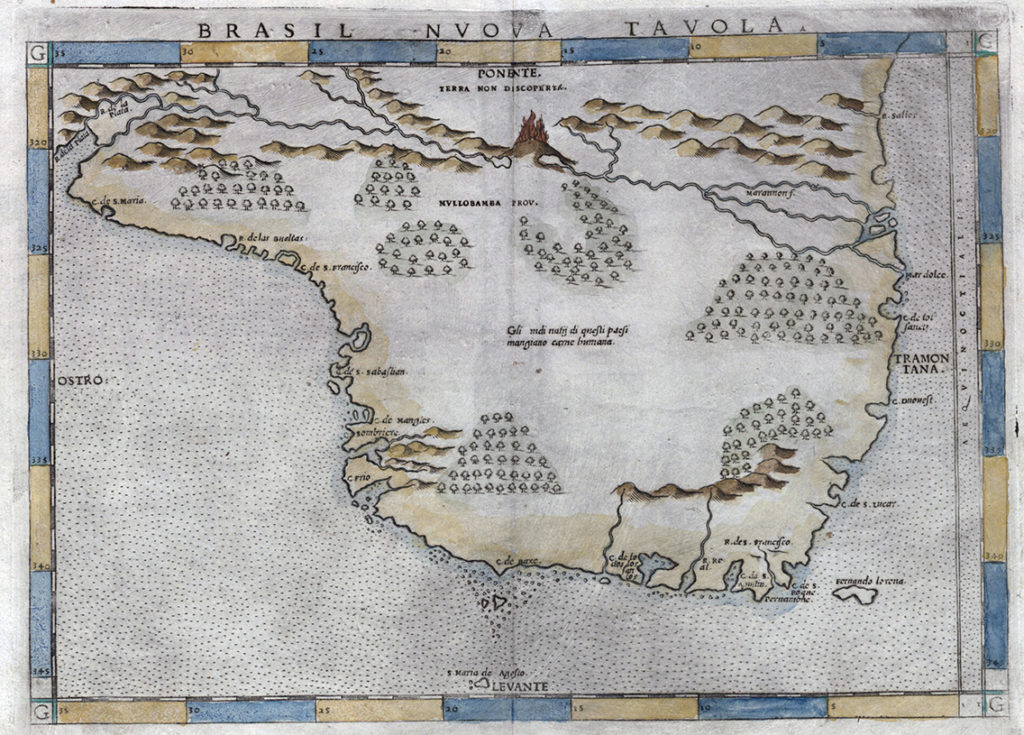 Versions of this same Brasil Nuova Tavola map in later editions of Ruscelli’s Geografia would embellish the inscription with an explicit illustration of imagined cannibalism practiced by native Amazonians. 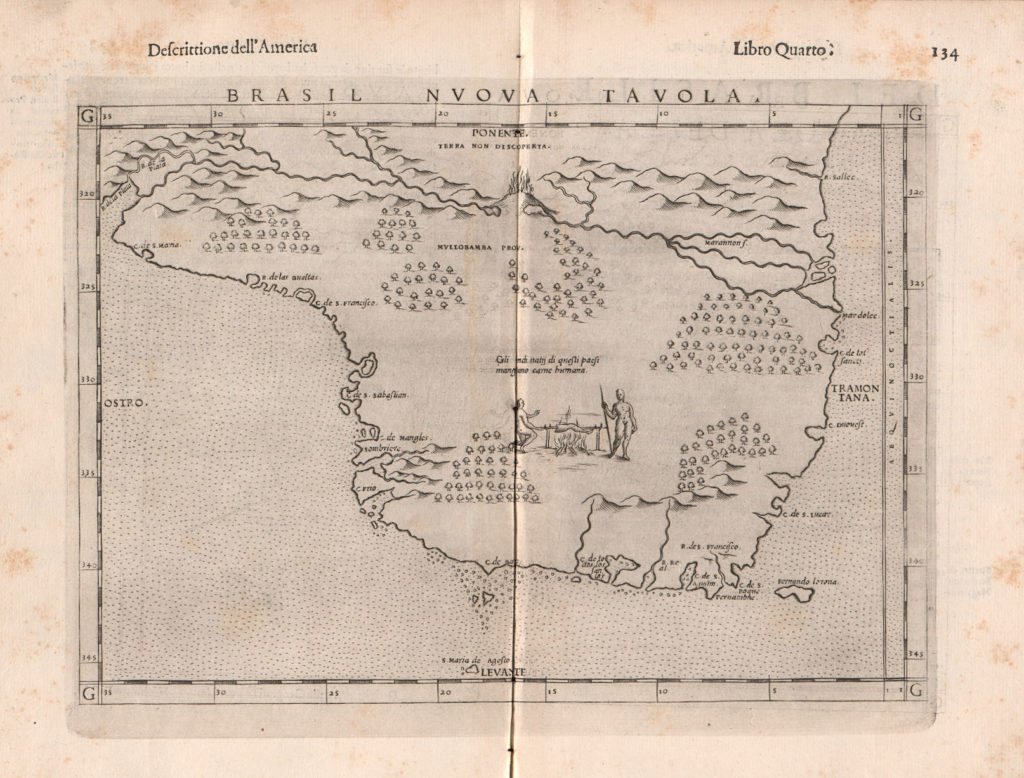 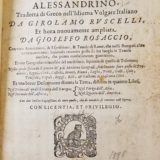