Mapping the Renaissance: Worldmaking in Europe from the 13th to 16th Century / Sebastian Münster’s Cosmographia / 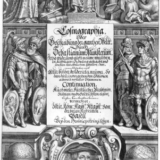 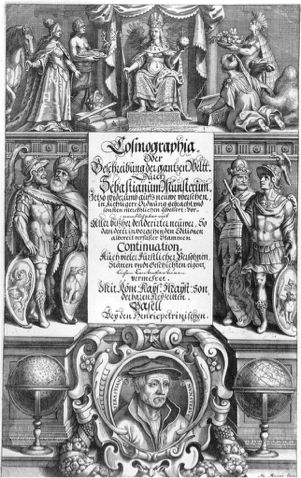 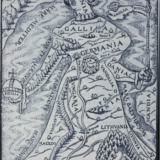 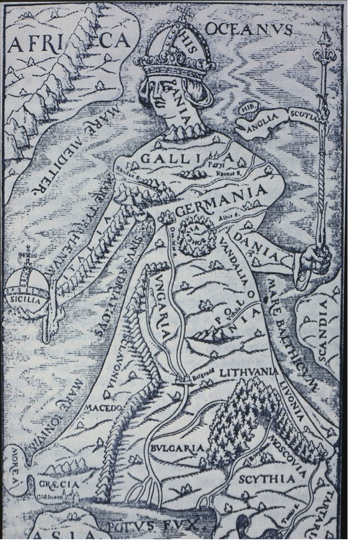 Sebastian Münster (1488-1552), a highly-skilled cartographer and cosmographer, created the first German-language description of the world in his book the Cosmographia in 1544. The Cosmographia provided readers with insight into the ‘modern world’ through numerous, elaborate maps of the world accompanied by detailed descriptions of what natural elements, culture, people, and way of life characterized these lands. This innovative atlas proved one of the most popular and widely read books of the 16th century. Therefore, many editions were created to be contemporary with the latest geographical discoveries. the Cosmographia was also published in several languages to be read by many across Europe.

The frontispiece of the 1628 edition of the Cosmographia, visually depicts figures symbolizing Europe, Africa, Asia, and The New World, paying their respects to a figure who embodies power and knowledge, the Holy Roman Empire. When comparing the frontispieces from a 1598 and 1600 editions to this one, you can see the transition from simply pictorial imagery to the inclusion of specific allegorical imagery. The introduction of allegorical artwork to depict continents shows the increased interest in shaping continental identity both geographically and culturally during the peak of the “Age of Exploration” and increased global connection. The 1628 Frontispiece explicitly the desire to mold the unified European identity and its relation to and power in the global world.

In 1588, the publishers of a new German edition added a map of Europe in the shape of a queen to the section of Münster’s text that describes Europe. Oriented with west at the top of the map, this queen’s body, dress, and adornments take on the general shape of the European continent. Sicily, represented as a royal orb, sits in the hand attached to the arm of Italy. The crown of Spain rests atop Europe’s head as she looks toward the continent of Africa. Rivers, hills, and slightly abstracted forests and mountain ranges decorate her dress, which takes on more geographically accurate coastlines as Europe transitions into Eastern Europe and Russia.

Although this map seems unique to a modern viewer, this motif proliferated throughout Europe in the 16th century. This representation is considered an anthropomorphic map, or a map that takes a human shape. While many different kinds of anthropomorphic maps existed at the time, the depiction of Europe as a queen was very popular. Tryolean Johannes Putsch created the first known map using this motif and composition in 1535 for the Holy Roman Emperor and his son. The inclusion of this map and the new frontispiece parallel an increased need in the 16th century to depict a unified Europe: specifically unified against the threat of Islam and the new lands Europeans were discovering and colonizing. Both this personified map and the continental allegories on the frontispiece demonstrate a hierarchy in which Europe, with her crown and regalia, reigns over the other continents.

This book can be found in Tulane University Special Collections Rare Book collection.