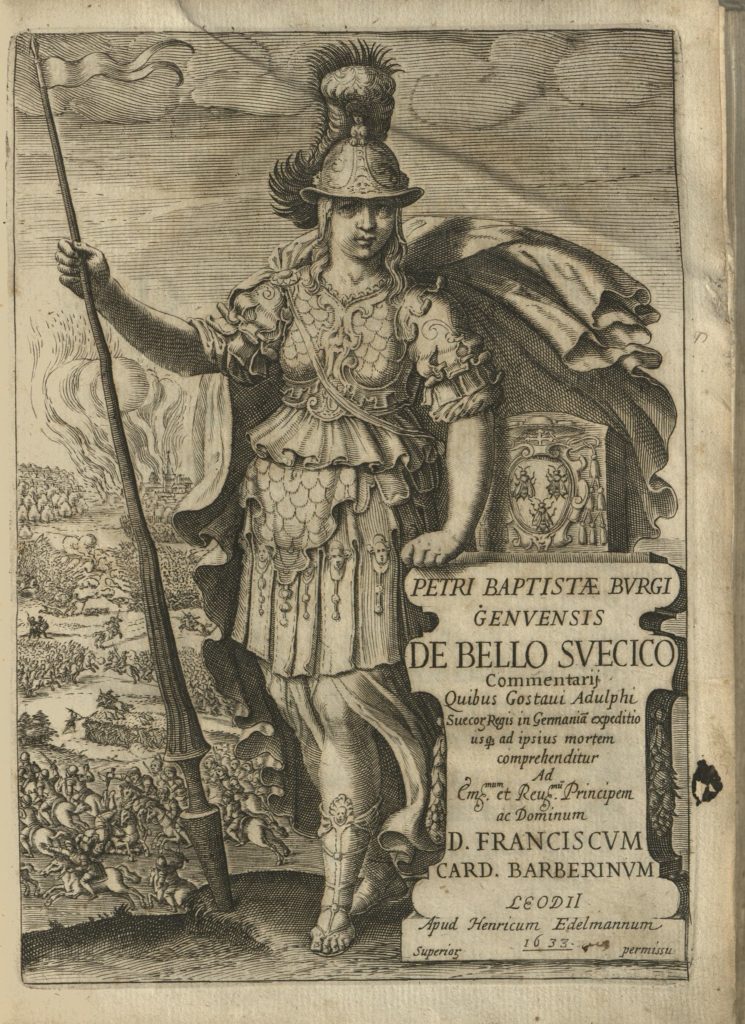 The religious divides engendered by the Reformation soon erupted into violent conflict on the continent, ultimately leading to one of the bloodiest and most destructive wars in European history: the Thirty Years’ War (1618-1648). The conflict began with rivalries within the Holy Roman Empire, but soon became an ever-evolving Europe-wide struggle involving most major Catholic and Protestant powers.

This work, written in Latin by the Genovese historian Petrus Baptista Bergus (also known as Pietro Borgo), traces the Swedish involvement in the war under their King, Gustavus Adolphus. Bergus is said to have fought as a mercenary under the King, and thus to have personally witnessed many of the courageous acts he credits to him. The title of the work alludes to Julius Caesar’s account of the Gallic Wars, Commentarii de Bello Gallico, reflecting a rhetorical effort to invest the emerging power’s campaign with an ancient legitimacy. In the same vein, the figure at the center of this frontispiece is likely Bellona, the Roman goddess of war, whose likeness was rediscovered in Europe during the Renaissance. To the left of the figure, we can see a clear representation of the violence and destruction wrought by the war, whilst to the right, we see the coat of arms of the prominent Barberini family. Bergus dedicated his book to Francesco Barberini, a cardinal and nephew of the Pope, Urban VIII.