Excellence in Education: Celebrating the Artistic, Academic, Athletic, and Administrative Achievements of the Women of Tulane University / Women with Achievements in Athletics / Barbara Farris / 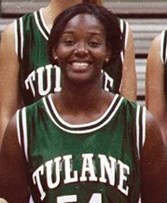 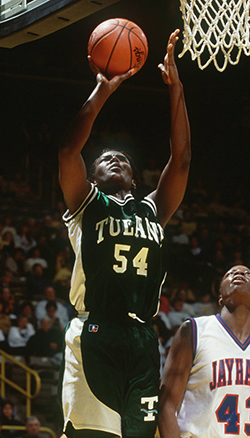 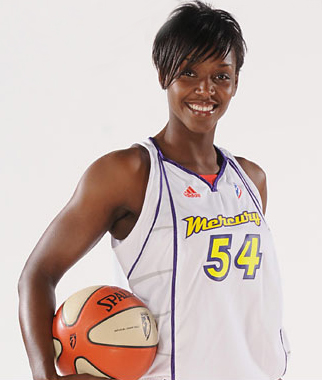 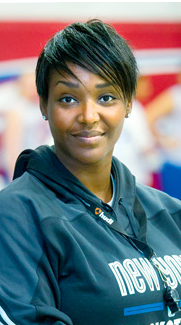 Barbara Farris is a Naturally N’Awlins alumna of Tulane. Born in Harvey, she attended St. Martin’s Episcopal School in Metairie and was a shining star for the Saints, leading them to back-to-back state titles in 1993 and 1994 with a combined record of 66-4 which included a perfect season in 1993, her junior year. Her senior stats were impressive: she averaged 14.3 points and 7.6 rebounds and shot 74 percent from the field, even with missing a month due to a broken wrist. For her achievements, she was named a two-time all-Louisiana prep player. The 6’3” player was recruited by new Tulane Green Wave women’s basketball coach Lisa Stockton and signed with the Green Wave in April 1994.

At Tulane, her impact was felt immediately. Barbara was the leading scorer for the Lady Wave her freshman year, averaging 15.6 points per game. Evidently, her size and aggressive approach earned her the nickname “Freight Train Farris.” The Green Wave amassed a 19-9 record during the season on its way to earning its first NCAA tournament appearance. Unfortunately, they were eliminated in the first round by Texas Tech. Barbara was selected Freshman of the Year by the Louisiana Sport Writers Association and was named to the Second Team All-Louisiana Women’s Collegiate Basketball Team. In 1995-96, she was not only the leading scorer, but also the leading rebounder; this contributed to the Green Wave making a second trip to the NCAA tournament, where they suffered another first-round elimination, this time at the hands of Colorado. Barbara was again named to the Second Team of the All-Louisiana Teams by the Louisiana Sports Writers Association.

Barbara said that it was during her time at Tulane that her coaches taught her how to be an effective team player and leader. These lessons were evident in the stunning success of her junior year, when the Green Wave was practically unstoppable. They rolled through the season to win the Conference-USA Championship, earning their third straight berth in the NCAA tournament. Their 26-5 record also earned them a national ranking of 23rd, and a 4th seed in their bracket. The Lady Wave won their first game at NCAAs, defeating University of California-Santa Barbara; Barbara contributed 16 points in the effort. They were eliminated in the second round by George Washington University. For her brilliance on the court that season, Barbara was voted to First Team of the All-Louisiana Teams, with a scoring average of 13.7 points per game and 7.7 rebounds per game; she was also named All-Star First Team for Conference-USA. In April, she was also honored as the Outstanding Female Athlete, Greater New Orleans by the Sugar Bowl’s Sports Selection Committee – Peyton Manning received the award for Outstanding Amateur Athlete, Greater New Orleans at the same event.

Barbara’s talent continued to drive the Green Wave towards success during her senior year, when they again reached the NCAAs with a 21-6 record. More impressive than her 14.2 points and a team-best 8.3 rebounds per game, Barbara shot a whopping 71.6 percent of her field goals, the second-best percentage in the country. Unfortunately, her 21 points were not enough against Kansas, who eliminated the Wave in the first round. Her phenomenally accurate shooting fell just short of the NCAA record for season field goal percentage: she shot 51 for 210, a .719 percentage, which was just two shots’ variance from the record-holder’s mark of .721. As it is, .719 was the third-best season by a Division I player. Farris also finished with the sixth-best career percentage, 660-for-1,036. At the time, she was No. 4 in career scoring at Tulane with 1,729 points and No. 2 in rebounds with 939.

During her Tulane career, Barbara started in 114 games and scored 1,729 points, making 408 out of 684 free throw attempts, which is second on the record-charts; she also had Tulane’s second-highest career totals of rebounds (939), offensive rebounds (351), defensive rebounds (588), free throws made (408) and free throws attempted (684). She averaged 16.7 points and 6.8 rebounds in her career, becoming the only player in school history to achieve all-conference honors all four years. She still holds the school’s career field-goal percentage record (63.7 percent). For all of these reasons, and for her outstanding leadership skills, she was inducted into the Tulane Athletics Hall of Fame in 2004. Barbara said that her time at Tulane “helped shape [her] as a person both on the court and as a member of the university.”

Barbara was invited to participate in the first Women’s Collegiate World Games in April, 1998; the showcase of seniors was nationally televised on Fox regional sports networks, and Barbara was chosen for the All-Tournament team. Shortly thereafter, she was the third player taken in the first round of the draft by the New England Blizzard in the American Basketball League. After graduating a few days later with a bachelor’s degree in sociology, she headed to New England to start practicing with new team. By the time the Blizzard started its season in November, she had impressed them all not only with her shooting and rebounding ability, but with her quickness and agility. She was averaging 5.1 rebounds per game (13 games, 66 rebounds in 1998-99) when the league folded in December 1998. She was drafted again, taken in the second round of the 2000 WNBA draft (22nd pick overall) by the Detroit Shock in 2000. From 2000-2005, she played for the WNBA’s Detroit Shock, helping them to win the national championship in 2003. Afterwards, Barbara played for the New York Liberty from 2006-2007 and she played for the Phoenix Mercury for a year before returning to the Detroit Shock in 2009.

After leaving professional play, Barbara coached at Bonnabel High school for a year before accepted a position as assistant head coach at John Curtis High School in 2011. Concurrently, she was also an assistant coach for the New York Liberty for two years under Bill Laimbeer. In 2014, she was named New Orleans Small Schools Girls’ Basketball Coach of the Year by the Times-Picayune. In 2016, as the head of the girls’ basketball program at Curtis and a psychology teacher at the school, she won a scholarship from the National Basketball Retired Players Association (NBRPA) to attend Kaplan University; with her scholarship, she intended to pursue a master of arts in teaching. In March 2017, Barbara coached the John Curtis Girls’ Basketball Team to the Division 1 State Championships, and in August, that was topped when Barbara was inducted into the Greater New Orleans Sports Hall of Fame.