Excellence in Education: Celebrating the Artistic, Academic, Athletic, and Administrative Achievements of the Women of Tulane University / Women with Achievements in Athletics / Linda Tuero / 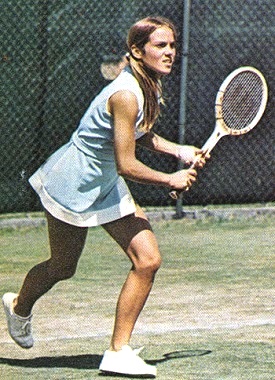 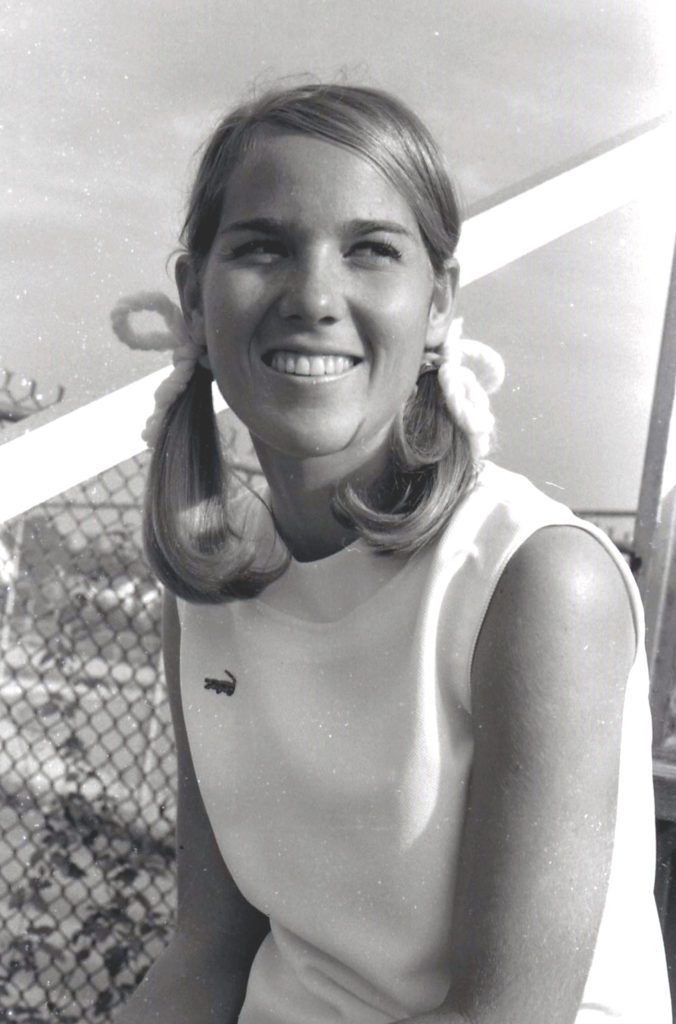 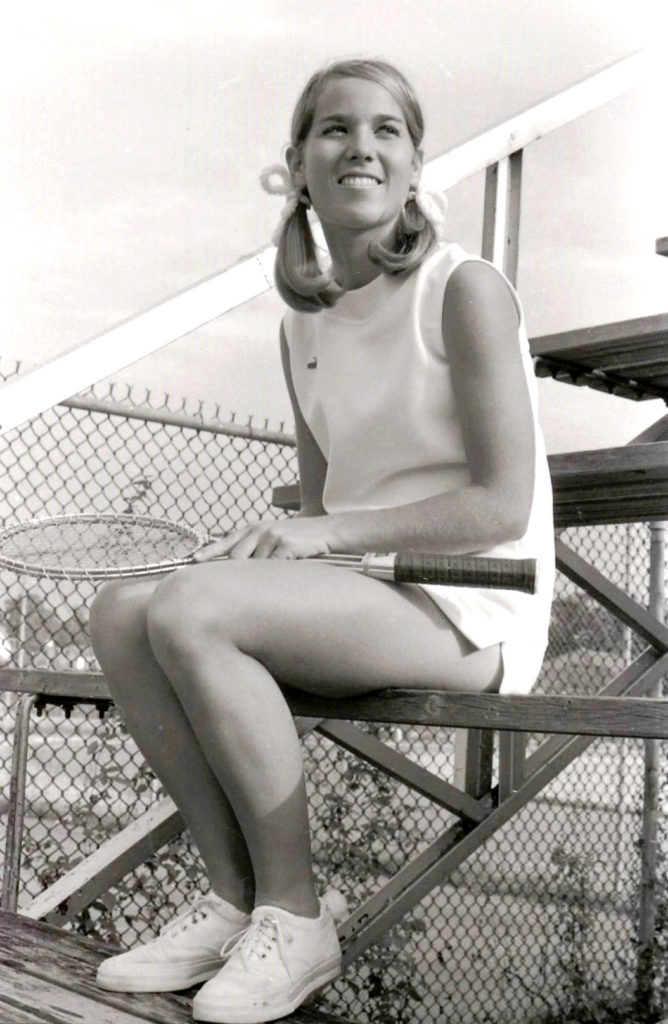 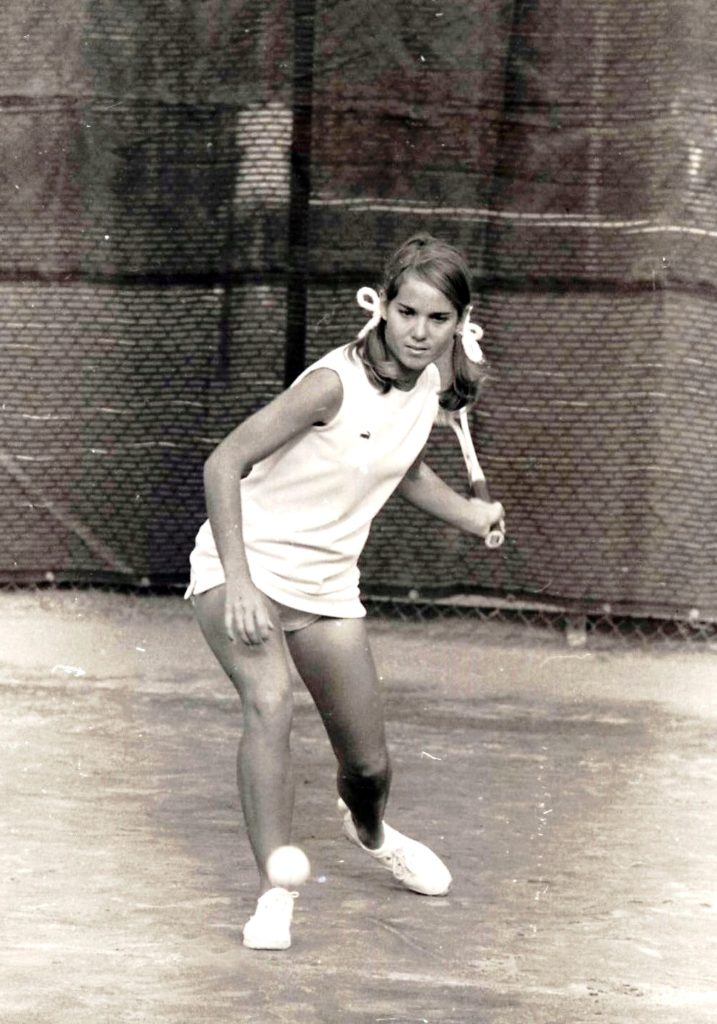 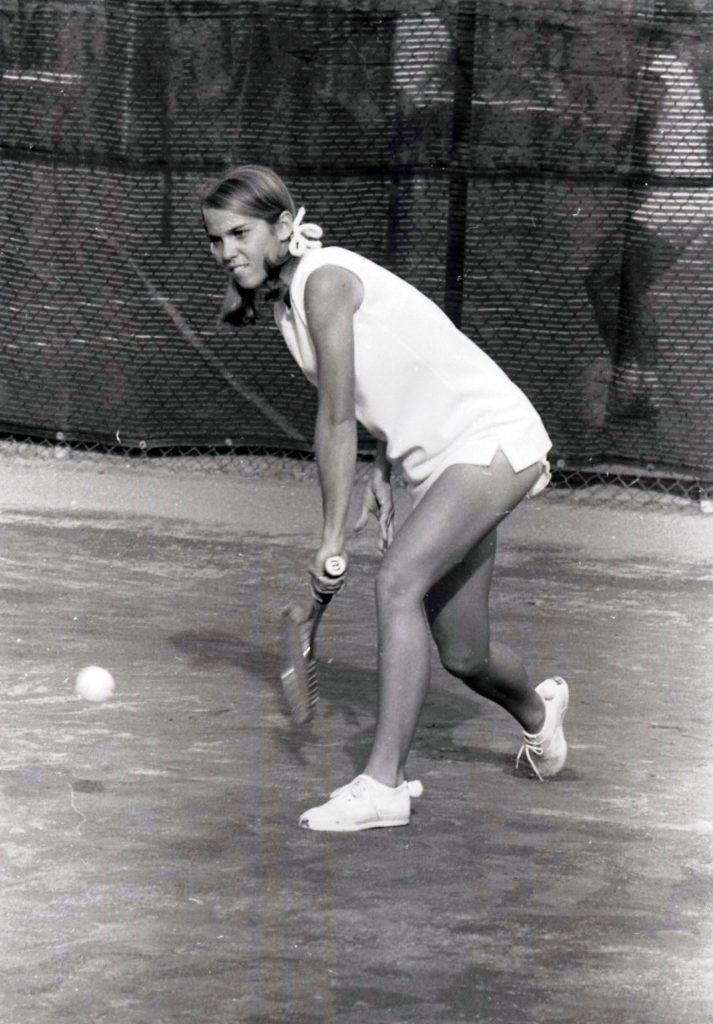 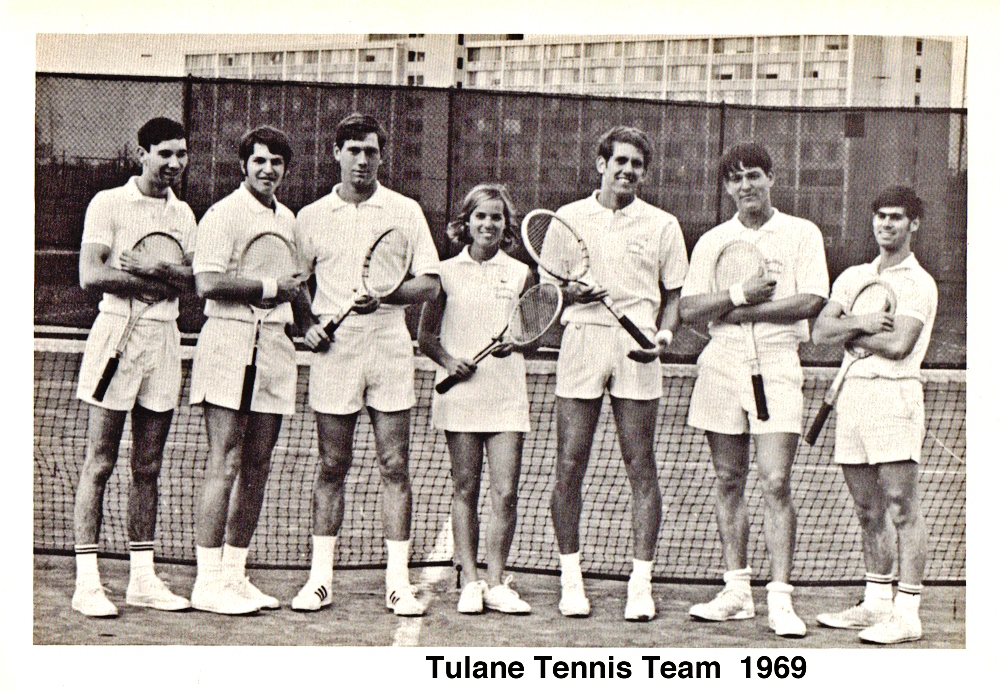 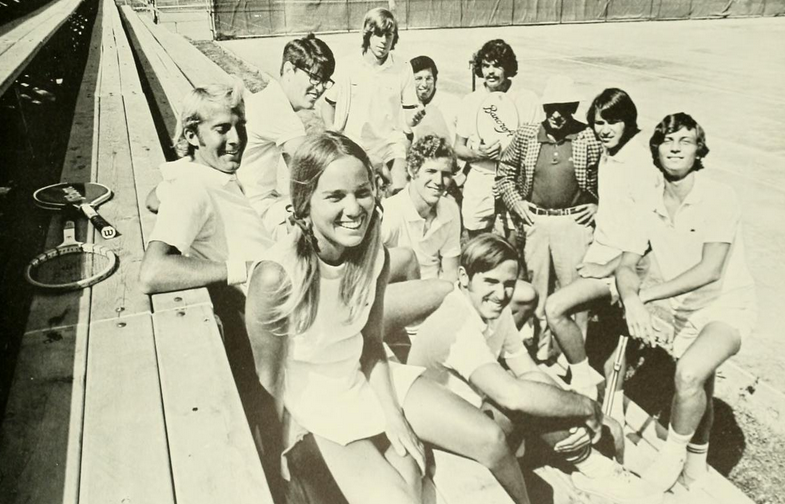 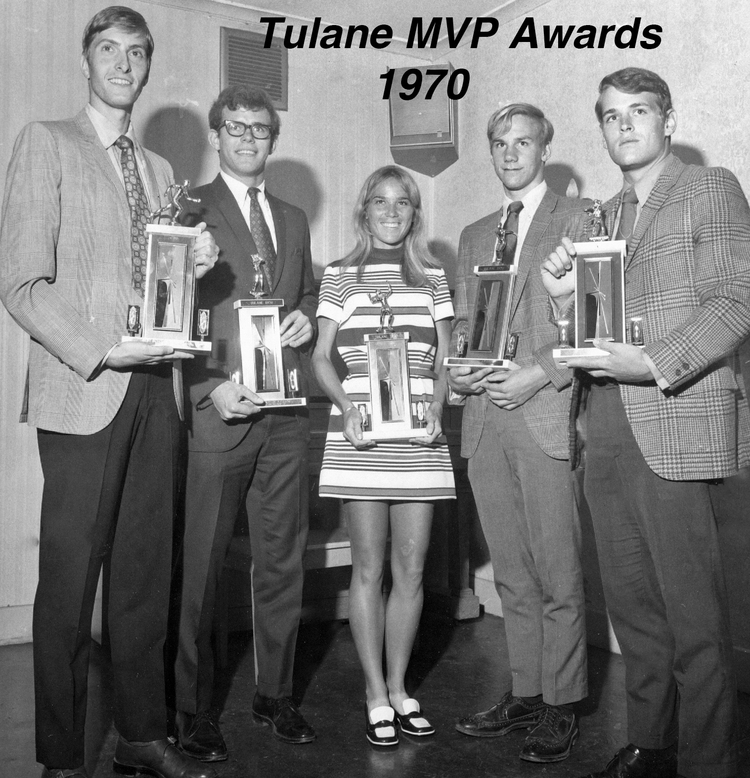 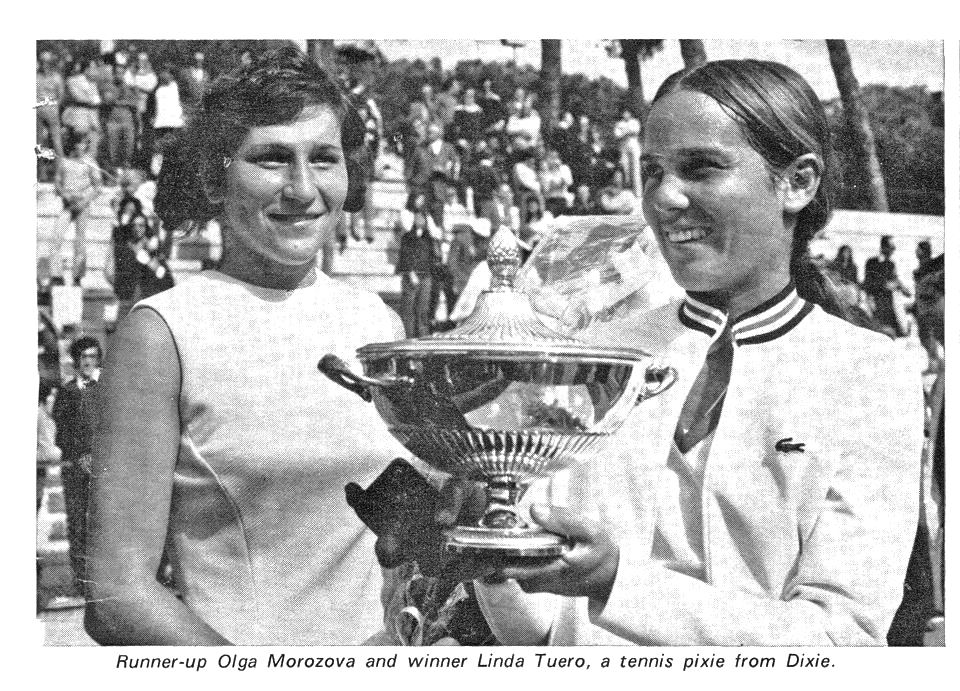 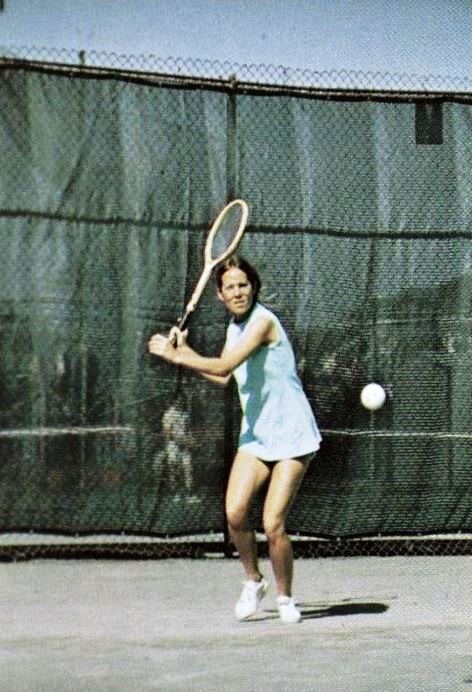 A native Louisianian, Linda Tuero “the Pixie from Dixie” began playing tennis at the age of ten, and was something of a prodigy – she won her first tournament, the New Orleans City Championships sponsored by New Orleans Recreational Department, six months later. She started taking lessons from Emmett Paré at the New Orleans Lawn Tennis Club. Paré, the legendary men’s tennis coach at Tulane University, coached her to six junior national titles in singles and doubles, as well as the Girl’s National Interscholastic Championship, by the time she graduated from St. Martin’s Episcopal School in 1968.

Linda was the first woman to be awarded an athletic scholarship at Tulane University, and the first woman to play on a Tulane varsity team. At the time, Tulane did not have a women’s varsity tennis team, so Linda played on the men’s varsity tennis team – which meant that she had to make some concessions and adjustments due to her gender and the realities of team life. She did not travel with the team to away matches, and she only played when both the visiting coach and player who she would be matched against consented – usually she faced the No. 5 or No. 6 singles position. Not all schools agreed to play against a woman, especially when she kept beating visiting male players; it seemed that schools purposely avoided playing against her.

Linda’s limited schedule netted a collegiate record of 8-1 over a three-year period. In order to continue to hone her skills, Linda was allowed to play on the women’s professional tennis circuit but maintain her amateur status while studying at Tulane, and during those years, she won 3 amateur tennis championships: 1969 US Amateur Championship, 1970 US Amateur Championship, and the 1970 US Open Clay Court Championship, with a semi-final victory over Nancy Richey, then the #1 clay court woman player in the world. In 1969, she was ranked the #1 woman in the world under the age of 21. Linda graduated from Tulane cum laude after three and a half years in 1971 with a bachelor’s degree in psychology and began her professional tennis career.

Linda’s baseline game was superb on clay courts, so she had great success on the international circuit, with its many tournaments on clay. In 1972, her first year on the professional tour, she won the Italian Open Singles title in Rome and the first International Tournament of Madrid (Madrid Open), and was a semi-finalist in the Canadian Open, WTA German Open, the US Open Clay Courts, and the Western and Southern Open, losing to such notables as Chris Evert, Evonne Goolagong, and Margaret Smith Court. A major win on her side, however, was a victory over a young Martina Navratilova in 1973.

Representing the United States, Linda played on the Wightman Cup and Federation Cup Teams in 1972 and 1973, serving as Federation Cup Captain in 1973. Other tennis highlights include reaching the third round of the US Open in 1968 and 1971, the quarterfinals in the French Open, as well as the third round at Wimbledon in 1971, and reaching the No. 10 world ranking for women in 1972.

In 1973, while filming a bit part as a tennis player extra in the movie “The Exorcist” on a whim, she met the movie’s screenwriter and novelist, William Peter Blatty, and fell in love. Between dating Blatty and running into Chris Evert repeatedly at tournaments and coming out on the losing end of matches, Linda felt that she had lost heart. After finishing out her Fed and Wightman Cup responsibilities in 1973, she quit the professional circuit; she was not yet 25 years old.

Linda and Blatty got married two years later, and she spent time working with him; she even played a small part in his next movie, “The Ninth Configuration,” (1980). They had two children, Jennifer and Billy. Jenn attended West Point and served as an officer in Afghanistan and Iraq; she had been a captain for the women’s tennis team and a Captain in the Army. Billy was a southern nightclub owner, as well as being a major event producer in the south. Linda’s marriage ended in divorce, and Linda married Bill Paul (now deceased), with whom she had one son, David Paul.

Linda returned to Tulane in 2000 to earn a second bachelor’s degree (2002) and a master’s degree (2004) in anthropology, specializing in paleoanthropology (the scientific study of the human fossil record). She put this knowledge to use when she went to Africa to excavate with Rutgers University in northern Kenya, where the earliest hominid discoveries have been made.

In 2006, Linda met former business school dean, Dr. Bill Lindsley, and they married in 2007. The Lindsleys live in Savannah, Georgia, the home base for their paleontological fossil finds, which Linda identifies, catalogs, and displays in a mini-museum (http://lindsleymania.com/#/lorem-ipsum-demo/ ).