Excellence in Education: Celebrating the Artistic, Academic, Athletic, and Administrative Achievements of the Women of Tulane University / Women with Achievements in Administration / Beatrice “Bea” Field / 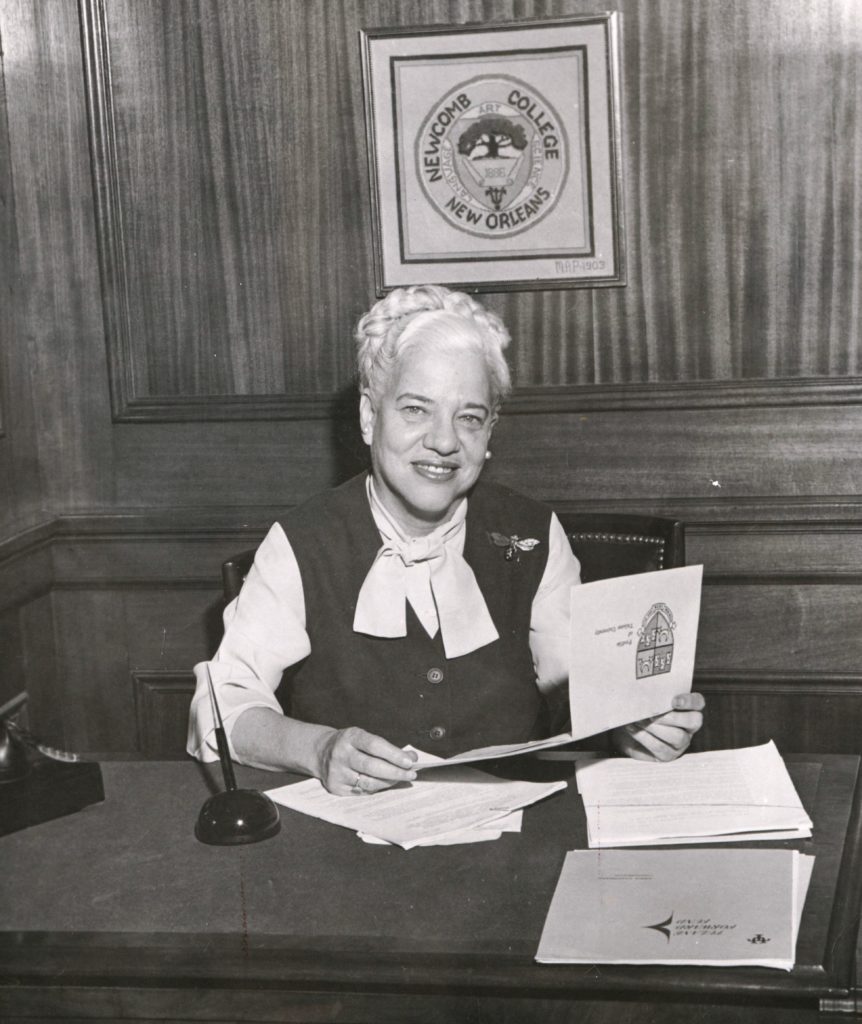 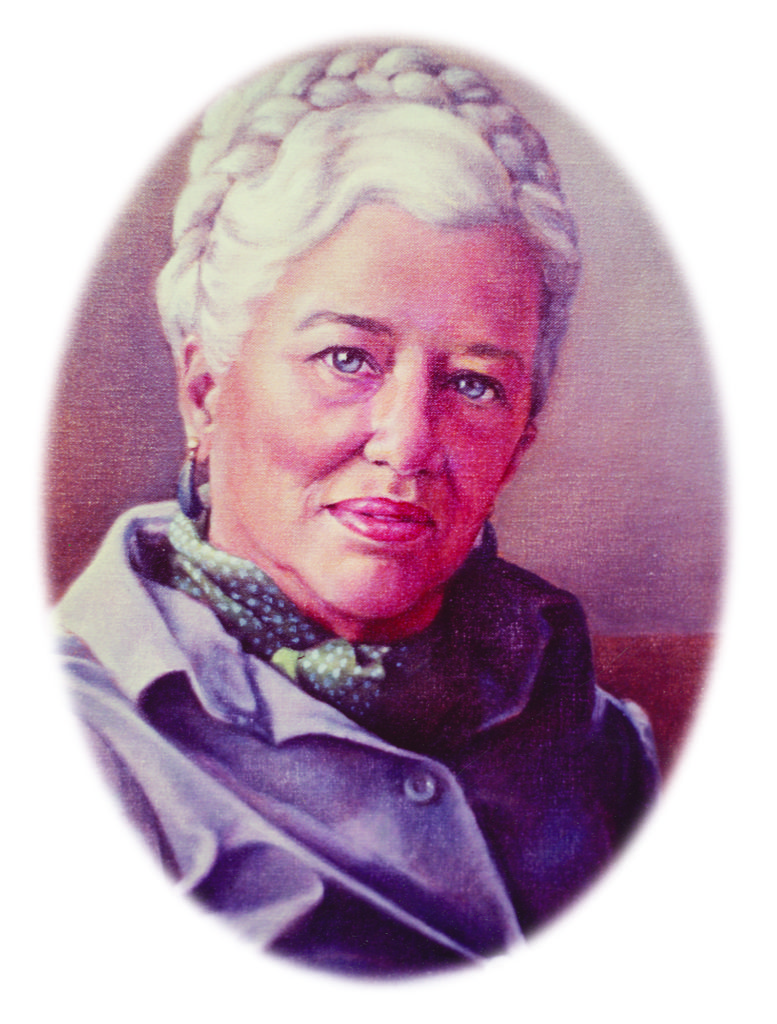 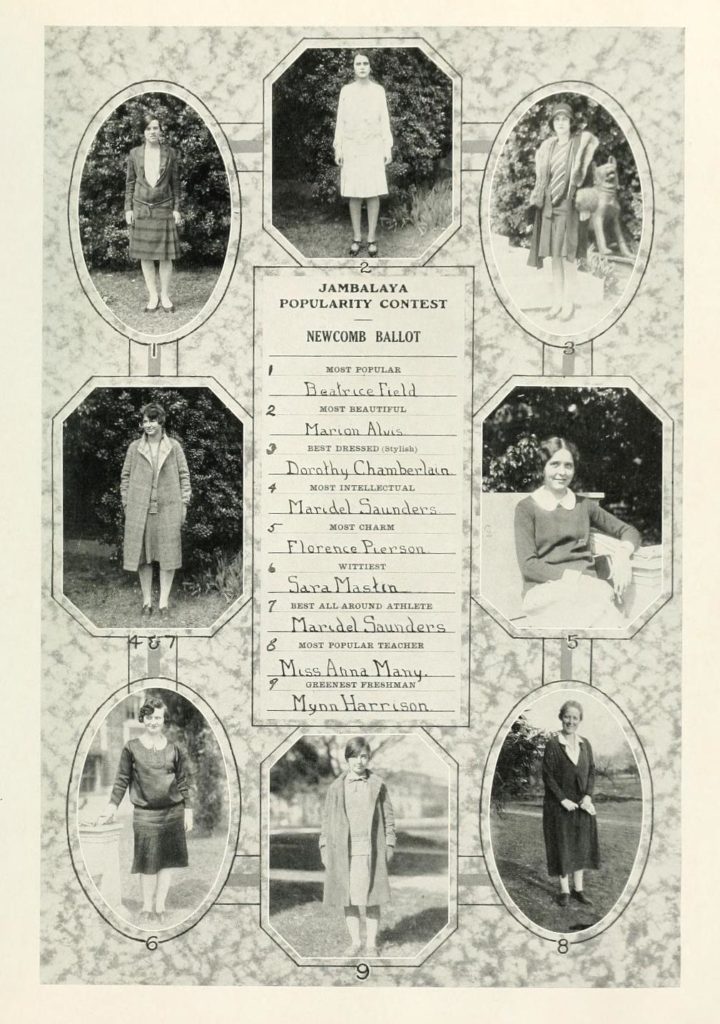 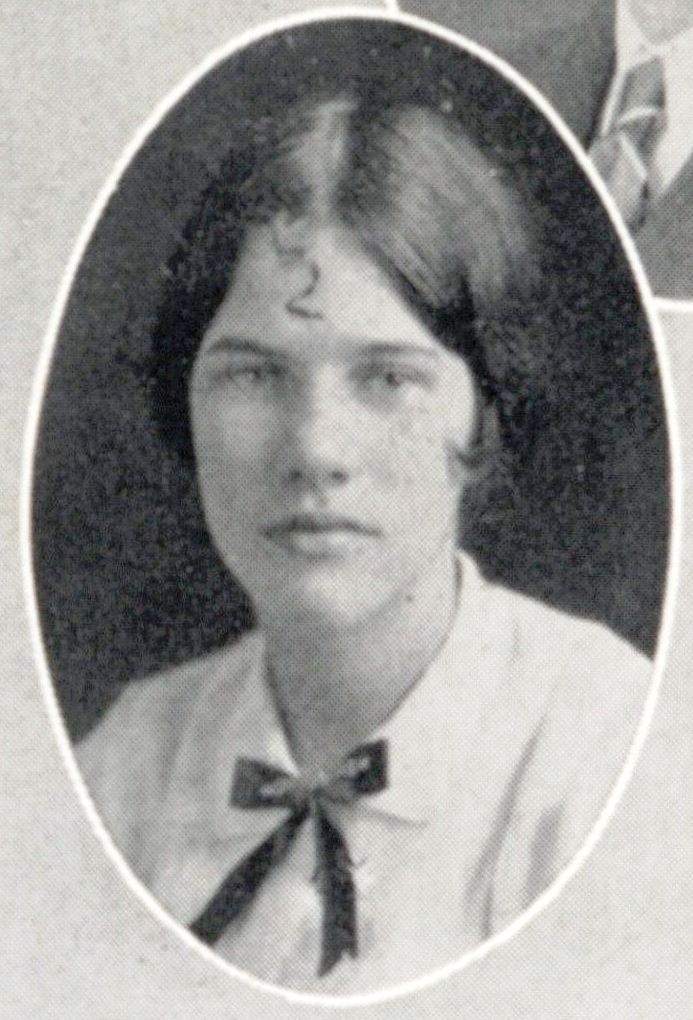 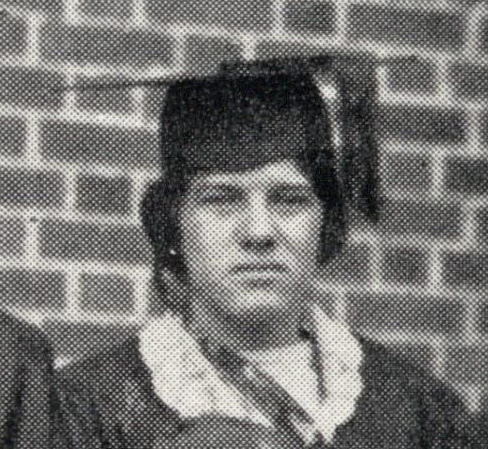 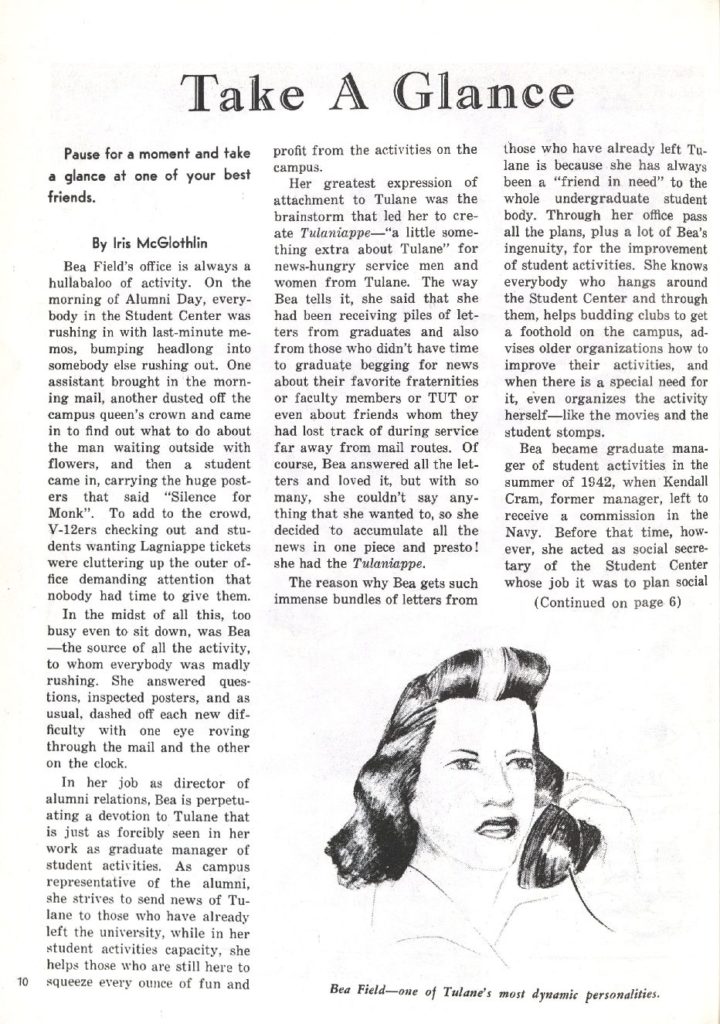 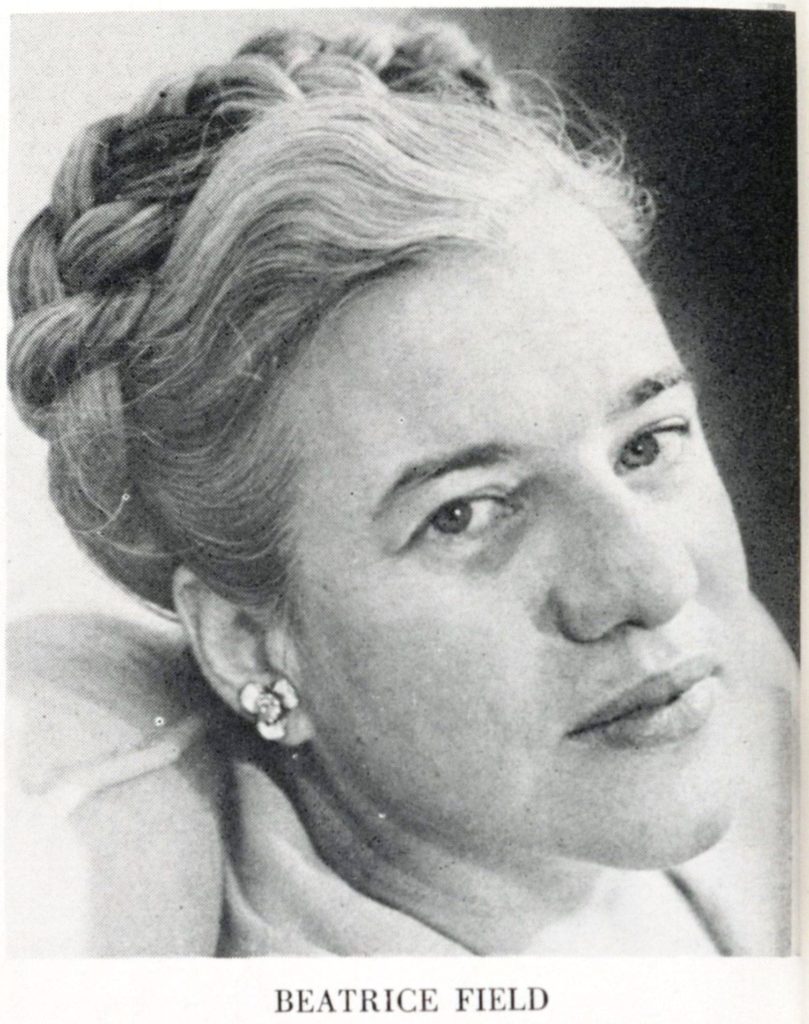 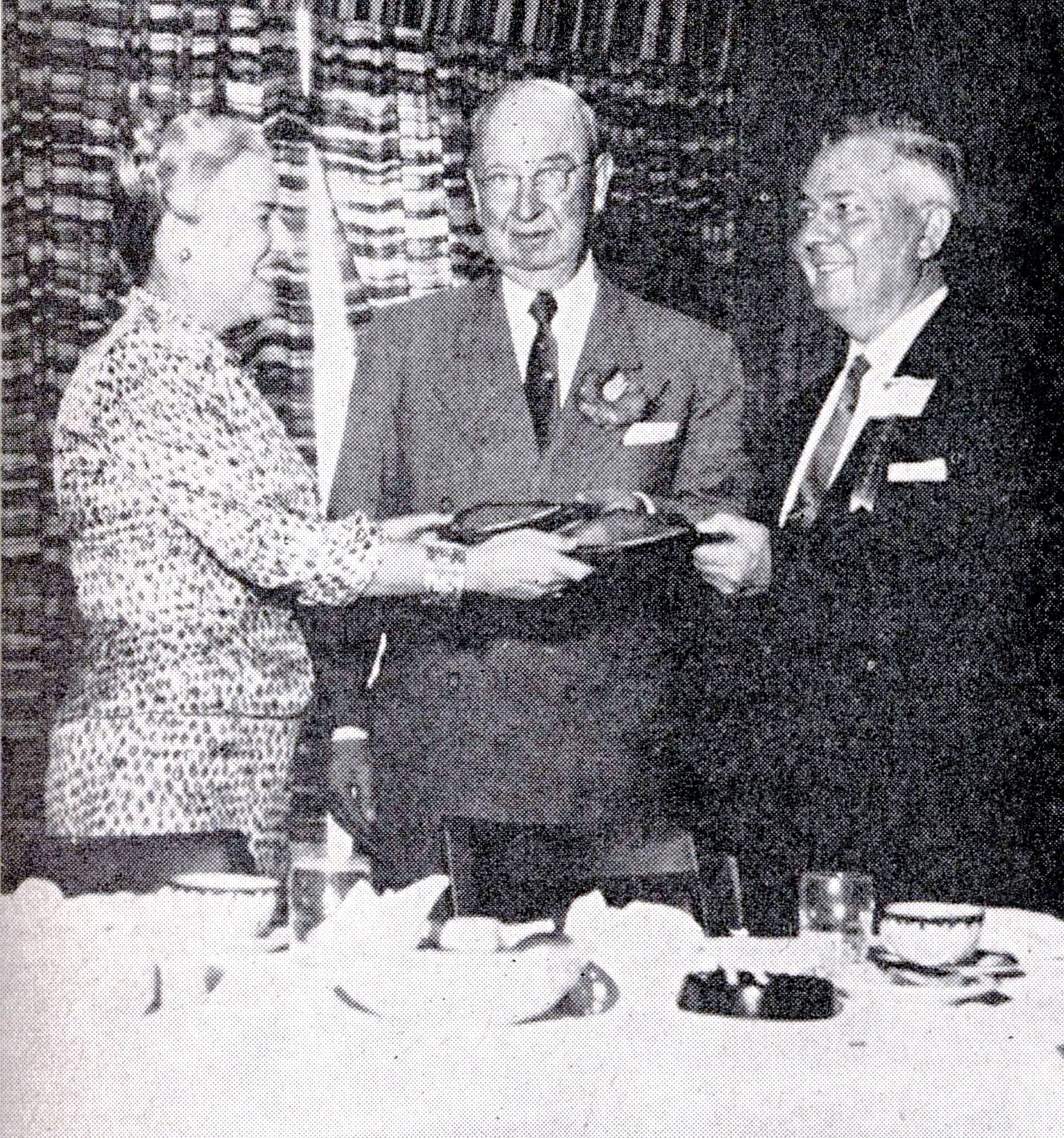 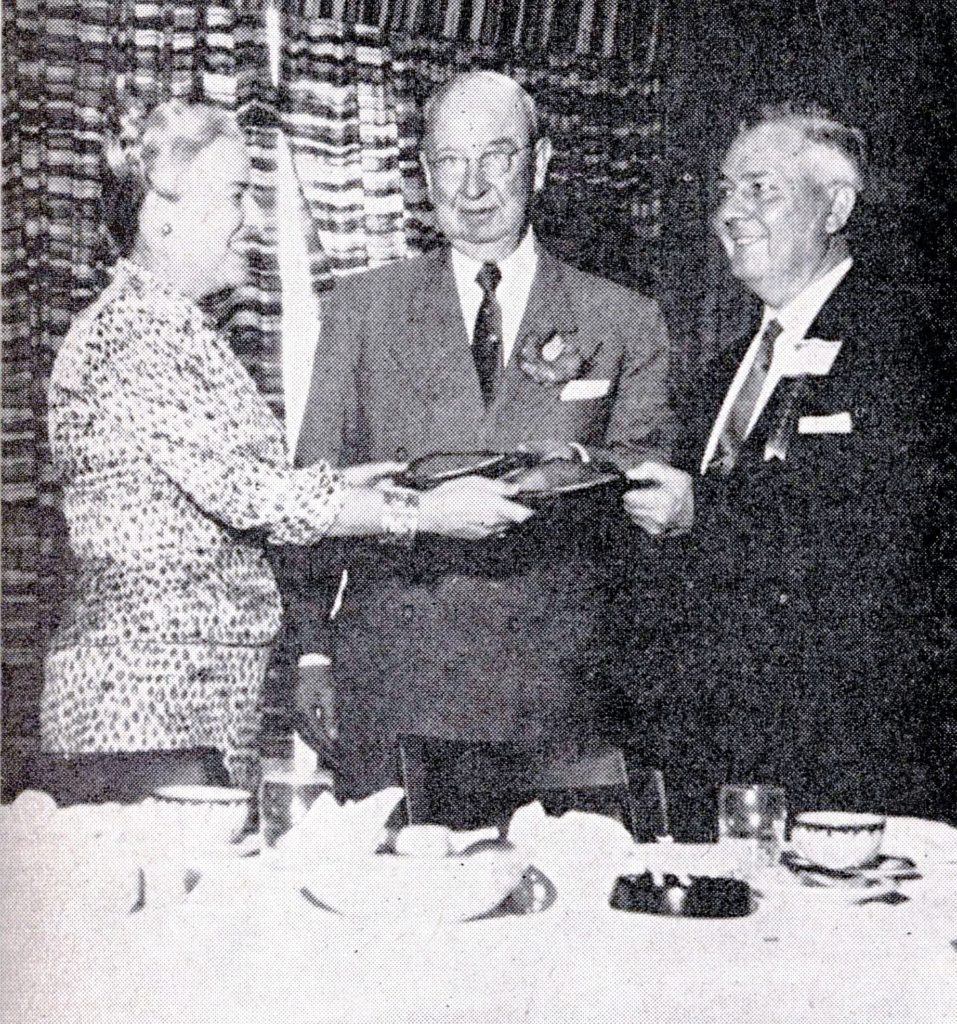 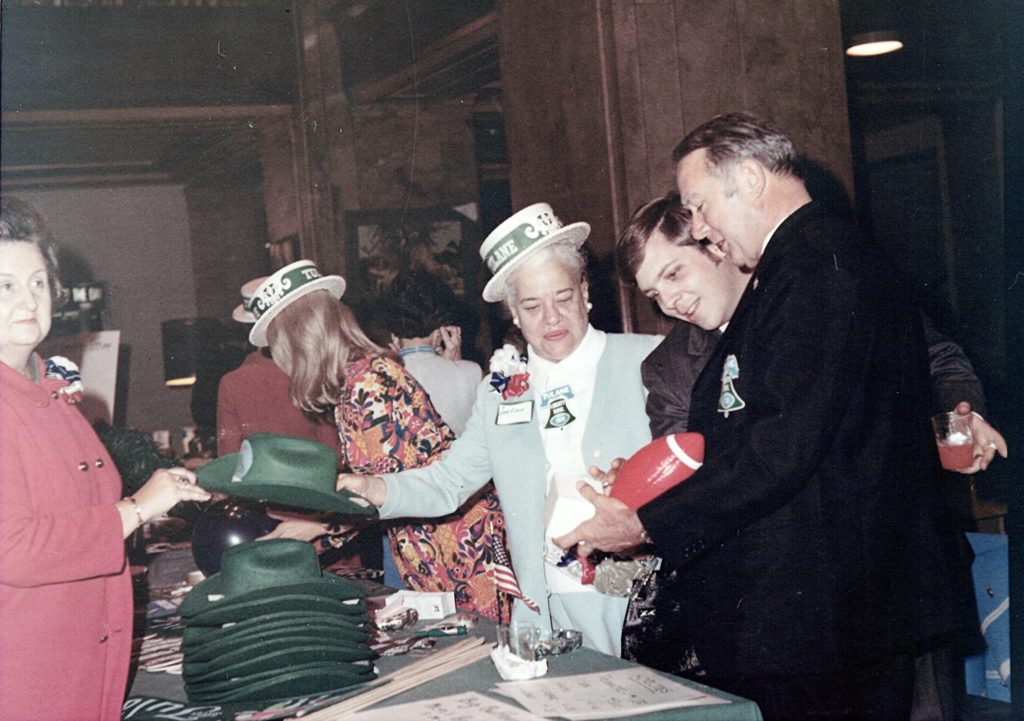 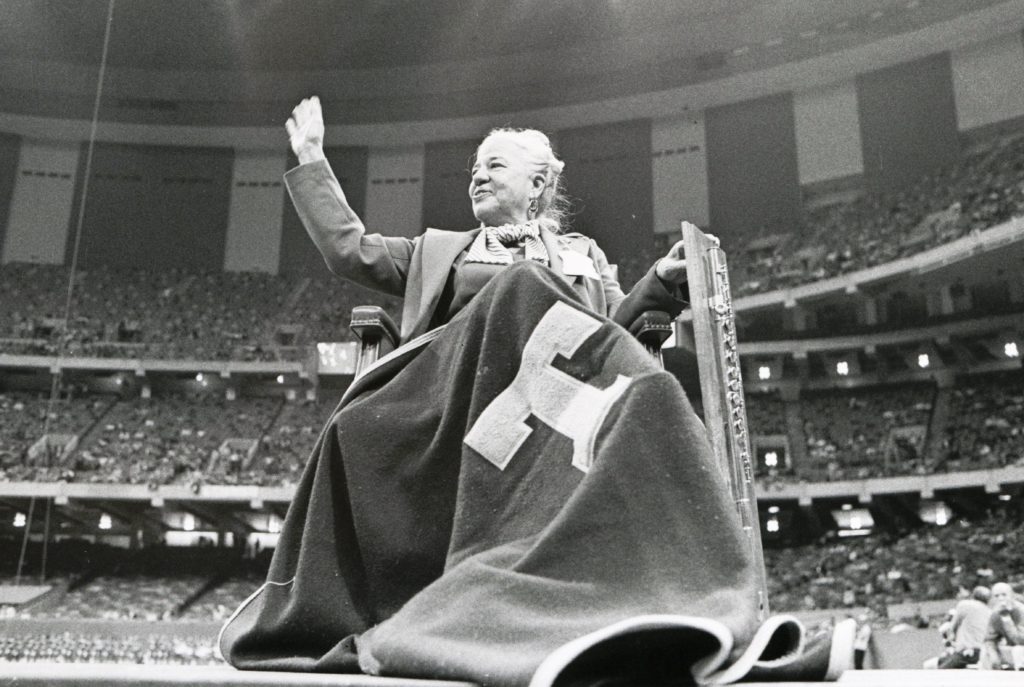 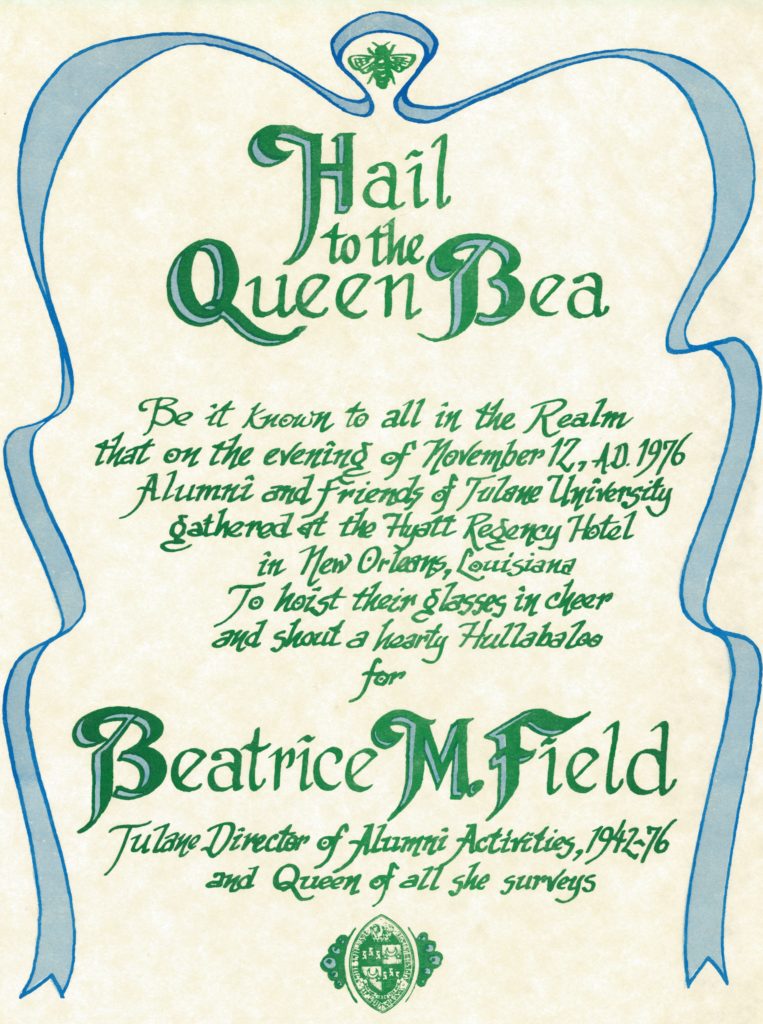 If you polled Tulane’s 20th century alumni and asked them who was the one person they remembered the most from their years at Tulane, many would not hesitate to respond with the name of former Director of Alumni Affairs, Beatrice “Bea” Field. For many, Queen Bea *was* Tulane.

Bea won a scholarship to Newcomb College in 1924 and upon arrival from Lake Charles, Louisiana, she immediately jumped into collegiate life, joining several organizations. By sophomore year, she was Class Secretary, and she belonged to more groups and participated in more activities than any other woman in her class. She was elected president of her class in her junior year, while maintaining a rigorous activity schedule. In Newcomb College, an honorary fraternity –Alpha Sigma Sigma–was organized in 1916 to promote interest in college and class activities; to belong, a student was elected into the fraternity during their junior year in recognition of their outstanding participation and class loyalty. I don’t think there could have been anyone who belonged to more organizations or teams than Bea.

In her senior year alone, in addition to being elected into Alpha Sigma Sigma, Bea was president of the Newcomb Student Government Association, a member of the Tulane Student Council, the Newcomb Student Council, the Jennie C. Nixon Debating Club, the Newcomb Dramatic Club, the Josephine Louise House Council, the Y.W.C.A. House Council, was Comus in the May Day pageant, and was voted Most Popular in the Jambalaya Popularity Contest. And, although she regretfully quit playing both Newcomb basketball and baseball after three years in order to make room for all of those activities, she did still continue to play volleyball for a fourth year… Whew!

Bea earned her bachelor’s degree in Latin from Newcomb College in 1928 and later, a master’s degree in Latin from Tulane in 1942. Appointed assistant director of alumni services while still a student, she spent her entire career as the head of alumni activities at Tulane, starting in 1942 and working for 34 years until her retirement in 1976. She was the most well-known Tulanian among alumni groups not only due to her high vocational visibility and distinction, but probably also due to the use of her hand-held amplified megaphone at football games!

In 1954, Bea established the Tulane Educational Conference as a way for Tulane faculty to get out on the road to bring its scholarly research to the alumni clubs in distant cities. For 22 years, the annual Tulane Educational Conference was one of the top notch alumni outreach projects in the country. Bea was also responsible for creating the Tulane Alumni Fund, which received national recognition as well.

Bea’s innovation and job performance excellence was recognized beyond the Tulane community. In 1964-1965, she was elected national chairman of the board of the American Alumni Council, a position only she and one other woman held during the existence of that esteemed group (1913-1974) before it merged with American College Public Relations Association to form the current Council for Advancement and Support of Education). On campus, she was honored as well: The Beatrice Field Scholarship was established by the presidents under whom she served (Dr. Rufus Harris, Dr. Herbert Longenecker, and Dr. Sheldon Hackney) to provide assistance for needy students. The Bea Field Alumni Relations award was established by the Tulane Student Senate to recognize outstanding contributions made by students to student-alumni relations. After her retirement in 1976, Bea stayed on at Tulane as a consultant to Tulane’s president and put her encyclopedic knowledge of the alumni of the university to good use, compiling a historical fact book of the university titled “Potpourri: An Assortment of Tulane’s People and Places,” which was released in August 1983. Shortly before her death in 1986, she received Newcomb’s Lifetime Service Award.

For all of her achievements, she was fondly known as “Miss Tulane,”and in recognition of all that she did for Tulane, the Alumni House was officially renamed the Bea Field Alumni House in 2011. A portrait of Bea, given by past presidents of the Alumni Association, hangs in the Alumni House to welcome alumni back.