The image below illustrates two examples of photographic format called stereograph (also called a stereoview or stereoscopic) that appears as a paper card (A) or glass slide (B) containing two nearly identical photographs (approximately 3.5 inches in size).  A photographer takes a double picture using a special camera with two lenses spaced 2.5 inches apart which is the same approximate space between a set of human eyes.  When a person views the pair of photographs through a stereoscope, the brain merges the two to create a single image with a three dimensional effect.  This effect was first described in 1838 by British physicist, Sir Charles Wheatstone, during a presentation on the physiology of human vision where he demonstrated how viewing two separate, yet identical line drawings through a laboratory stereoscope using mirrors could produce a three dimensional image. You can read his original paper here:  Wheatstone’s article. 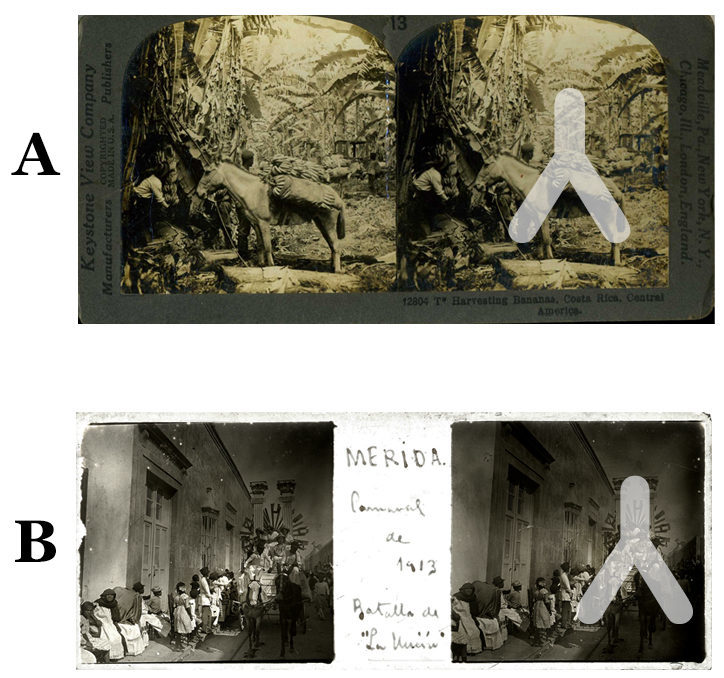 Examples of stereographs: A, paper card; B, glass slide.

To create a successful stereograph, the photographer must orchestrate elements not only along the x- and y-axis (left to right; up and down) but also along the z-axis (foreground to background).  Many successful and pleasing shots have a Y-shaped structure to them, either in terms of framing physical objects or through contrasting light and dark areas (see the examples above).

See if you can detect the Y-structure in the various examples of stereographs displayed throughout the exhibit.