Conflict and Coexistence in Jerusalem / Interfaith Relationships in Israeli Films / 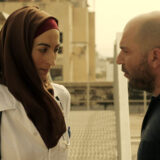 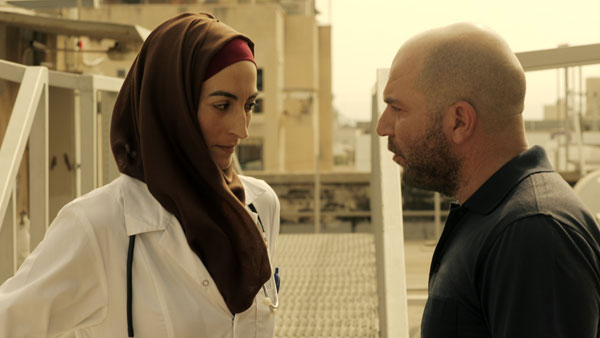 Constructing a National Identity Breaks a Heart in Two: Interfaith Relationships in Films about the Arab-Israeli Conflict

Interfaith marriages only make up a small percent of Israel’s population; however, they are a somewhat common archetype in popular culture, such as movies and television series. When clicking through Netflix, Hulu, and HBO, it is not surprising to note an Israeli film in the popular screening sections. With the ever-increasing intertwined nature of the global arena, films resulting from specific industries can be telling of the popular culture and rhetoric at that time and place. On the other hand, films have a certain freedom to illustrate a reality one might desire that is not as simple or easy in actuality. For example, the marriage laws in Israel make it extremely challenging for individuals of differing faiths to get married, as the state recognizes halakha, or religious law, as ruling of the state of Israel (Perez 2021). These laws, while in place to protect the Jewish national identity of the state, prohibit an environment of coexistence and integration that is arguably needed within a state attempting to dilute conflict. When Israel was established as a Jewish State in 1948, there was a fear that if the Jewish majority was not upheld, especially after the Holocaust, the state would lose this unified identity and land that was recently obtained. Due to these laws and practices, being in an interfaith relationship or attempting to get married to someone of a differing religion becomes increasingly challenging and impractical. This barrier, that is also noted in the geography and the education systems in Israel, between groups of people creates unnecessary tension and makes empathy and understanding with the other seem far from reach (Purwanta 2021). However, since there are depictions of interfaith relationships in films and series like Muna and Fauda, the question of how Israeli filmmakers treat the sensitive issue of interfaith relationships and marriages that are restricted in law and practice is raised. 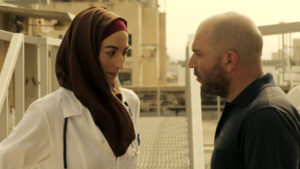 Doron talking to Shirin in Fauda. 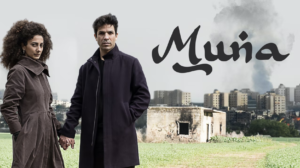 Cover photo for the series Muna.

While interviewing an Israeli scholar about the climate of the Israeli film industry, and the archetype of interfaith relationships in movies, she provided support for claims found in prior research. For example, she noted that Arab women and Israeli men are more likely to be shown, but also built upon this information by saying that “a commercial network would not air this type of love affair” since Liberals and Conservatives have become more polarized since Netanyahu’s election. She stated that being progressive in a film “depends on the courage a creator has, and connections.” She also said that the reason Arab women and Israeli men are depicted more often is due to the filmmakers’ intentions, which is usually speaking from personal experience or playing into typical colonial fantasy. Muna, on the one hand, is straight out of the filmmaker Mira Awad’s “complexes, thoughts, and experiences.” Awad is an Israeli Palestinian who is married to a Jewish man, which could be the inspiration for the feminist subversive view and role she has in popular culture. Fauda, on the other hand, shows male filmmakers attempting to illustrate a fantasy that is not achievable in reality, and their desire to display a submissive woman to an Israeli soldier for power and control.

Learning more about the Israeli film industry and the movies and television series that depict interfaith relationships, alongside research about what is happening to integrate with the “out group” on the ground, creates a study of popular culture interacting with reality (and politics). The Israeli films that include interfaith relationships do not display a situation that the filmmakers believe is realistic, but instead exacerbate the sensitive and uncommon topic for dramatic reasoning. Since interfaith relationships are restricted in law and practice, the storyline of two people from different religions falling in love in Israel is not practical, authentic, or common in real life, and is arguably a fairytale depiction based on unrealistic scenarios.

By appreciating the connections between popular culture and politics, a more optimistic future is possible as the leaders, the average citizens, and the children will be working together in a more productive society. Instead, as the current situation presents, few filmmakers have the ability to share their mindset, as the state funds a majority of the industry, and the ones that do present a progressive situation need courage, connections, and money, and typically do so for personal reasons or to perpetuate an environment of colonialism. When asking a group of Israeli students about their experience with interfaith relationships on campus, they all shook their heads in disbelief as they hardly understood the question that was being asked: “Are any students in interfaith relationships?” Most responded that they had never heard of such a thing, or that most families and communities would not respect this type of love. Hopefully in the future, with the coincided effort of filmmakers and politicians, this question is not answered with blank stares and side-eyed glances, but rather smiles and personal anecdotes. 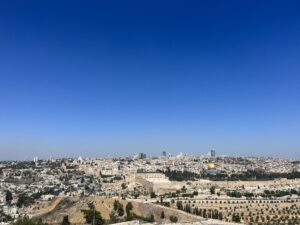