Virtual Exhibition on the Evolution of Mardi Gras Indians

To walk through the exhibition in a digital space, follow this link. To move around, begin by clicking the screen to lock your cursor within the frame. Use keys W, A, S, and D or arrow keys to move. Use the mouse to look around. Use the escape button to switch in and out. Fullscreen highly suggested.

Huge thanks to Jesse Toohey (https://jtoohey.com) for creating this virtual space. 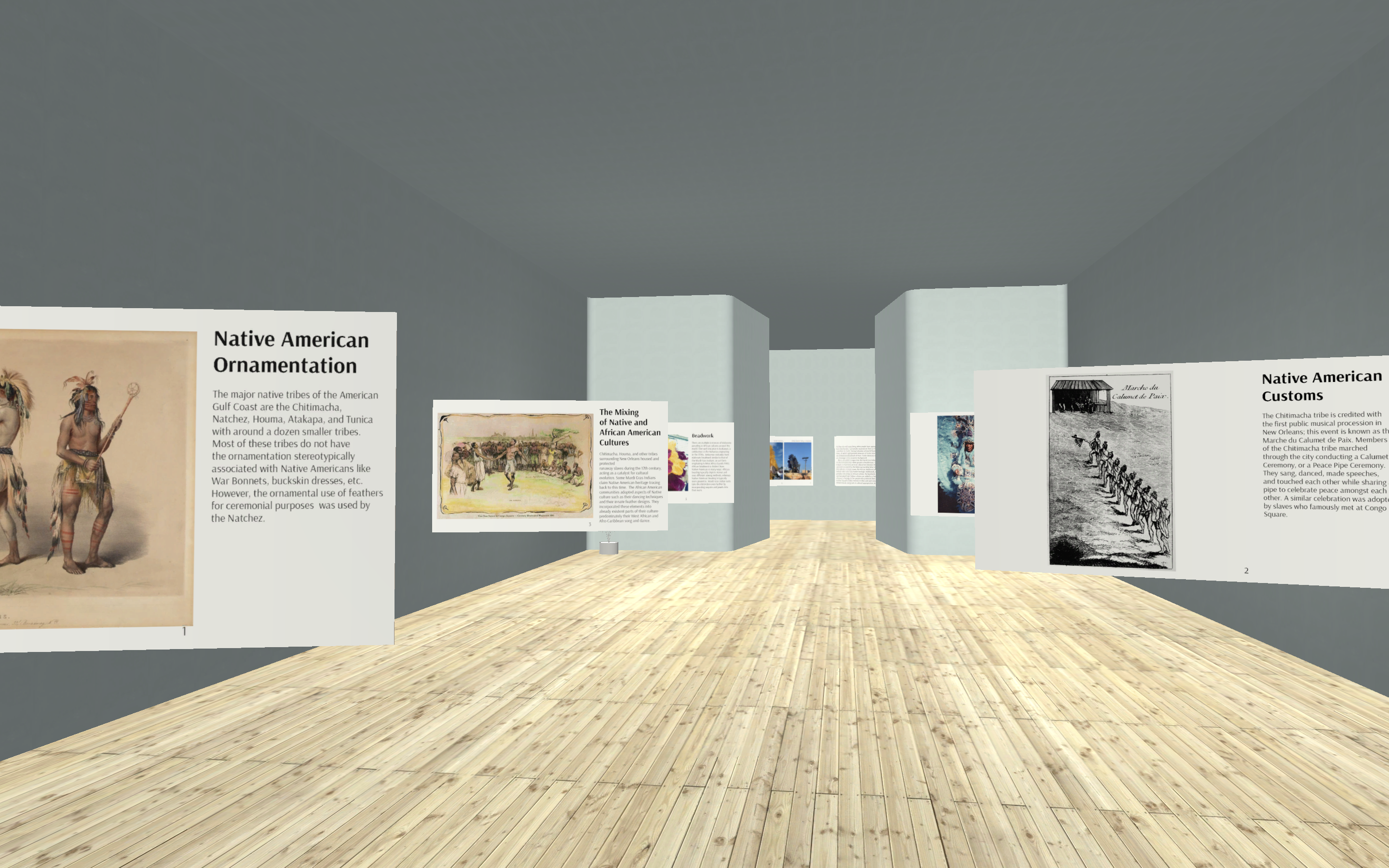 The major native tribes of the American Gulf Coast are the Chitimacha, Natchez, Houma, Atakapa, and Tunica with around a dozen smaller tribes. Most of these tribes do not have the ornamentation stereotypically associated with Native Americans like War Bonnets, buckskin dresses, etc. However, the ornamental use of feathers for ceremonial purposes was used by the Natchez. 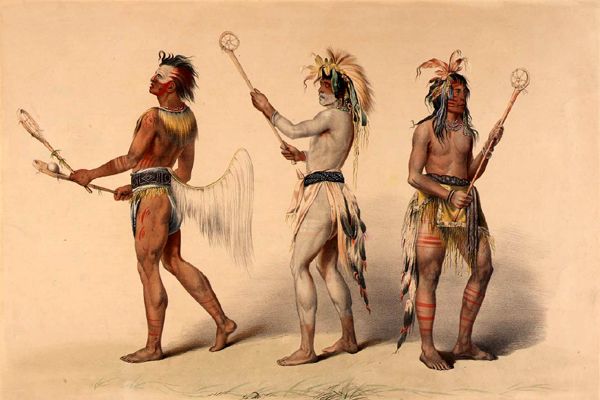 The Chitimacha tribe is credited with the first public musical procession in New Orleans; this event is known as the Marche du Calumet de Paix. Members of the Chitimacha tribe marched through the city conducting a Calumet Ceremony, or a Peace Pipe Ceremony. They sang, danced, made speeches, and touched each other while sharing a pipe to celebrate peace amongst each other. A similar celebration was adopted by slaves who famously met at Congo Square. 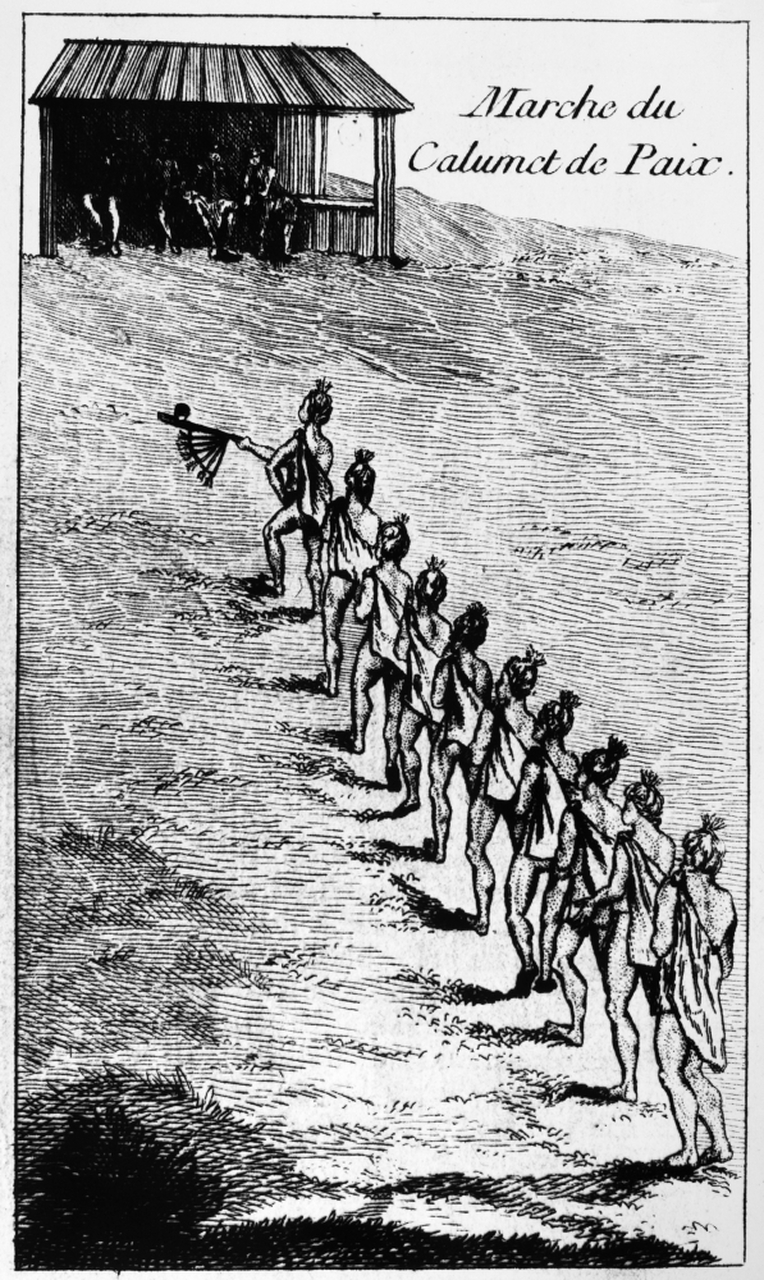 The Mixing of Native and African American Cultures

Chitimacha, Houma, and other tribes surrounding New Orleans housed and protected runaway slaves during the 17th century, acting as a catalyst for cultural evolution. Some Mardi Gras Indians claim Native American heritage tracing back to this time. The African American communities adopted aspects of Native culture such as their dancing techniques and their innate feather designs. They incorporated these elements into already existent parts of their culture- predominately their West African and Afro-Caribbean song and dance. 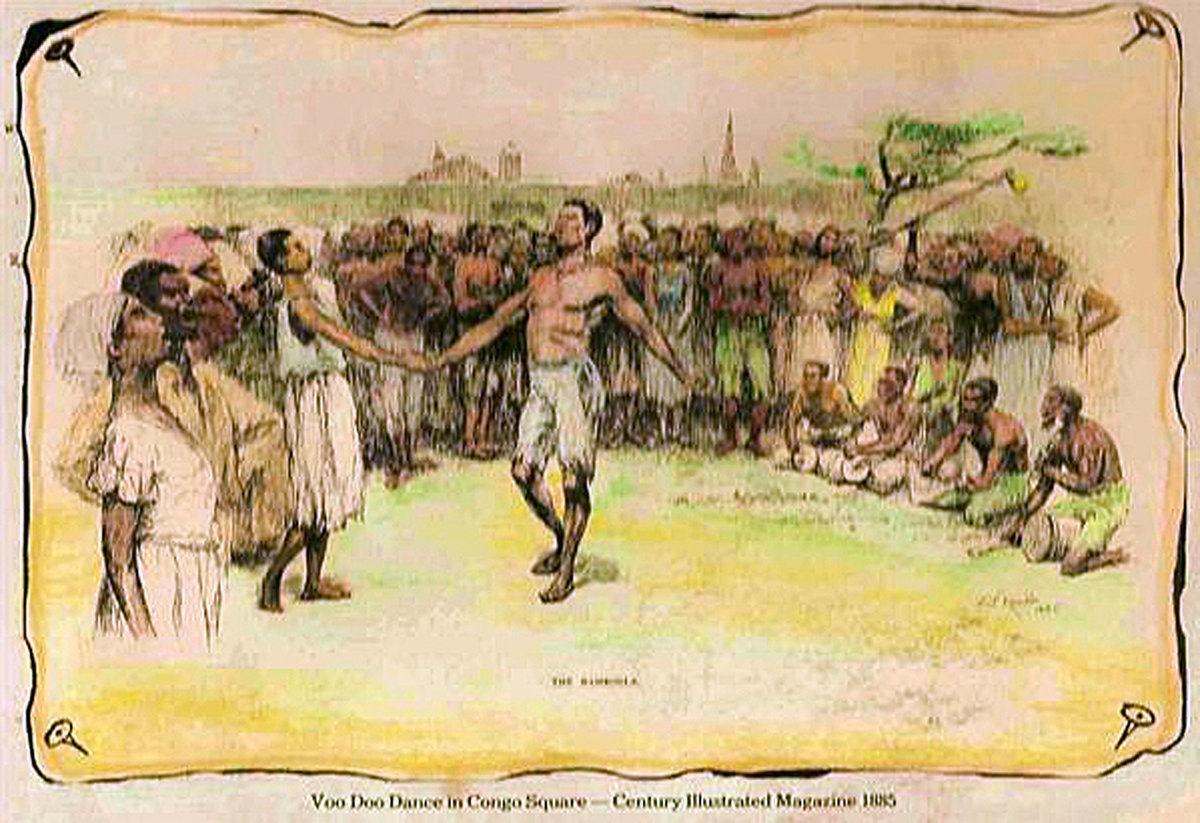 The first Mardi Gras Indians suited up and paraded during the Reconstruction era. Since then, multiple “tribes” have been created, all with different territory around New Orleans. With more tribes rose more competition and a fight to see who could create the best suit. This has led to the elaborate suits many see today during Mardi Gras and Super Sunday. The late Tootie Montana, former leader of the Tribe of the Yellow Pocahontas and known as the “Chief of Chiefs” has some of the most exquisite suits in the history of the Mardi Gras Indians (Reckdahl 2005). 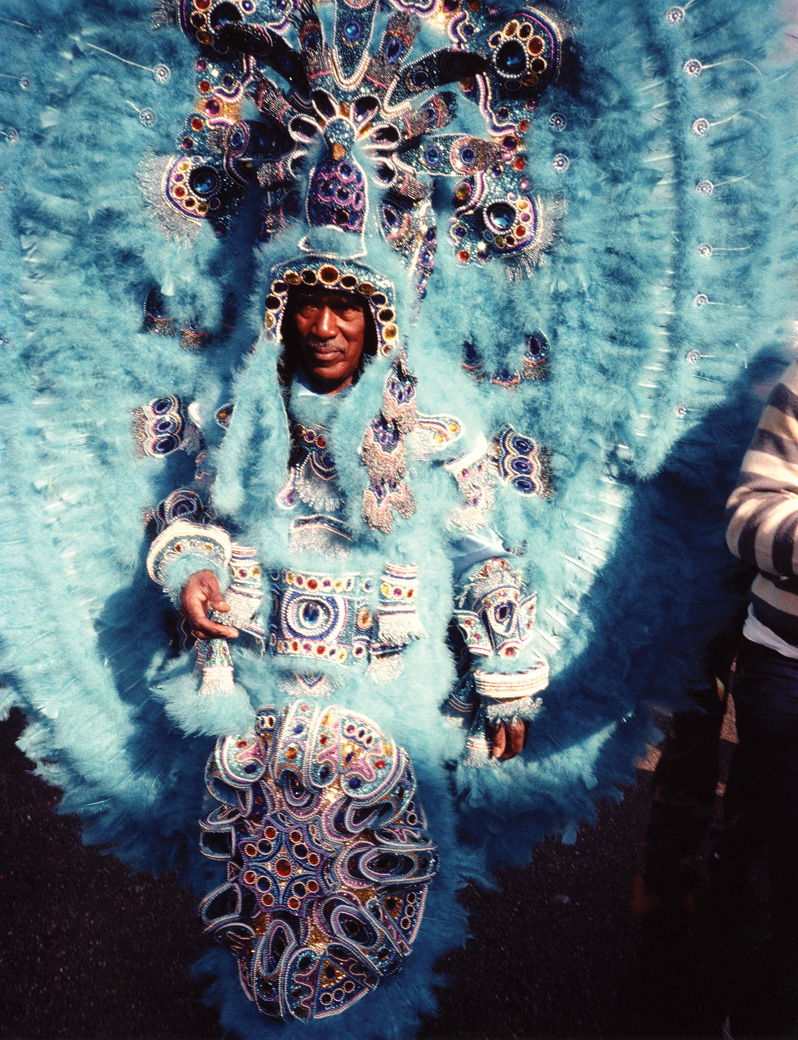 There are multiple instances of elaborate parading in African cultures around the world. One such instance is Junkanoo, a celebration in the Bahamas originating in the 1700s. Junkanoo costumes have elaborate beadwork similar to that of the Mardi Gras Indians, an art form originating in West Africa (Sands 1991). African beadwork is distinct from Native American in many ways. African beading typically depicts stories and uses different sewing methods, whereas Native American beading is typically more geometric. Mardi Gras Indian suits take the distinction even farther by incorporating sequins and jewels into their work. 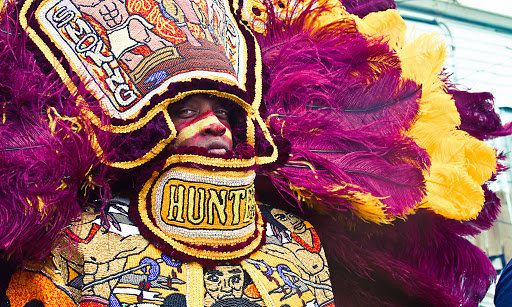 As they do with everything, white people have appropriated Mardi Gras Indian suits. They have been used in at least two Krewes. I personally experienced them at the parades of Endymion and Choctaw (the name of which is a problem in itself). During Endymion at least 8 floats were carrying women of varying races all dressed in suits, many of which appropriated elements of Tootie Montana’s suits. The suit pictured includes the Arc de Triomphe, an architectural landmark of Paris. Tootie Montana was known for incorporating architectural details in his suits as a homage to his carpenter background.

Many are quick to argue that the Mardi Gras Indians are appropriating from Native Americans, so they are no less innocent than white people in headdresses. The reason that it is not appropriation in the case of the Indians is that there are true cultural ties between African Americans and Native Americans. When slaves escaped and were accepted by the tribes surrounding New Orleans, they gained an appreciation and understanding of the cultures. In many cases, the African Americans and Native Americans married, leading to many Mardi Gras Indians who truly have Native heritage. Additionally, many of the aspects of the Mardi Gras Indian suits and parades are unique to African culture- the beadwork, the drum beats, the use of the aprons. The aspects which are borrowed from Native cultures are added as a homage to the Natives who saved African Americans in a time of need; a homage to the people who protected their ancestors. Meanwhile, white people have been notoriously hostile towards Native American tribes and were enslaving and murdering them throughout American history. White Krewes using suits is cultural appropriation, Mardi Gras Indians are cultural appreciation. 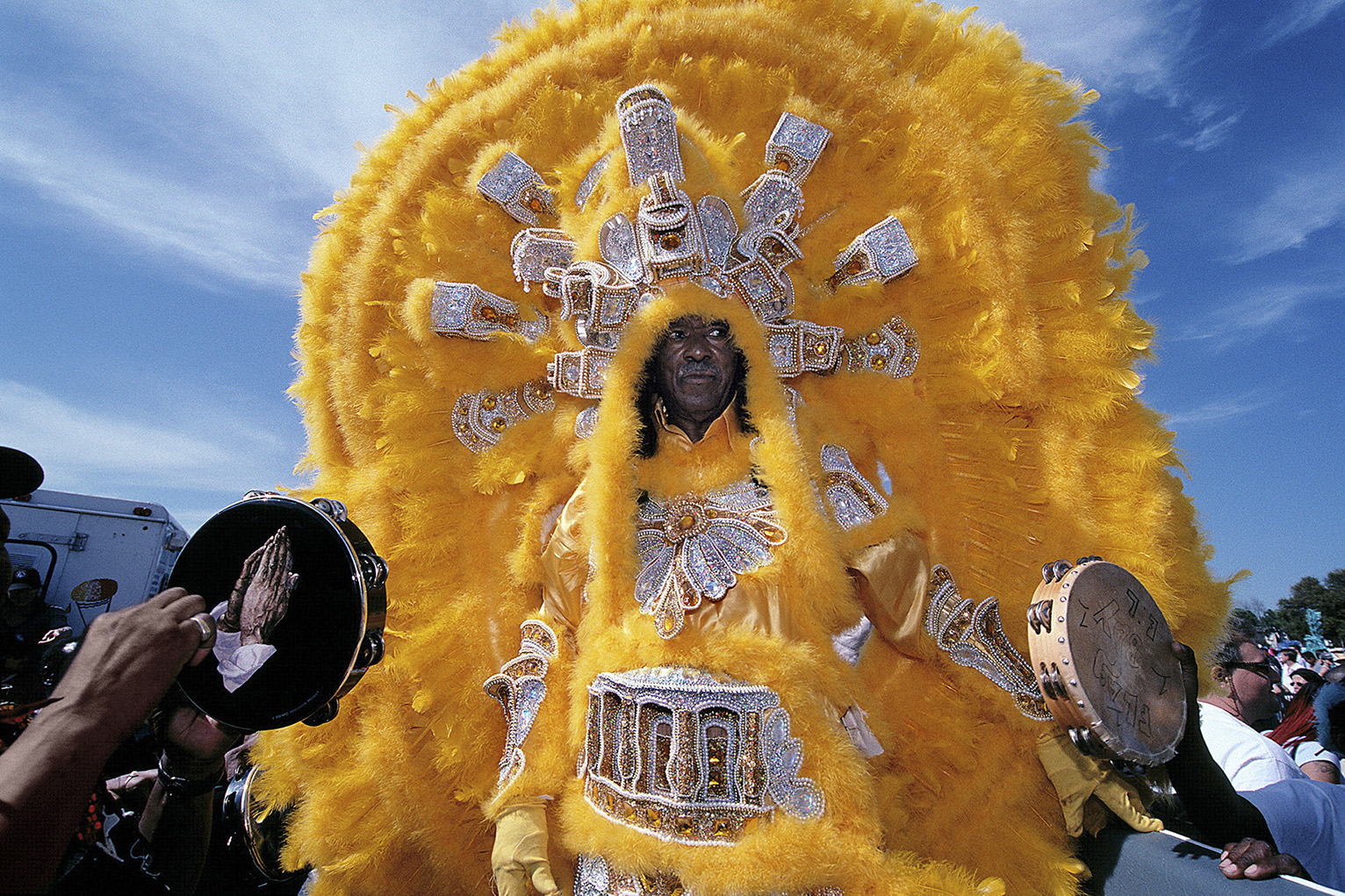 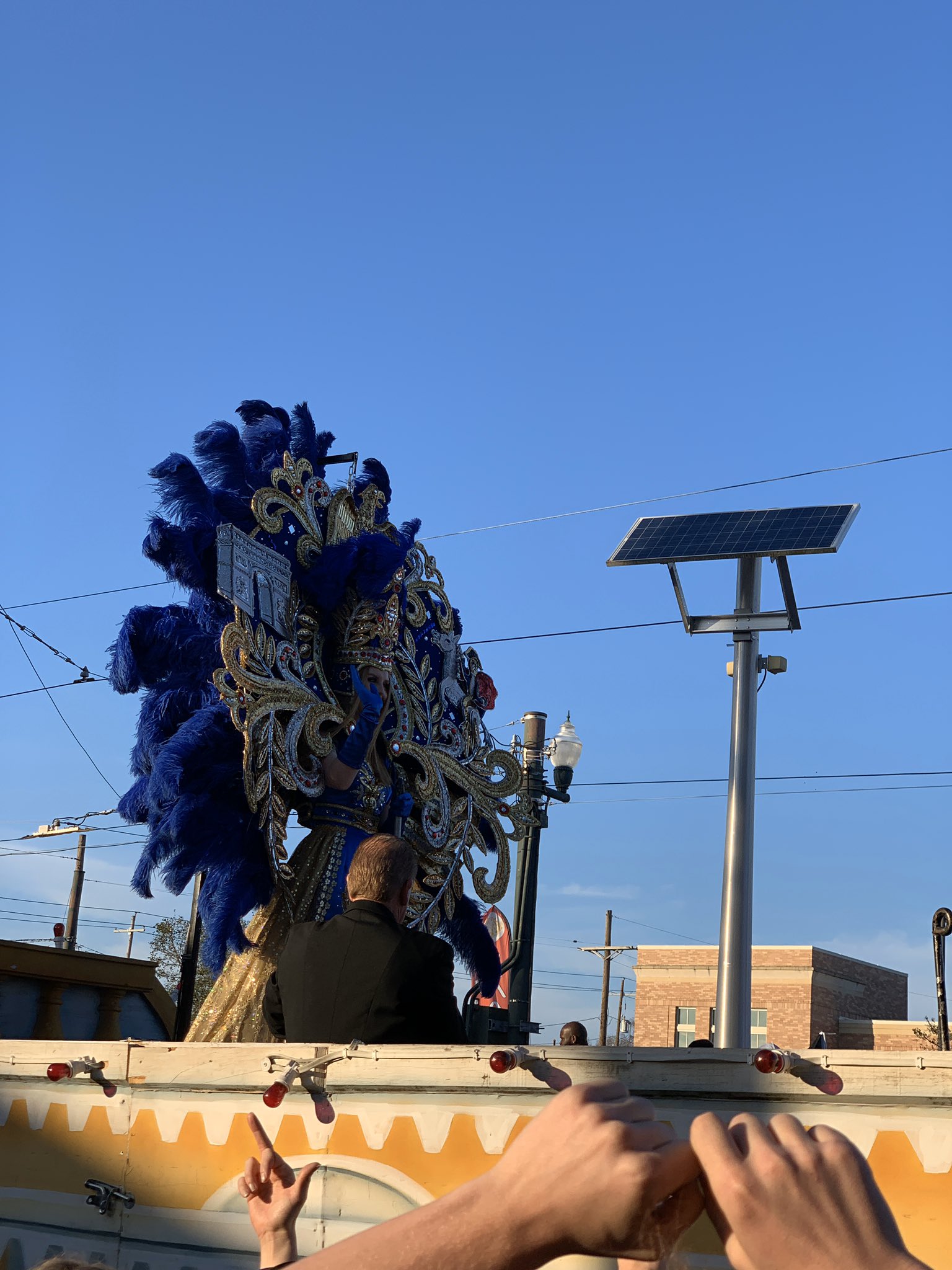 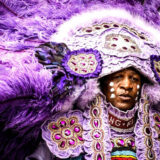 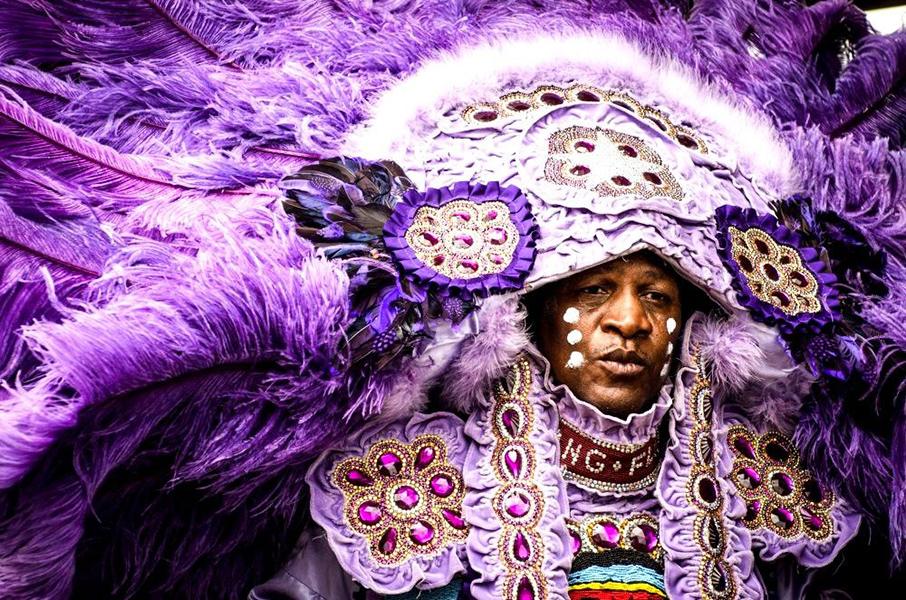 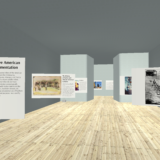 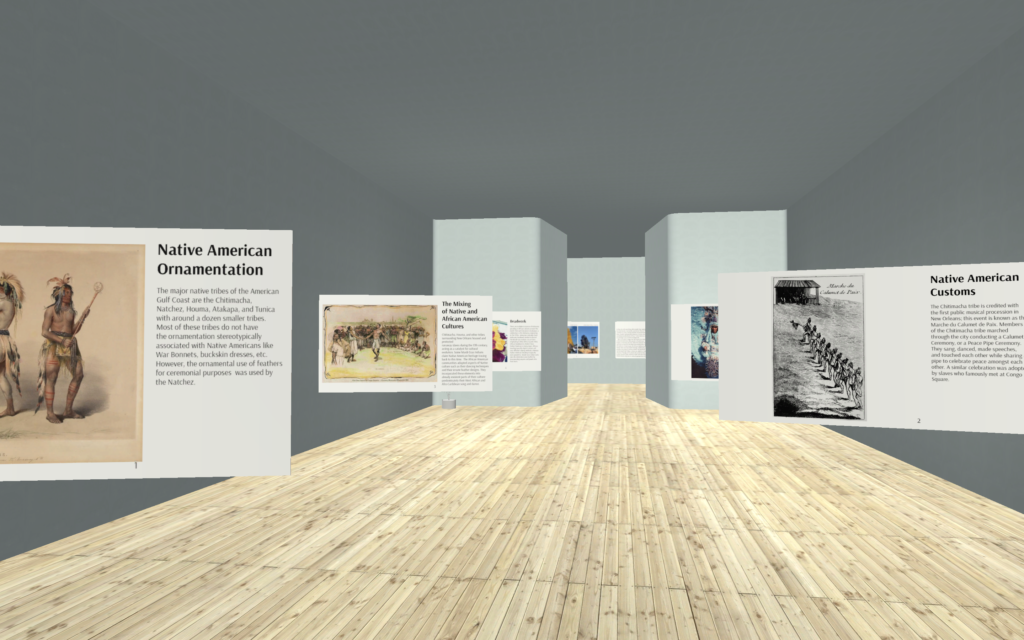 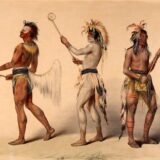 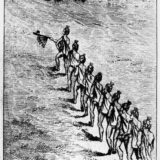 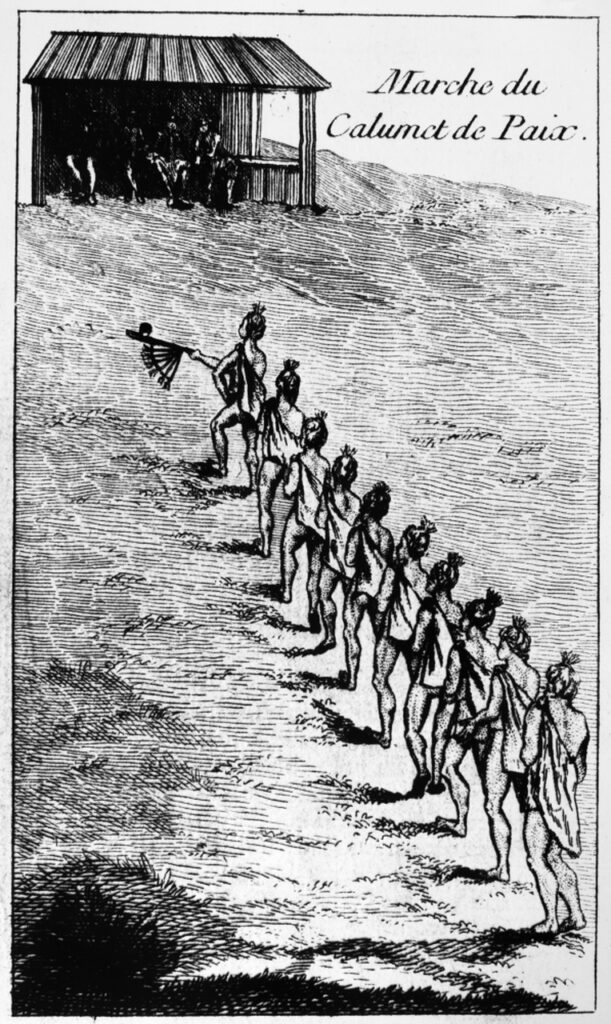 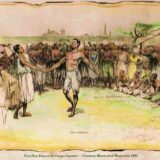 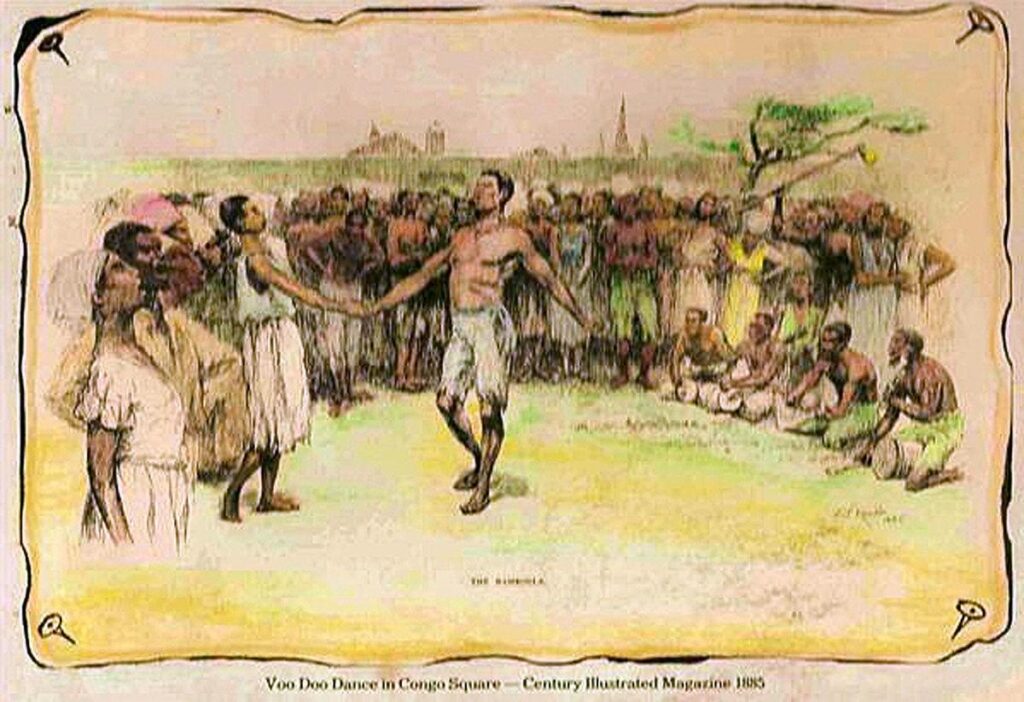 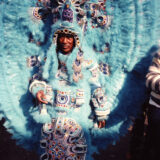 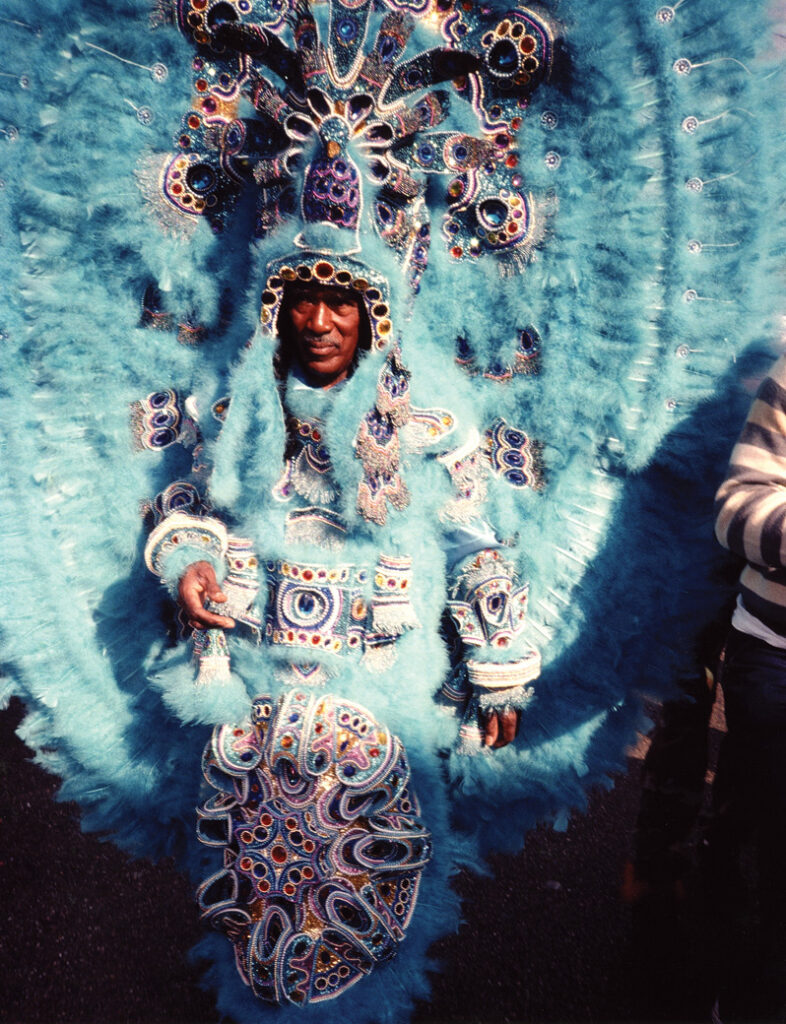 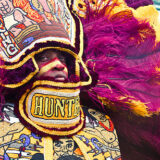 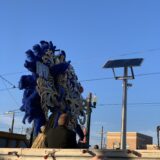 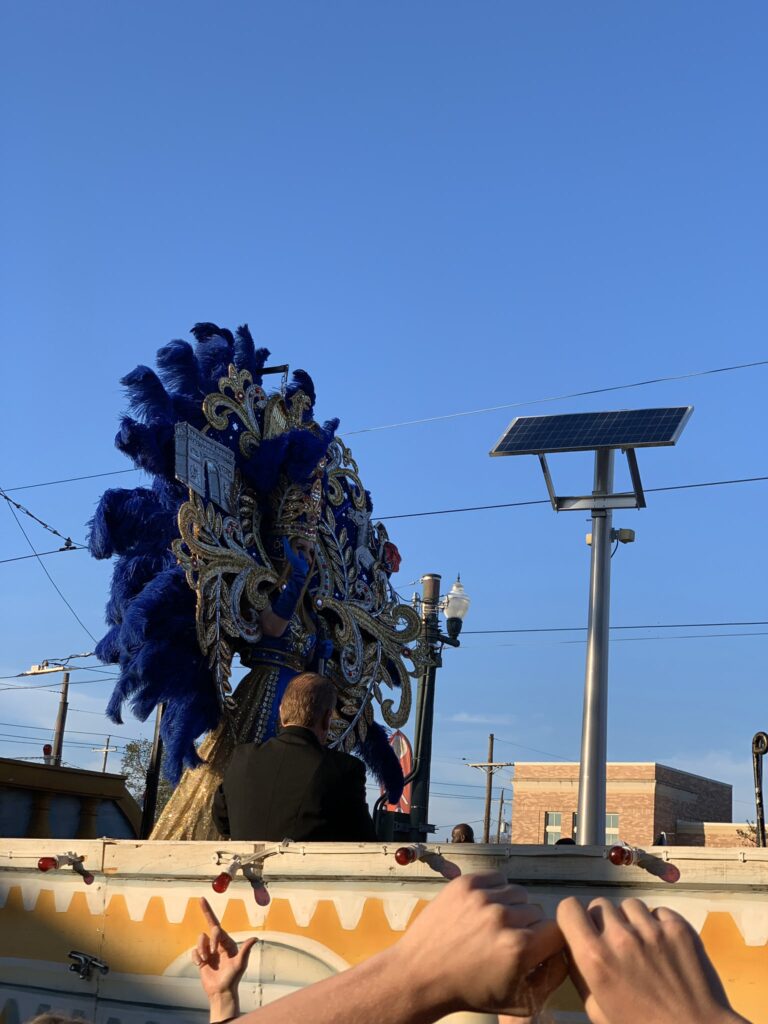 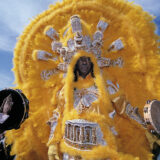 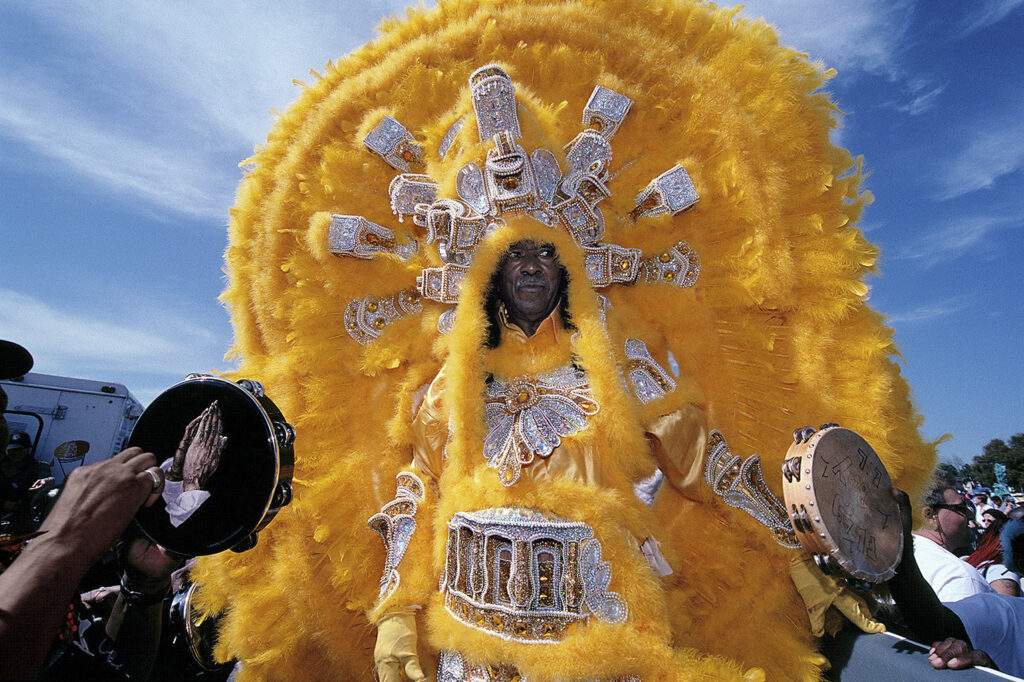